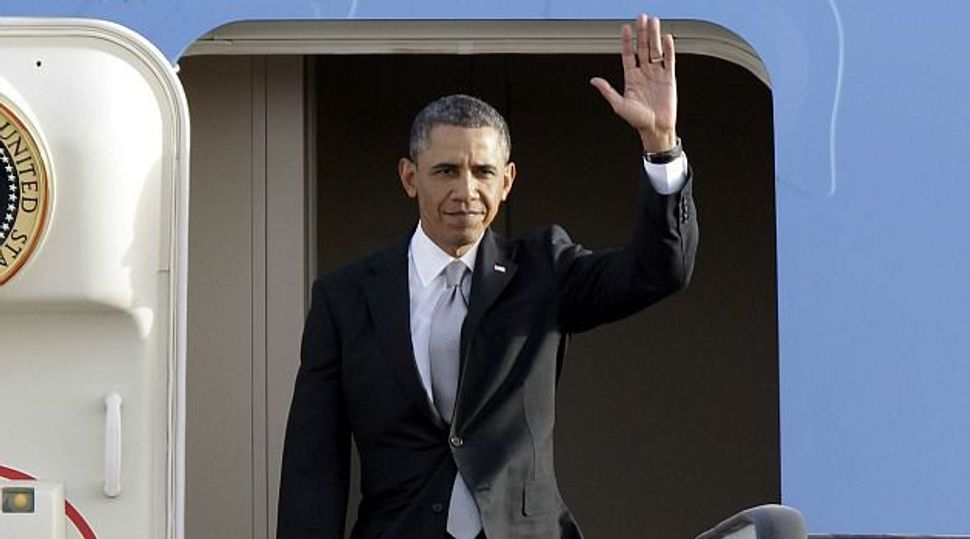 President Barack Obama flew out of Israel in a duststorm on Friday, leaving behind a trail of symbolic gestures and fine oratory that should help preserve the status quo at a time of regional upheaval.

In an unexpected diplomatic flourish, he also facilitated a surprise telephone call between the prime ministers of Israel and Turkey, putting two U.S. allies firmly on track to revive a once close relationship that had become badly frayed.

Obama set such low expectations for the three-day trip that he can easily proclaim it is mission accomplished, having wooed sceptical Israelis, eased their fears over Iran and shown Palestinians that he had not forgotten their aspirations.

True, many Palestinians remained disillusioned, feeling that Obama had buckled to Israeli pressure and backtracked from his previous demands for a halt to Jewish settlement building in the occupied West Bank on land they want for a future state.

But after a bruising first term of failed Middle East diplomacy, Obama’s prime concern seems to be that the situation does not get any worse, while keeping alive slender hopes that a comprehensive Israeli-Palestinian peace deal is still possible.

“This visit marks a resumption of American attention to the conflict, which is very important after two years of utter absence from the scene,” said Ghassan al-Khatib, an academic and a former Palestinian government spokesman.

“It probably won’t lead to any new negotiations, which in any case would be meaningless given the huge gulf between the two sides. But it might bring some accountability to the Israelis.”

Israeli Prime Minister Benjamin Netanyahu appeared highly satisfied by the public show of joviality displayed by Obama during their meetings, dispelling the frosty scowls and sniping that marked encounters over the previous four years.

“The atmosphere was much better than in all their meetings before,” said a senior Israeli official. “He gave the impression that he really wanted to start afresh,” he said of Obama.

Obama has already spent more time talking to Netanyahu than to any other world leader, according to the White House, and the pair put several more hours on the clock through this week.

Iran topped their initial agenda, aides said, with Obama seeking to build mutual trust and convince Israel that he was serious when he said he would not let Iran get nuclear weapons.

As a joint news conference on Wednesday, Netanyahu repeated that Israel had a right to defend its own national interests, but added that he was “absolutely convinced” Obama meant what he said – a strong statement seen as significant by some analysts.

“Now I think there is almost complete understanding between Israel and the United States on the Iranian issue,” said Amotz Asa-El, fellow at the Shalom Hartman Institute in Jerusalem.

“Specifically, they are waiting to see if the June election in Iran ignites some kind of social upheaval, a prospect that both Washington and Jerusalem obviously prefer,” he added, referring to a mid-year presidential poll.

Israel and Western powers believe Iran is looking to prepare a nuclear arsenal – something Tehran denies, while defending its right to enrich uranium for civil uses. Netanyahu has set a “red line” across Iran’s progress on enrichment, which he has said could be crossed in the spring or summer – hinting at unilateral military action unless the Islamic republic backs down.

Giora Eiland, a retired general and former Israeli national security adviser, said the prospect of such an attack was receding: “I think that the option still exists,” he said, “But that every day that passes lowers its chances of success.”

Reflecting Israel’s isolation in a largely hostile region, Obama engineered a call between Netanyahu and his Turkish counterpart on Friday, enabling the two U.S. allies to overcome a diplomatic crisis sparked by the deaths of nine Turks in 2010 during an Israeli commando raid off the Gaza Strip.

The move to normalise relations with a NATO member state that was one of its few Muslim friends in the region could help coordination to contain spillover from the Syrian civil war.

Yet if the tensions with Turkey unexpectedly eased, Obama’s visit did little to raise hopes that the decades-old Israeli-Palestinian conflict was any nearer resolution.

Going over the heads of Israeli leaders, who have questioned whether they have a viable negotiating partner on the other side of the separation barrier that twists through the West Bank, Obama appealed directly to ordinary citizens to push for change.

In a powerful speech to appreciative students, the U.S. president warned on Thursday that the Jewish state risked growing international isolation without a peace accord.

However, he did not bring any proposals on how to resume negotiations, which broke down in 2010, and he backed away from a previous demand for Israel to end settlement building, simply calling the construction an impediment to peace.

He promised that his new secretary of state, John Kerry, would dedicate much time and energy to the problem, but many Israelis saw his comments as a sign Washington would distance itself from a diplomatic quagmire familiar to his predecessors.

“The era when the USA pushed Israel and the Palestinians into a political process is gone,” said Gidi Grinstein, president of the Reut Institute, a Tel Aviv-based think tank.

“In the absence of American vision and strategy, considering Obama’s priorities and with the present positions of Israel and the Palestinians, the USA is basically saying: ‘You call us. We won’t call you’,” he added.

Although Palestinian President Mahmoud Abbas welcomed Obama’s speech, some of his political allies were more damning.

“Obama’s visit provides no clear way forward for a serious solution to the conflict,” said Wasel Abu Yousef of the Palestine Liberation Organisation. “It seems the U.S. is not interested in solving the conflict, but rather managing it.”