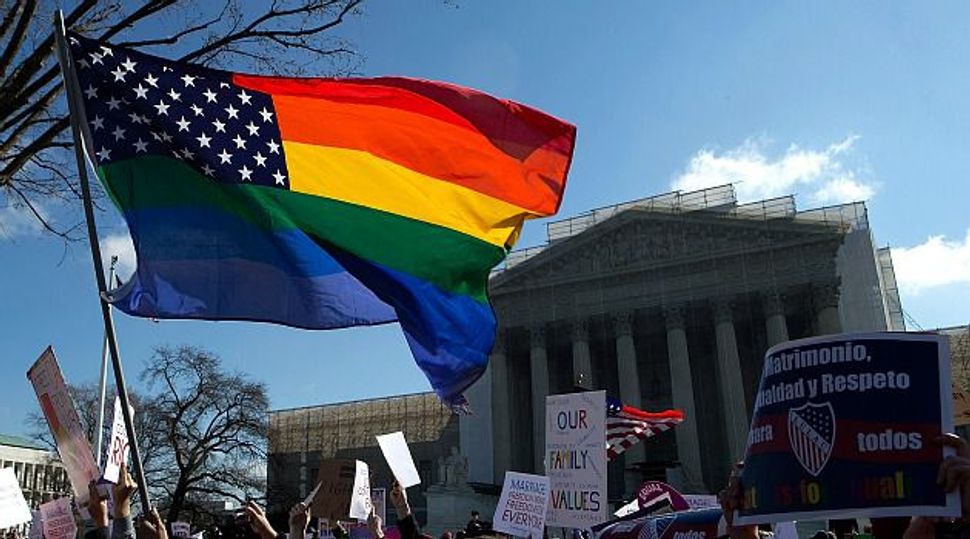 Yes and No: Protesters on both sides fo the gay marriage issue rallied outside the Supreme Court in Washington. Image by getty images

For nearly four years, proponents of same-sex marriage have been strategically building a test case aimed at convincing the conservative-leaning U.S. Supreme Court to declare that gay marriage is a constitutional right. The advocates felt they were ready.

But on Tuesday, after an intense, wide-ranging hearing, it appeared the justices were not.

Over the course of the 80-minute session, it seemed that for the array of gay rights supporters across the country, neither their greatest hopes nor worst fears would be realized.

A majority of the justices suggested by their comments and questions that they were not prepared to rule on whether a fundamental right exists for gays and lesbians to marry. Some justices even suggested that the specific case before them, testing the validity of a 2008 California ballot initiative that defined marriage as only between a man and woman, might not be resolved on the merits.

The justices return to the bench on Wednesday for the narrower question of whether the federal government may deny benefits to married same-sex couples that are allowed their opposite-sex counterparts.

The court has several options on how it might resolve that case, from a finding that the Republican-dominated congressional group defending the law lacks “legal standing,” resulting in dismissal, to a decision striking down the provision and robustly declaring that all laws tied to sexual orientation deserve tough judicial scrutiny.

That latter stance could eventually pave the way for gay marriage laws nationwide, well beyond the nine states and District of Columbia that now allow it. But from the tone of arguments on Tuesday, a majority would likely resist that route.

Justices across the ideological spectrum suggested they wanted to tread a cautious path in the cases that have become the most closely watched of the term.

The white marble and crimson velvet courtroom was crowded with nearly 400 spectators, some of whom had waited since last Thursday, in snow and rain, for seats. The paired cases have drawn a record number of “friend of the court” briefs and become the occasion for near daily declarations in support of gay marriage from public figures and prominent organizations.

Yet the justices do not seem ready for a role on centerstage in the matter. Justice Sonia Sotomayor, a liberal, questioned whether the issue should percolate a little longer in the states. Justice Samuel Alito, a conservative, asserted that the notion of same-sex marriage was newer than today’s ubiquitous cellphones and perhaps not ready for judicial intervention. And Justice Anthony Kennedy, the usual swing vote, likened the court’s possible journey in the case to going into “uncharted waters” or even over “a cliff.”

If the court avoids the looming question about a fundamental right, it could disappoint the two main lawyers pushing for same-sex marriage – Theodore Olson, who argued Tuesday, and David Boies, the legal partner who sat at his side. Yet, it would also mean that the worst-case scenario envisioned by other gay rights supporters would be avoided, too.

Their concern was certainly understandable. The Supreme Court’s past cases on gay rights in narrower contexts, in 1996 and 2003, were vigorously fought. Four of the current nine justices are new to the gay rights issue. The bench is not as predictable as in the past, and overall, because Alito replaced Sandra Day O’Connor in 2006, the court may be more conservative on social policy.

So in May 2009, when Olson and Boies, former opponents from the 2000 presidential election case of Bush v. Gore, suddenly filed their challenge to Proposition 8, many gay rights activists and leaders expressed concern. Advocates who had been concentrating their efforts in the states worried that a federal case could backfire with a decision upholding Proposition 8 and declaring no constitutional right to same-sex marriage.

But that outcome now seems unlikely. While Supreme Court justices sometimes reverse course from the tone of arguments, it seems no major constitutional ruling will emerge from the California case of Hollingsworth v. Perry.

Justices on the right and left questioned whether proponents of Proposition 8, who took up its defense after California officials declined, have legal standing.

“Have we ever granted standing to proponents of ballot initiatives?” Justice Ruth Bader Ginsburg asked lawyer Charles Cooper, representing Proposition 8 supporters. Cooper said no but stressed that California’s Supreme Court had ruled that under state law the backers of Proposition 8 should be allowed to defend it.

Chief Justice John Roberts voiced doubt, saying that “a state can’t authorize anyone to proceed in federal court,” because federal judges themselves determine who may bring claims.

Yet these questions of legal standing were in the case when the appeal from Proposition 8 supporters arrived on the Supreme Court’s doorstep last year. And the court nonetheless took the appeal. It requires only four of the nine justices to accept a case for oral arguments; it takes five to resolve it.

Perhaps the thorny procedural hurdles became more obvious as the justices prepared for Tuesday’s hearing. Or, perhaps that area might be the only one of common ground. There appeared to be no majority for either side’s constitutional assertions.

Cooper argued that the states may limit marriage to heterosexual couples because of their interest in procreation and child rearing. Justice Elena Kagan, particularly, hammered at that notion, asking whether the court could block an older couple, possibly beyond their fertile years, from marrying.

Olson argued that Proposition 8 “walls off gays and lesbians from marriage,” the most important relationship they might have. Roberts expressed doubt that California was plainly excluding a particular group. “When the institution of marriage developed historically, people didn’t get around and say ‘let’s have this institution, but let’s keep out homosexuals.’ The institution developed to serve purposes that, by their nature, didn’t include homosexual couples.”

Justice Antonin Scalia, who has been the most outspoken opponent of gay rights on this court, challenged Olson to say exactly when same-sex marriage became the constitutional norm.

Olson could not but rather asserted: “It was constitutional when we as a culture determined that sexual orientation is a characteristic of individuals that they cannot control. There is no specific date in time. This is an evolutionary cycle.”