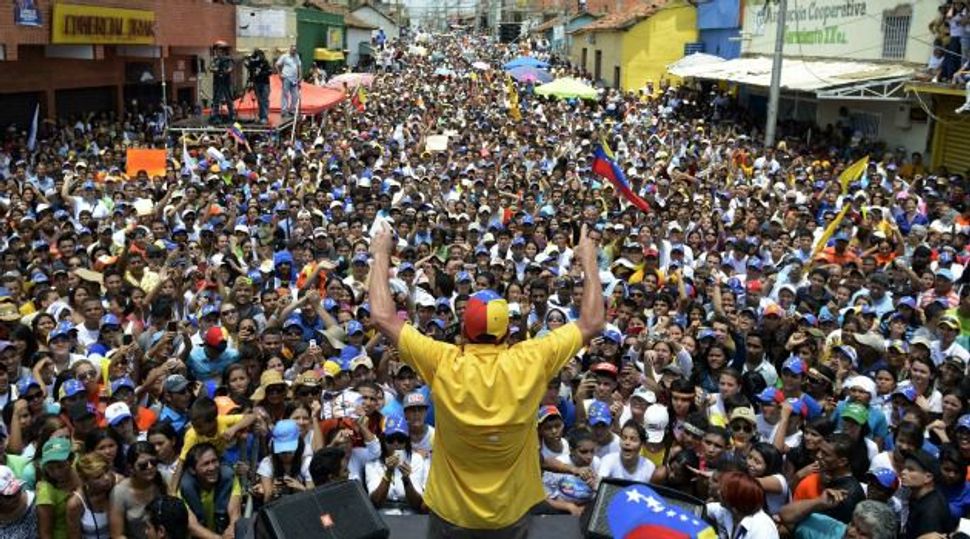 The buildup to the South American OPEC nation’s April 14 vote has been characterized by highly personalized attacks between both candidates hoping to replace the late Hugo Chavez.

At the weekend, Maduro compared opposition complaints about Cuban doctors working in Venezuela with the persecution of Jews in Nazi Germany. “The heirs of Hitler are leading a campaign in Venezuela against the Cuban people,” he said.

At a news conference, Capriles, who is a descendant of Polish Jews on his mother’s side, condemned that remark as intolerant and ignorant.

“Does he know who Hitler was? If he does, then what he said was atrocious, because he’s saying that those who do not think like him are killers,” said Capriles, 40, whose maternal grandparents, the Radonskis, fled anti-Semitism in Poland.

“I think they’re a bit confused and muddled … Everyone should be shown respect by those of us aspiring to govern.”

Both Maduro, a former bus driver and foreign minister named by Chavez as his preferred successor to continue socialism in Venezuela, and Capriles, a centrist state governor, will launch their formal election campaigns on Tuesday.

Polls have given Maduro, 50, a large lead, thanks in part to the wave of sympathy over Chavez’s death from cancer on March 5.

The latest, by local pollster GIS XX1, which is viewed as close to the government, projected that Maduro would win with 55 percent of votes, versus 45 percent for Capriles.

During a lengthy chat with reporters, Capriles also criticized Maduro’s use of state resources for his campaign, and promised a 40 percent rise in the minimum wage to compensate for a devaluation of the local bolivar currency.