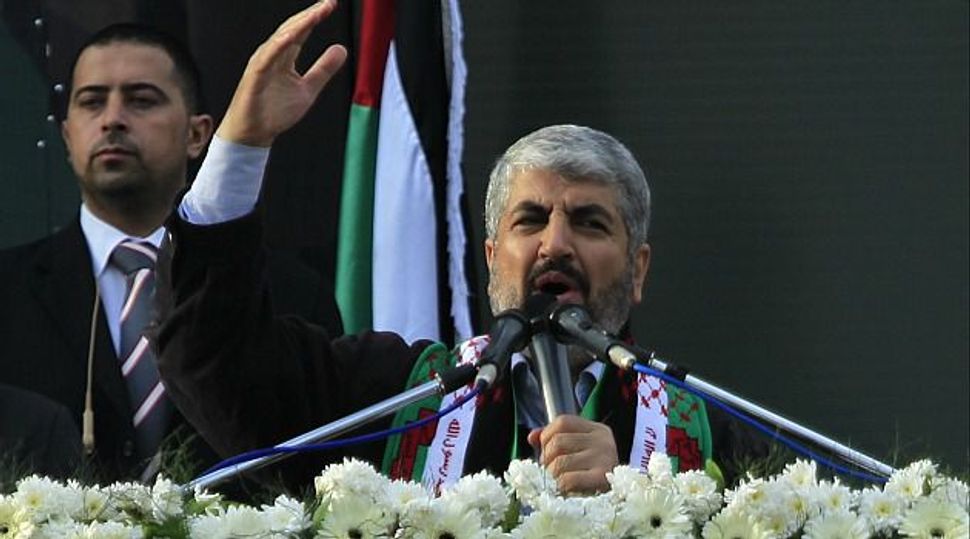 The Islamist Palestinian Hamas group re-elected the relatively pragmatic Khaled Meshaal as its leader on Tuesday, despite past criticism of him by hardliners in the Hamas-ruled Gaza Strip.

A diplomat in the region said Egypt and Qatar had lobbied strongly on behalf of a reluctant Meshaal before the vote in Cairo by about 60 Hamas leaders who had met through the night.

Born in the Israeli-occupied West Bank, Meshaal, 56, has lived in exile for decades and, like his Hamas comrades, rejects Israel’s right to exist. But he played a vital role in indirect, Egyptian-mediated talks between Israel and Hamas to secure a truce that ended an eight-day Gaza war four months ago.

And Meshaal drew criticism last year from Hamas’s Gaza-based leadership over what some officials saw as a personal initiative to heal a rift with Western-backed Palestinian President Mahmoud Abbas, whose rival Fatah party lost control of the Israeli-blockaded enclave in a brief civil war in 2007.

In a terse statement, a Hamas official said only that Meshaal had been re-elected in the Cairo meeting.

The diplomat in the region, who asked not to be identified, said Egypt’s Islamist leadership and the wealthy Gulf emirate of Qatar had backed Meshaal, who had earlier promised to step down.

“They saw Meshaal as a moderate and an example of a leader who saw the world more comprehensively than other (Gaza-based) hardliners in the group,” said the diplomat.

Meshaal left Damascus, where Hamas had a headquarters, about a year ago after the Sunni Islamist militant movement broke with President Bashar al-Assad over Syria’s civil war.

In December, Meshaal travelled from Egypt to make his first visit to Gaza, where he told a rally he would never recognise Israel and pledged to “free the land of Palestine inch by inch”.

Once treated as a pariah by many U.S.-allied Arab leaders, Hamas has seen its standing in the region rise on the back of Arab uprisings that have ushered in more sympathetic Islamist governments in Egypt and elsewhere.

Israel, the United States and most Western governments view Hamas as a terrorist group for its refusal to recognise the Jewish state or to renounce violence that included suicide bombings in a Palestinian uprising a decade ago.

“I do not say Europe is going to open up to Hamas tomorrow,” said the diplomat, but added that a “real engagement with the West” was possible if Meshaal persuaded Islamist colleagues to change their policies.

Palestinian political analyst Hani al-Masri said Meshaal’s re-election signalled that Hamas was showing a desire for more moderation in order to build bridges with the West, but “it did not mean that Meshaal was a man who raises a white flag”.

Meshaal burnished his credentials within Hamas after surviving an Israeli assassination attempt in Jordan in 1997 and succeeded the group’s founder, Sheikh Ahmed Yassin, in 2004 after Israel assassinated the wheelchair-bound cleric.

Hamas, which has close links to Egypt’s Muslim Brotherhood, was founded in 1988 soon after Palestinians launched an uprising against Israel. Yassin was killed during a second revolt.

Despite falling out with Syria, Meshaal has sought to maintain ties with Iran, an Assad ally which supplies weapons to Hamas, including rockets the group has fired at Israeli cities.

Israel has struck repeatedly at militants in Gaza, attacks that have sometimes caused heavy casualties among civilians in the impoverished, densely-populated coastal territory.

Meshaal, who now divides his time between Cairo and Qatar, has tried to overcome his differences with Abbas, who supports a two-state solution to the Israeli-Palestinian conflict.

His re-election, said senior Fatah official Mahmoud al-Aloul, “may boost chances of reconciliation (with Abbas), but that does not mean it would be done, given remaining disputes within Hamas”.