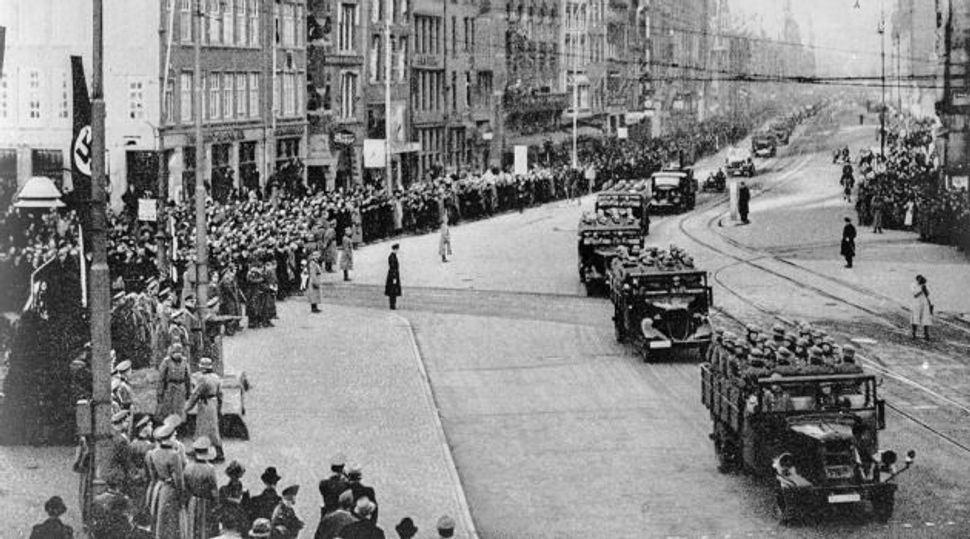 German Invasion: Jews who were deported to concentration camps by the Nazis were still charged taxes by the city of Amsterdam and even fined when they failed to pay. Image by getty images

The City of Amsterdam fined hundreds of Jewish Holocaust survivors for failing to pay taxes while they were in hiding or in concentration camps.

The affair was exposed in an article in Het Parool, a local daily, on March 30. Many of the houses in question were confiscated and used by members of the NSB Dutch Nazi party while the Jewish owners were in hiding or in camps.

The city went after survivors as late as 1947, the report said. Other Dutch municipalities waived such debts, Het Parool reported. The following year the city agreed to reimburse half of what it charged to some Jews who were taxed in absentia. The city’s archives contain 342 requests for reimbursement, Het Parool reported.

The documents about this taxation were discovered by Charlotte van den Berg, a 23-year-old university student. She said she found them bundled with an elastic band in the archive section of one of the city’s departments while conducting research on Jewish home owners.

A spokesperson for the city told the daily the city would investigate the matter, including how much money was collected from Holocaust survivors, together with the NIOD Institute for War, Holocaust and Genocide Studies.

About 75 percent of Holland’s pre-World War II Jewish population of 140,000 was murdered in the Holocaust, according to the Center for Information and Documentation on Israel, a Hague-based watchdog on anti-Semitism which is known locally by its acronym CIDI.

Ronny Naftaniel, CIDI’s senior advisor, told JTA that although the discovery was “shocking,” there have been various reports of the city’s conduct after World War II, though “few facts were known. The City of Amsterdam has never, to my knowledge, taken steps to correct its actions,” said Naftaniel, who used to serve as the treasurer of Holland’s Central Jewish Board, or CJO.