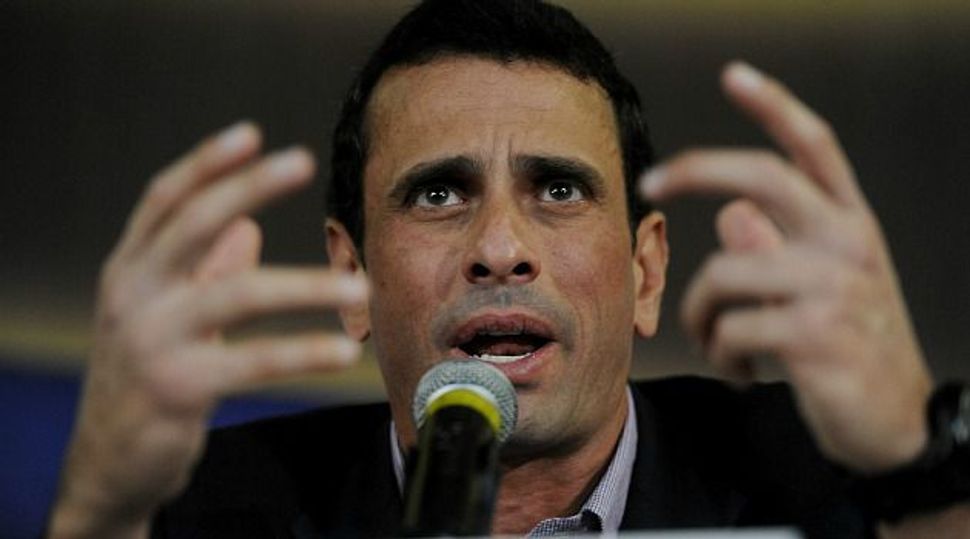 Trailing in opinion polls ahead of the April 14 vote, Henrique Capriles is attacking acting President Nicolas Maduro and other senior officials as a corrupt and incompetent coterie unable to solve Venezuelans’ basic problems.

“They talk of socialism, but it’s on the surface only. Look how those well-connected ones live, what they wear, what cars they go round in, how many bodyguards they have,” Capriles said.

“They are skin-deep socialists only. Their behavior, I’d say, is savage capitalism. They love traveling. During Easter, they were all off to La Orchila,” he added, referring to a military-run island in the Caribbean off Venezuela.

The 40-year-old state governor is trying to persuade voters that rival candidate Maduro is a far cry from Chavez, who died of cancer a month ago.

But passions are still running high over Chavez’s death, Maduro is presenting himself as the president’s “son” and “apostle,” and “Chavista” supporters are largely expected to obey their beloved leader’s dying wish to support Maduro.

Nevertheless, Capriles’ attack on Wednesday went to the heart of a common complaint from rank-and-file “Chavistas” that senior officials are out of touch with the people’s problems, and too concerned with feathering their own nests.

“My fight is against the corrupt ones,” Capriles added, in an unusual meeting with leftists who support him.

Perpetuating the class rhetoric common during Chavez’s 14-year rule, Maduro and his supporters attack Capriles daily as a “little bourgeois” who is a puppet of Venezuela’s wealthy elite and their friends in the United States.

Maduro, 50, is a former bus driver who rose to become Chavez’s vice president, while Capriles, 40, comes from a wealthy family with extensive business interests.

The opposition candidate, who has governed populous Miranda state since 2008, said his record on building schools and anti-poverty measures spoke for itself.

“One ruling party leader said to me, ‘Capriles, a single finger of yours is more revolutionary than the whole body of the candidate they have imposed on us,’” said Capriles, referring to a recent visit to the coastal town of Punto Fijo.

“Our people should open their eyes and wake up … What we have is bad leaders who have no idea how to resolve problems.”

Opinion polls give Maduro a formidable lead of between 11 and 20 percentage points over Capriles, but some analysts think the gap could narrow before election day.

On the campaign trail, Maduro has lacked the charisma of his former boss, but he has covered himself in Chavez symbols and images. Most of his rallies begin with a recording of Chavez singing the national anthem.

On Tuesday, sitting in the garden of the humble rural home where Chavez grew up, Maduro even said Chavez had appeared to him in the form of a little bird that flew above his head and sang to him while he was praying in a chapel.

“I felt his spirit, like a blessing, saying ‘the battle starts today, onward to victory, you have my blessing.’”

He repeated the story on Wednesday during a rally in the western Andean state of Tachira, condemning the mockery from opposition supporters that his tale had provoked. “God forgive them their bad ways and hatred,” he said.

As well as working-class credentials that play well with loyal “Chavistas” and the late president’s personal blessing, Maduro has a well-financed state apparatus behind him.

He also has the goodwill of millions who have benefited from Chavez’s oil-funded welfare programs, or “missions.”

Capriles, who calls himself a “progressive” and has mainly center-left views and policy proposals, wants to follow Brazil’s model of free markets with strong social welfare protection.

“They will never return!” Maduro thundered to the crowd in Tachira on Wednesday. “This victory will be for Chavez!”