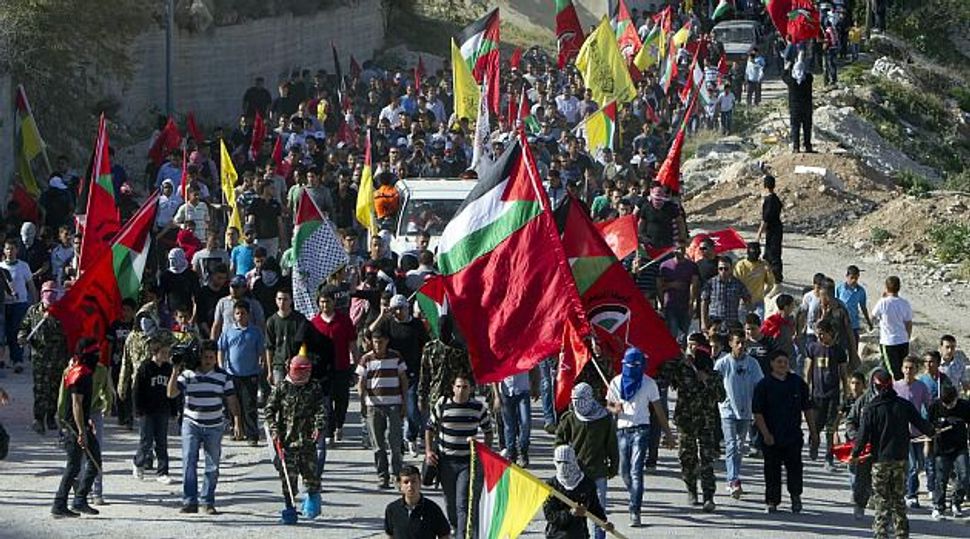 Wave of Unrest: Palestinian students protest the death of a prisoner in Israeli captivity. Two teenagers were killed in demonstrations across the West Bank. Image by getty images

Thousands of mourners turned out on Thursday for the funerals of three Palestinians, including two teenagers killed by Israeli army gunfire in some of the worst violence in the occupied West Bank in years.

The upsurge in unrest was triggered on Tuesday by the death of Maysara Abu Hamdeya, a 64-year-old prisoner serving a life term in an Israeli jail and suffering from cancer.

Palestinian officials accused Israel of delaying treatment for Hamdeya and gave him full military honours at a funeral on Thursday in Hebron, where masked gunmen fired into the air as his body arrived at a mosque in the divided West Bank city.

In the wave of disturbances that followed his death, four Palestinian youths threw firebombs at an Israeli checkpoint near Tulkarm in the northern West Bank on Wednesday, the army said.

Soldiers returned fire and killed two teenagers from the nearby town of Anabta – Amer Nassar, 17, and Naji Belbisi, 18.

Palestinian President Mahmoud Abbas said Israel’s use of lethal force showed that it wanted to “provoke chaos” in the Palestinian Territories and avoid any moves toward a peace deal.

The wave of violence erupted two weeks after U.S. President Barack Obama paid his first official visit to the region, urging the Israelis and the Palestinians to resume long-stalled peace talks but offering no initiative to break the deadlock.

U.S. Secretary of State John Kerry is scheduled to travel to Jerusalem again next week to review the stalemate.

The United Nations office for the Coordination of Humanitarian Affairs said Israeli forces had killed nine Palestinians, most of them in clashes in the West Bank, so far this year, compared with three in the same period in 2012.

The bodies of Nassar and Belbisi, their blood-stained faces clearly visible, were carried on stretchers through the packed streets of Anabta, held aloft by uniformed members of the Palestinian security forces.

“O martyrs rest, rest. We will continue the struggle,” the crowds chanted as the lifeless teenagers passed by.

Israeli officials urged Palestinian leaders to push for calm, and dismissed suggestions that a third uprising, or Intifada, was brewing in the West Bank – territory Israel captured in the 1967 Middle East war and which is now home to more than 340,000 Jewish settlers.

“The term ‘Third Intifada’ is meant to describe a general breakdown and uprising … There are no powers there pushing for a third Intifada or general uprising,” senior defence official Amos Gilad told Israel Radio.

Underscoring the potential for more violence, the Israeli army said that for a third straight day, a rocket fired from the Gaza Strip struck southern Israel on Thursday. No casualties or damage were reported.

Following initial rocket fire on Tuesday, Israeli jets carried out their first air strike on Gaza since a truce ended several days of fighting in November.

An al Qaeda-linked group, Magles Shoura al-Mujahadeen, claimed responsibility for rocket attacks on Tuesday and Wednesday, saying it was responding to the death of Hamdeya.

Israel says Gaza’s ruling Hamas movement bears overall responsibility for any rocket fire and has urged Egypt, which helped broker the November truce, to use its influence with the Islamist group.

“The Egyptians are very active. Dialogue with them is constant and their interest is in keeping stability and preventing firing, violence and terrorism,” Gilad said.

For the second time this year, the death of a Palestinian prisoner has sparked widespread anti-Israeli disturbances.

In February, Arafat Jaradat, 30, died after an interrogation session. Palestinian officials said he had been tortured, an allegation Israel denied.

Palestinians say Hamdeya complained of feeling sick last August, but was only discovered to be suffering from cancer in January. They say he did not receive adequate treatment and should have been released because of the gravity of the illness.

Israelis said Hamdeya, serving a life term for attempted murder after sending a suicide bomber to a Jerusalem cafe, was a heavy smoker and had received adequate care.