No Deal in Sight on Final Day of Iran Nuclear Talks 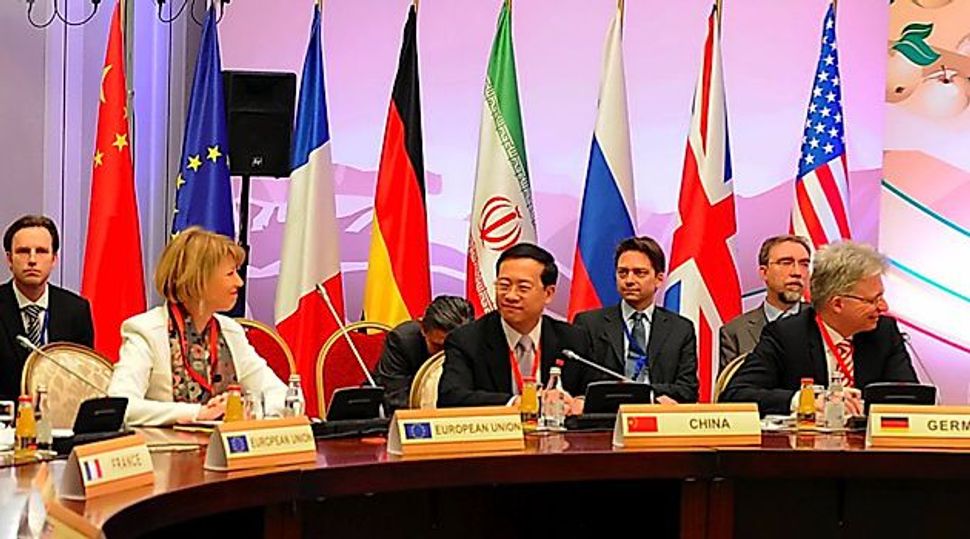 Six world powers and Iran met for a second day on Saturday with scant hope of striking a breakthrough deal to ease concern that Tehran may be trying to develop nuclear weapons capability, a dispute that could escalate into a new Middle East war.

Negotiators failed to narrow their differences when the two-day meeting began on Friday, which followed a round of talks in February, also in Kazakhstan’s commercial hub, Almaty.

The final day of negotiations was unlikely to achieve more than a willingness to keep talking. Iran responded on Friday to an offer of limited relief from sanctions with a proposal of its own that puzzled Western diplomats and which Russia said raised more questions than answers.

Iran’s critics accuse it of covertly seeking the means to make nuclear bombs and say Tehran in the past has used diplomacy as a stalling tactic. Further inconclusive talks will not reassure Israel, which says it could launch air strikes to stop its arch-enemy from getting the bomb, if necessary.

The Jewish state is widely believed to have the Middle East’s only nuclear arsenal.

With all sides aware that a breakdown in diplomacy could move the stand-off a step closer to war, no one in Almaty was talking about abandoning diplomatic efforts. But an actual deal seemed as far away as ever.

“We had a substantive exchange. But there is still a wide gulf between the parties. We are considering how we move on from here,” said one Western diplomat after Friday’s discussions.

Iranian state television said Iranian officials also conducted very “fruitful” bilateral meetings with the Chinese and Russian delegations before the wider negotiations resumed at around noon (0600 GMT), but it gave no details.

Beijing and Moscow – which both have commercial ties with Tehran – have backed U.N. Security Council sanctions resolutions imposed on the Islamic state since 2006 but have criticised separate, harsher Western punitive steps against the big oil producer.

The talks between Iran and the powers later adjourned for lunch before resuming around 4.30 p.m. (1030 GMT), the semi-official Iranian news agency Fars said.

With a presidential election due in Iran in June, scope for a breakthrough was slim even before the first day of talks, when Iran declined to accept or reject an offer of modest sanctions relief in exchange for curbing its most sensitive nuclear work.

Iranian deputy negotiator Ali Bagheri said Iran had given a “detailed response to all the questions”.

Russian Deputy Foreign Minister Sergei Ryabkov said: “Iran has given an answer to the proposals of the six powers. It is the kind of answer that creates more questions … But this shows that the negotiations are serious.”

Without substantial progress in coming months, Western governments are likely to increase economic sanctions on Iran.

“It seems that instead of narrowing, the gap between the sides (has) actually widened,” said Ali Vaez, an Iran expert with the International Crisis Group.

The talks were held against a backdrop of soaring tension between big powers and North Korea, which like Iran is defying international demands to curb its nuclear programme. But unlike North Korea, which has carried out three nuclear tests since 2006, Iran says its nuclear energy activity is entirely peaceful.

In Almaty, the United States, Russia, China, France, Britain and Germany tried on Friday to persuade Iran to abandon its higher-grade uranium enrichment, as a first step to a broader agreement. But deputy negotiator Bagheri indicated that Iran wanted to know how and when its main concerns would be addressed before it agreed to any intermediate steps.

Iran, which denies seeking nuclear weapons, wants major economic sanctions – including on its oil exports and banks – lifted and its right to enrich uranium publicly recognised.

The six nations, however, say this right only applies when nuclear work is carried out under extensive oversight by U.N. inspectors, something Iran has refused to grant. Since 2006, the U.N. Security Council has demanded that Iran suspend the work.

The powers said in February that they wanted Iran to convince them it was serious about a final deal by stopping enrichment of uranium to 20 percent, an important technological advance en route to producing weapons-grade material, ship out some stockpiles and shutter a facility where such work is done.

In return they offered relief on sanctions on Iranian petrochemicals and trade in gold and other precious metals. Iran says it is refining to the 20 percent threshold in order to convert the material into fuel for a medical research reactor.

No Deal in Sight on Final Day of Iran Nuclear Talks