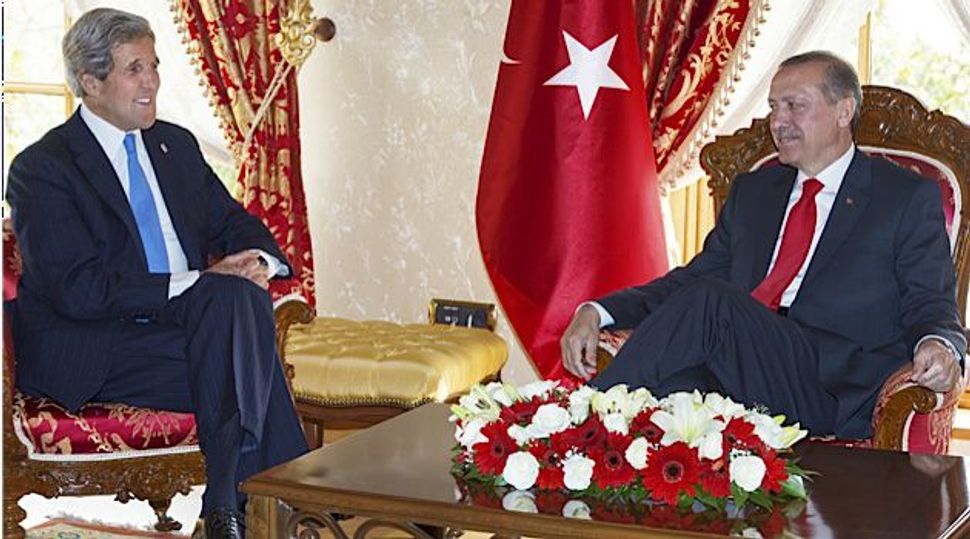 U.S. Secretary of State John Kerry urged Turkey and Israel on Sunday to restore full relations, calling this vital to regional stability, but said it was not up to Washington to dictate the conditions of rapprochement.

An Israeli-Turkish reconciliation could improve regional coordination to contain spillover from the Syrian civil war and ease Israel’s diplomatic isolation in the Middle East as it faces the challenge of Iran’s nuclear program.

Kerry said it was imperative for Israel to honour its commitment to pay compensation to the families of those who were killed by Israeli marines aboard a Turkish vessel trying to break a naval blockade on Gaza in 2010, and for both countries to return their ambassadors.

He was speaking in Istanbul some two weeks after U.S. President Barack Obama brokered a thaw between Turkey and Israel, whose relations were frozen by the killing of nine Turkish citizens in that raid on a Gaza-bound flotilla.

“With respect to the Israel-Turkey track, it is not for the United States to be setting conditions or terms,” Kerry told reporters alongside Turkish Foreign Minister Ahmet Davutoglu.

“To be back on track in its full measure it is imperative that the compensation component of the agreement be fulfilled, that the ambassadors be returned and that full relationship be embraced, but it’s not up to us to discuss the timing.”

Israel on March 22 bowed to a long-standing demand by Ankara, once its close strategic partner, to apologize formally for the deaths aboard the Turkish ship Mavi Marmara.

It was boarded by Israeli marines who had intercepted the flotilla challenging Israel’s naval blockade of the Palestinian-run Gaza Strip.

Israeli Prime Minister Benjamin Netanyahu’s office said he had agreed to conclude an agreement on compensation and that he and Turkish Prime Minister Tayyip Erdogan agreed to normalize ties, including re-installing their respective ambassadors.

An Israeli delegation is expected to arrive in Turkey this week to begin discussing the details of the compensation agreement. Neither country has said, however, when their ambassadors would go back.

Despite Obama’s having pulled off a diplomatic coup – a three-way telephone call with the Israeli and Turkish prime ministers, who had not spoken since 2011, some officials in Washington are worried Turkey might be backtracking on the deal.

Hours after the Israeli apology, large billboard posters sanctioned by Turkey’s ruling party mayor, appeared in the Turkish capital showing a glum-looking Netanyahu next to a glowing picture of Erdogan, suggesting some in Ankara were taking a triumphalist tone.

But Kerry said Turkey had responded “sensitively” and “thoughtfully” to the apology. “They have taken steps to try to prevent any sense of triumphalism. It has not come from the government. In fact, there has been limited response by the government itself and I think it’s important for everybody to take note of that,” Kerry said.

Both Kerry and Davutoglu said they had discussed the two-year-old civil war in Syria, including the shared goal for a peaceful transition there. They said a meeting of a core group of the Friends of Syria would take place soon.

One of the underlying motivations for the Israeli-Turkish rapprochement, at least on the Israeli side, has been a desire to secure allies in the region as Syria’s conflict next door churns into its third year.

A senior U.S. official told reporters with Kerry that during the visit to Istanbul the secretary of state would also reiterate “the importance of keeping the borders open to Syrians fleeing from violence”.

The official said this was a reference to reports, which Turkey denied on March 28, that it had rounded up and deported hundreds of Syrian refugees following unrest at a border camp.

Witnesses said hundreds of Syrians were bussed to the border after clashes in which refugees in the Suleymansah camp, near the Turkish town of Akcakale, threw rocks at military police, who fired teargas and water cannon.

Turkey’s foreign ministry said 130 people, identified as being “involved in the provocations,” crossed back into Syria voluntarily, either because they did not want to face judicial proceedings or because of repercussions from other refugees.

The incident highlighted the strain that the exodus from Syria’s war is placing on neighbouring states.

Since the outset of the Syrian conflagration, more than 1.2 million Syrians fleeing violence and persecution have registered as refugees or have awaited processing in neighboring countries and North Africa, according to U.N. figures.