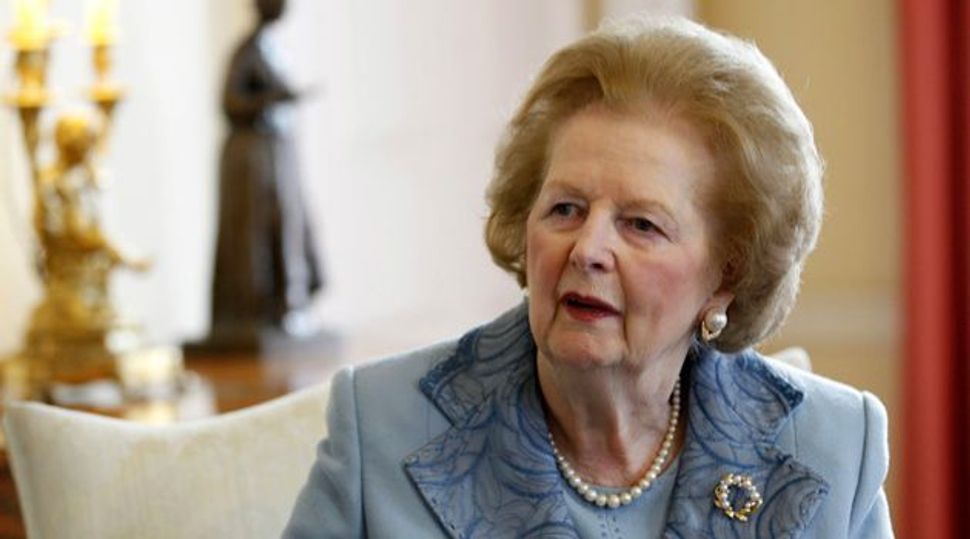 Margaret Thatcher, the “Iron Lady” who transformed Britain and inspired conservatives around the world by radically rolling back the state during her 11 years in power, died on Monday following a stroke. She was 87.

Britain’s only woman prime minister, the unyielding, outspoken Thatcher led the Conservatives to three election victories, governing from 1979 to 1990, the longest continuous period in office by a British premier since the early 19th century.

A grocer’s daughter with a steely resolve, she was loved and loathed in equal measure as she crushed the unions, privatised vast swathes of British industry, clashed with the European Union and fought a war to recover the Falkland Islands from Argentine invaders.

She struck up a close relationship with U.S. President Ronald Reagan in the Cold War, backed the first President George Bush during the 1991 Gulf War, and declared that Soviet leader Mikhail Gorbachev was a man she could do business with.

“Her legacy will be the fact that she served her country so well, and she saved our country and she showed immense courage in doing so, and people will be learning about what she did and her achievements in decades, probably centuries to come.”

Cameron cut short a visit to Europe to return to Britain after the death was announced and British flags at Cameron’s official residence, 10 Downing Street, were lowered to half mast.

Mourners began to lay flowers outside her house in Belgravia, one of London’s most exclusive areas. One note said: “The greatest British leader.”

Thatcher died peacefully on Monday morning, said Lord Bell, a spokesman for the family. She had been in poor health for months and had declined into dementia in her final years.

“I think she will be remembered as one of the greatest prime ministers this country has ever had,” Bell said.

“I’m sure she will be remembered in the context of other great men like Winston Churchill. She made a real difference to the way we live our lives,” Bell said.

The British government said Thatcher would have a ceremonial funeral with military honours at London’s St Paul’s Cathedral, which falls short of a full state funeral, in accordance with the wishes of her family.

‘THE LADY’S NOT FOR TURNING’

The abiding images of her premiership will remain those of conflict: huge police confrontations with the miners’ union, her riding a tank in a white headscarf, and flames rising above Trafalgar Square in the riots over an unpopular local tax which ultimately led to her downfall.

“It’s very sad to hear of her death but her legacy and death are two different things. Politically, she did not leave a good legacy for the working class,” Kevin Robertson, a 39-year-old garage manager, told Reuters in Edinburgh.

To those who opposed her she was blunt to a degree. “The lady’s not for turning”, she once famously informed members of her own Conservative Party who were urging her to moderate her policies.

Others who crossed her path, particularly in Europe, were subjected to withering diatribes often referred to as “handbaggings”, named after the black leather bag she invariably carried.

Queen Elizabeth said she was sad to hear the news of Thatcher’s death and sent a message of sympathy to her family.

“Her memory will live long after the world has forgotten the grey suits of today’s politics,” said London Mayor Boris Johnson.