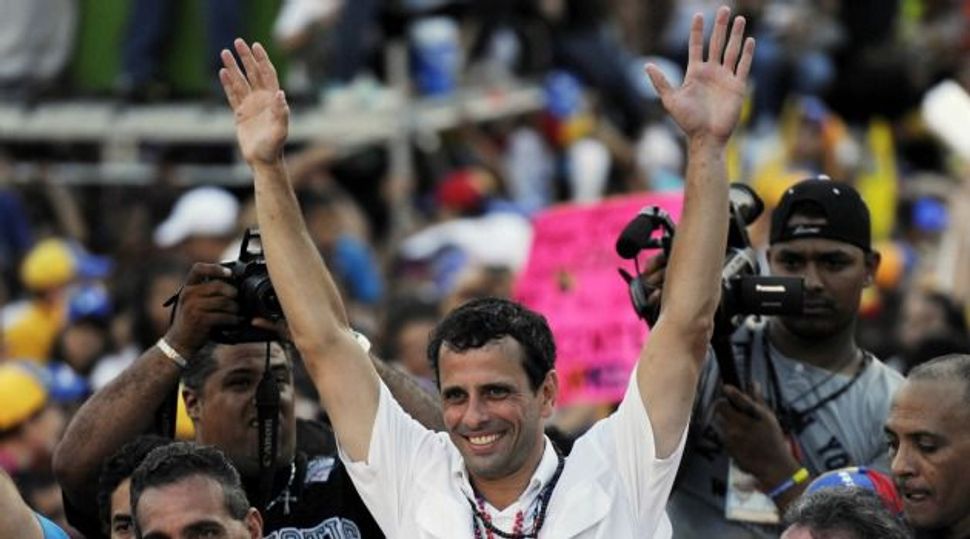 Running Behind: Henrique Capriles is running hard in the race to succeed the late Venezuelan strongman Hugo Chavez. He still has some ground to make up. Image by getty images

After beating Venezuelan opposition leader Henrique Capriles in last year’s presidential election, Hugo Chavez telephoned him and courteously quipped: “You made me get out and work hard!”

Now in his second campaign for the OPEC nation’s top job, the tireless Capriles has again pushed himself to the limit to ensure his new rival and election favorite, Chavez’s protege Nicolas Maduro, does not have an easy path to victory.

“I’m shedding my skin for Venezuela,” Capriles, 40, roared this week at the final rallies of a passionate campaign where he has re-energized opposition backers still upset about his loss against the socialist Chavez last October.

“My body and bones may be hurting, but my heart is bursting with emotion – this isn’t euphoria, it’s hysteria for change!” he said at a rally in eastern Venezuela during an almost manic criss-crossing of the country in search of votes.

After beating Capriles in October for his fourth presidential election victory, the cancer-stricken Chavez’s health deteriorated quickly and he died on March 5.

He had named Maduro as his chosen heir before undergoing his last cancer operation in December, and a surge of emotion over his death has given Maduro a huge boost ahead of the election on Sunday.

Lambasting him daily as a “liar,” “incompetent” and member of a “corrupt” elite, Capriles has mocked the acting president for calling an ancient curse on the heads of opposition voters and claiming Chavez had appeared to him in the form of a bird.

From wearing the red colors of the ruling Socialist Party or logo of the state oil company, to saying his little finger had more revolutionary fiber than Maduro’s whole body, Capriles’ new aggression has delighted supporters.

Yet all local polls still show him behind, albeit with a gap shrinking to below 10 points in some weekly surveys.

Overturning the popular Chavez’s dying wish, the naming of Maduro as his successor in his last public speech, may be a step too far.

Capriles won 44 percent of the vote in October, the opposition’s best showing against Chavez in a presidential election, and he is predicting a late surge this week.

“The polls are only a snapshot of a few weeks ago, and things are moving fast. We are winning,” Capriles said. “They know this election will be decided on April 14th, the game’s not over.”

His camp, cheekily called the “Simon Bolivar Command” in a reclaiming of Chavez’s idol and Venezuela’s independence hero Simon Bolivar, is far more upbeat than just two weeks ago.

Capriles and his aides believe Maduro’s poll numbers are moving lower as the sympathy over Chavez’s death wears off.

But their rising self-belief is not yet widely shared.

“The opposition’s optimism is probably misplaced,” the LatinNews think-tank said in what is a near-consensus view of non-partisan observers tracking the race.

“Despite Maduro’s obvious lack of charisma in comparison to Chavez, he is the only option on the table for ‘Chavistas’ and with the state oil company PDVSA fueling a well-orchestrated campaign, Sunday’s ballot should be a mere formality.”

To pull off a surprise win, Capriles first needs to ensure as many as possible of his 6.6 million supporters in October back him again. Last year’s record overall 80 percent turnout is unlikely, however, to be replicated.

He would also need a significant number of “Chavistas” to decide that Maduro, a former bus driver who rose to be vice president and is vowing to continue his mentor’s hardline socialism in Venezuela, is not up to the job.

That is extremely hard just a month after Chavez’s death, with his endorsement of Maduro literally ringing in Venezuelans’ ears from speakers at every government rally and campaign spot.

“Give us another month or two, for people to start comparing Henrique with Maduro as candidates head-to-head, instead of Henrique having to go up against the ghost of Chavez, and we would win this easily,” said Nelly Rodriguez, resting with friends at a Caracas cafe after attending a Capriles rally.

“It’s pretty obvious that Maduro is a terrible candidate. If it weren’t for the Chavez factor, there’d be no contest here.”

If Capriles loses again on Sunday, the opposition coalition faces another six years in the political wilderness and the hard-won unity of the last few years could splinter.

The Democratic Unity movement’s diverse mix of right- and left-wing groups was already under huge strain earlier this year before Capriles galvanized them and buried disagreements, at least temporarily, for the sake of a united push on Sunday.

Capriles is clearly the best and most popular opposition leader in years, but another defeat would put him in a difficult position. There are others waiting in the wings to polish potential rival candidacies for the future.

“Chavismo” itself may not stay intact without its mesmerizing leader, meaning Venezuela’s split down the middle between pro- and anti-Chavez factions might become blurred with a realignment of political forces.

Anticipating a probable loss, some in the opposition are consoling themselves that Capriles would not inherit what they see as the complicated mess that Venezuela’s economy and society present to the winner of Sunday’s election.

If he wins, Capriles would not only face enormous problems, from terrifying crime levels to Byzantine currency controls and the highest inflation in the Americas, but also a “Chavista”-dominated legislature and a potentially antagonistic judiciary.

“Henrique would face an impossible, Herculean task. So let’s watch Maduro burn himself within six months instead,” said Amelia Alvarez, 46, among the group of Capriles backers downing iced tea at the cafe after hours chanting his name at a rally.