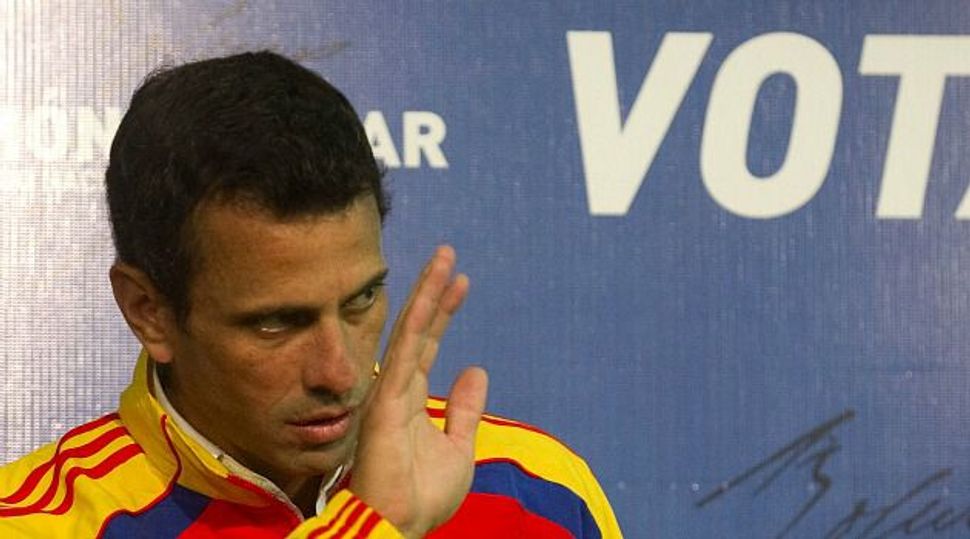 Venezuelans decide on Sunday whether to honor Hugo Chavez’s dying wish for a longtime loyalist to continue his hardline socialism or hand power to a young challenger vowing business-friendly changes.

Acting President Nicolas Maduro had a double-digit lead in most polls, largely thanks to his former boss’s public blessing before he died from cancer last month. But the gap has narrowed in the final days, with one survey putting it at 7 percentage points.

His opposition rival, Miranda state Governor Henrique Capriles, who has Jewish roots, says Venezuelans are tired of divisive “Chavista” politics and that his support has surged enough for him to pull off a surprise win.

Maduro, a 50-year-old former bus driver who has trumpeted his working-class roots at every rally, is promising to push forward Chavez’s “21st century socialism” if he triumphs.

“We’re going to have a giant victory. The bigger the margin, the more peaceful the country will be,” the brawny, mustachioed Maduro said. “If the gap is smaller, it is only because they (the opposition) managed to confuse a group of Venezuelans.”

The winner will inherit control of the world’s biggest oil reserves in an OPEC nation whose stark political polarization is one of Chavez’s many legacies.

Also at stake is the generous economic aid Chavez provided to left-leaning Latin American governments from Cuba to Bolivia.

From the country’s Caribbean coastline to its cities and jungle interior, polling centers were due to open from 6 a.m. (0630 EST) until 6 p.m. (1830 EST), though voting could run longer if there are still lines.

Both camps have urged supporters to vote early and be on alert for fraud. Given the deep mutual mistrust, a close or contested result could raise the chance of unrest.

Chavez’s fourth presidential election win in October saw record turnout of 80 percent. This time, though, both sides worry that participation could be lower because of election fatigue.

Many Venezuelans could be forgiven for feeling like they are stuck in a never-ending campaign. Opposition primaries early last year were followed by the ailing president’s dramatic re-election, and then a vote to choose state governors in December.

Maduro has cloaked himself in the imagery of Chavez and calls himself the late president’s “son.” At events around the nation, supporters chanted “With Chavez and Maduro, the people are safe!” and “Chavez, I swear to you, I’ll vote for Maduro!”

At every rally, Maduro played a video of Chavez naming him as successor in December – “my firm opinion, clear like the full moon, irreversible” – in his final speech to Venezuelans.

If Maduro wins, he will immediately face big challenges as he tries to stamp his authority on a disparate ruling coalition while lacking his predecessor’s charisma, or the healthy state finances that Chavez enjoyed in last year’s race.

It is hard to forecast how he might do things his own way. Like many senior officials, Maduro was passionately loyal to Chavez and never expressed a different opinion in public.

Supporters say he could use his background as a union negotiator-turned-diplomat to build bridges, perhaps even with the United States after tensions during Chavez’s 14-year rule.

But there has been little sign of his softer side on the campaign trail. Maduro’s rhetoric has veered from outraged – alleging opposition plots to kill him using mercenaries – to light-hearted, such as poking fun at his often-cited tale of how he was visited by Chavez’s spirit in the form of a bird.

More often he has sounded indignant, accusing the “far-right” of plotting a rerun of a short-lived coup against Chavez a decade ago if the opposition loses Sunday’s vote.

For many “Chavistas,” their late leader’s explicit instructions will likely be enough to dispel any doubts they might have about Maduro’s abilities, at least in the short-term.

Capriles, 40, will have an even tougher time if he pulls off an upset. One of the biggest challenges will be to win over suspicious supporters of Chavez and Maduro. Both said over and over that the opposition candidate was nothing more than a pampered “bourgeois” rich kid, a traitor, and worse.

Capriles, who lost to Chavez in October’s election, has denounced Maduro and his “coterie” as fake socialists who have enriched themselves while paying only lip service to Chavez’s deeply held ideology.

“We’re going to decide the future we want – one where public projects are completed and hospitals function, or one where we stay as we are,” he roared at one of his last rallies.

Capriles is offering a Brazil-style model that mixes pro-business policies with heavy state spending on the poor. He says Maduro’s tenure has been a disaster for all Venezuelans, with a devaluation and new currency controls.

If he wins, Capriles says he will stop “gifting” Venezuela’s oil wealth to other nations like Cuba, and will cool ties with distant Chavez-era allies such as Syria, Belarus and Iran.

While he does come from a wealthy family, he has sought to establish his street credibility, riding a motorcycle, playing pick-up basketball games on shantytown courts, and almost always wearing a baseball cap.

He faces an almighty battle, however, to beat the memory of Venezuela’s late leader.

“This election is not Capriles versus Maduro,” said housewife Rosa Elena Marcano, 60, at the opposition’s last rally in western Lara state. “It’s Capriles against Chavez’s ghost.”