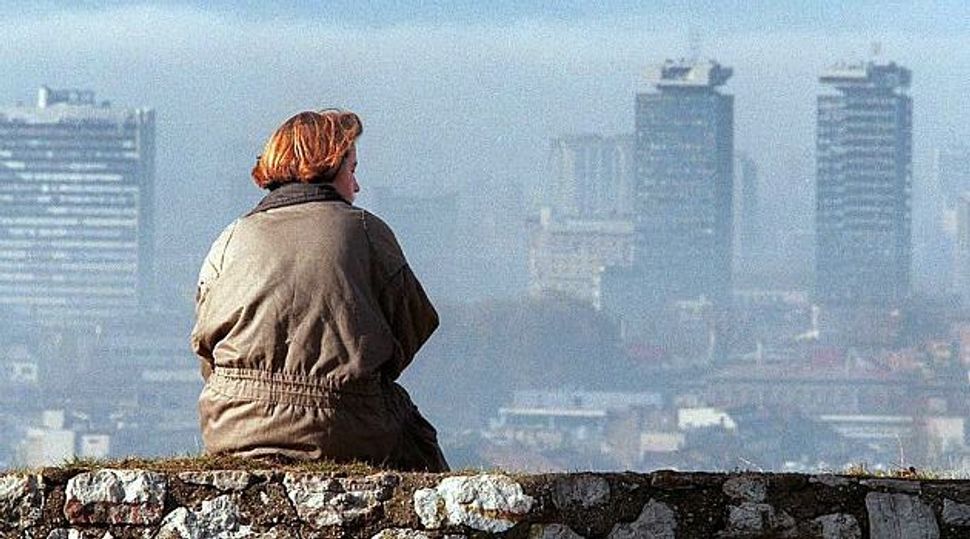 Bitter Days: Woman gazes over Sarajevo during brutal siege of the Bosnian city. In a sign of recovery, lions have been returned to the city?s zoo, where they once starved during the war. Image by getty images

Like the bears and other big cats, they starved to death after the zookeepers who risked their lives to feed them were killed or wounded in the bombardment by Bosnian Serb forces in the first months of the 1992-95 war.

Two decades on, the king of the jungle is back in the Bosnian capital.

A donation from Bulgaria, two lions arrived this month at the zoo’s new “wild garden”, a 225,000-euro ($293,000) enclosure built after four years of lobbying and fundraising by zoo workers and officials.

The lioness of the pair died shortly after arrival of unknown causes. An autopsy is pending.

But Esad Tajic, the zoo’s general manager, said he expected the remaining big cat, a 3-year-old African lion, to help double the number of visitors to about 1 million a year.

“The king of the jungle remains here. The queen unfortunately died, but we’ll make every effort to get a new lioness as soon as possible and start our own reproduction cycle next year,” he told Reuters.

The lion’s arrival has been big news in Sarajevo, where the zoo, nestled near apartment buildings half a mile from the city centre, was once trapped on the frontline of a siege that raged for 43 months, killing more than 11,000 people.

The animals slowly succumbed to hunger, their carcasses left to rot. Some 100,000 people would eventually die in the Bosnian war, the worst of the conflicts that erupted with the collapse of federal Yugoslavia.

The zoo reopened two years after the end of the war, cleared of landmines and unexploded mortar shells. Some surrounding buildings still bear the scars of the war.

The gift by the Sofia zoo has been welcomed as a rare sign of normality in a country still grappling with ethnic division and political crisis.

The lion is as yet nameless. The zoo plans to invite suggestions from the public once a new lioness arrives, but officials have yet to find the donors to pay for a trip to check prospective mates.

“Until now, our children could only see lions in the films, in cartoons,” said Kenan Memisevic, a Sarajevo resident visiting the zoo with his son after school.

“This is a big news for them,” he said, as the lion prowled behind a wall of stone and glass.

Visitor Irfana Trampa added: “The presence of such a beautiful animal in our beautiful city is a ray of hope for us, the citizens of Sarajevo.”