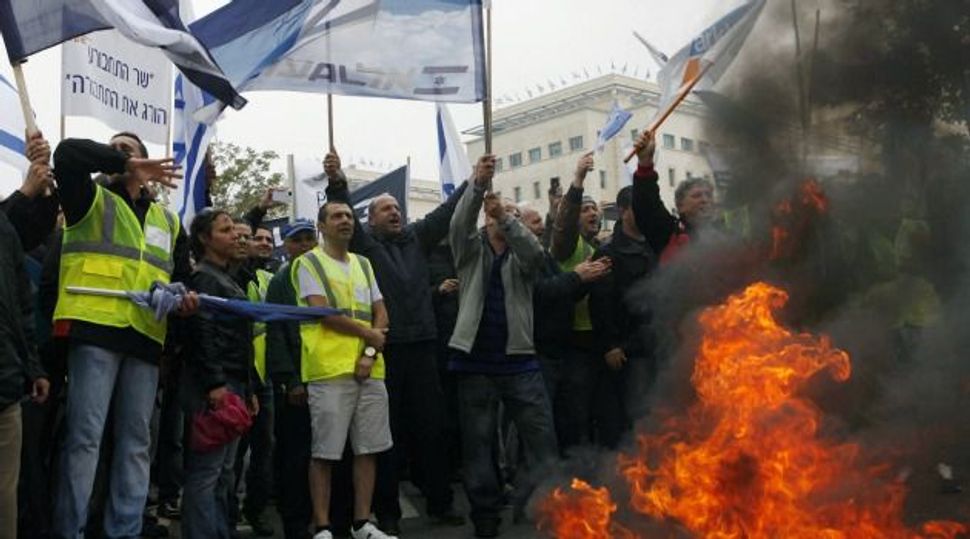 Israel’s cabinet on Sunday approved an open skies agreement that aims to boost airline traffic to and from Europe, defying a strike by workers at El Al and two smaller airlines who fear for their jobs due to higher competition from foreign airlines.

Supporters of the open skies deal – which will go into effect next April – say its relaxation of restrictions and quotas on flights between Israel and European Union countries will increase competition and help Israel’s economy.

“The reform …aims to lower airfares to and from Israel and boost incoming tourism,” Prime Minister Benjamin Netanyahu said as the cabinet approved the deal by a 16-3 vote.

To help airlines El Al, Arkia and Israir prepare for the rise in competition, the agreement will be gradually phased in over the next five years.

“The open skies agreement is the only way for El Al to economise at long last and to change its approach so that it can compete in the tough world market,” Transport Minister Yisrael Katz told Israel Radio.

A major complaint of Israel’s airlines is high security costs compared to foreign competitors but the government said it would cover 80 percent of this.

“The way in which (this deal) is being implemented will on the one hand bring a reduction in airfares but it will also cause Israeli companies to collapse,” he told Israel Radio.

Eini had called on the cabinet to delay its vote by a month to allow further discussion on adapting the plan.

Workers at El Al, Arkia and Israir started an open-ended strike at 5 a.m. (0200 GMT) but the airlines brought forward most departures so that outgoing passengers could leave Israel. Incoming flights and foreign airlines were not affected.

El Al said it had initially cancelled all departures from Tel Aviv planned until 9 p.m. (1800 GMT) but called on passengers to keep updated on the status of later flights.

According to the Israel Airports Authority, 53 departures carrying 8,700 passengers were scheduled for Sunday.

“We support competition and we support open skies, but in this form it brings about the destruction of the Israeli airline companies,” said Asher Edri, chairman of El Al’s workers’ union.

Shares in El Al, which lost $26.5 million in the fourth quarter, were down 9.5 percent at 0.55 shekels in afternoon trading in Tel Aviv.

Low-cost airline easyJet, which flies to Tel Aviv from London, Manchester and Geneva, welcomed the cabinet’s decision to approve the open skies agreement.

“easyJet … has announced several times its desire to expand its service to Israel from additional destinations in Europe once the open skies agreement was signed,” it said.

Finance Minister Yair Lapid said the deal was good for Israel and rejected the notion that jobs would be lost.

“It will not harm the number of jobs in the economy but do the opposite,” Lapid said, citing a private study that found open skies would create 10,000 new jobs.

Katz, a member of Netanyahu’s right-wing Likud party, has said the deal contained risks as well as benefits and Israel’s carriers should “exploit the opportunity to compete more vigorously with European airlines”.

Israel and the United States signed an open skies agreement in 2010.