Chuck Hagel Calls $10B Arms Deal a Warning To Iran 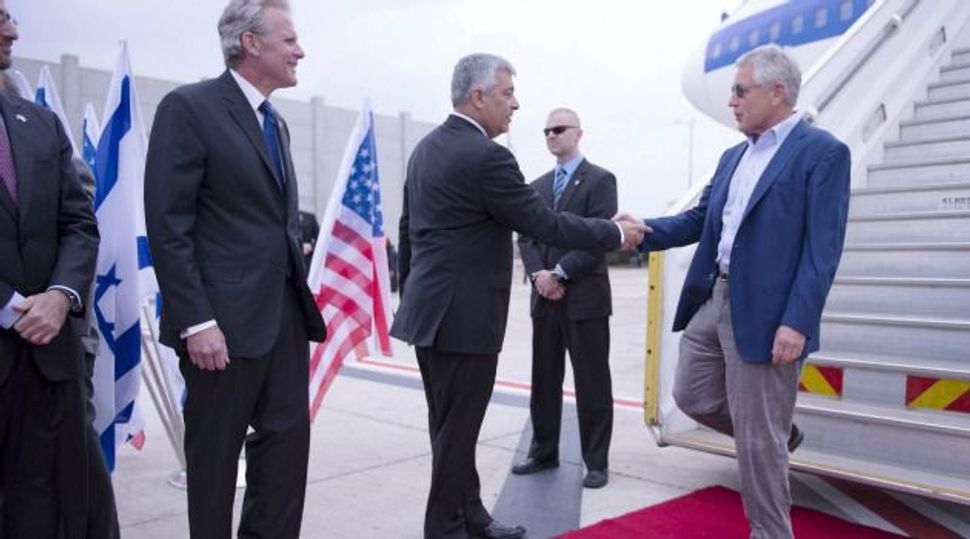 Defense Secretary Chuck Hagel said on Sunday a $10 billion arms deal under discussion with Washington’s Arab and Israeli allies sent a “very clear signal” to Tehran the military option remains on the table over its nuclear programme.

“The bottom line is that Iran is a threat, a real threat,” said Hagel, who arrived in Israel on Sunday on his first visit to Israel as defense secretary.

“The Iranians must be prevented from developing that capacity to build a nuclear weapon and deliver it,” he told reporters on his plane.

The first stop on Hagel’s week-long Middle East trip came two days after the Pentagon said it was finalising a weapons deal to strengthen the militaries of Israel and two of Iran’s key rivals – Saudi Arabia and the United Arab Emirates.

The deal includes the sale of KC-135 aerial refuelling tankers, anti-air defence missiles and tilt-rotor V-22 Osprey troop transport planes to Israel as well as the sale of 25 F-16 Fighting Falcon jets to the UAE.

The UAE and Saudi Arabia also would be allowed to purchase weapons with so-called “stand-off” capabilities that enable them to engage the enemy with precision at a distance. Defence officials said the “stand-off” arms would give the two countries more sophisticated systems than they currently have.

Asked if the arms deal sent a message that the military option was on the table if Tehran moved to build a nuclear weapon, Hagel said: “I don’t think there’s any question that that’s another very clear signal to Iran.”

But he added the military option had been “very clear to Iran for some time” and said the arms deal was a continuation of the U.S. policy to maintain Israel’s so-called “qualitative military edge” in the region, a general reference to the supply of advanced U.S.-made weaponry and technology to the Jewish state.

Iran denies Western allegations that it is seeking to develop the capability to build nuclear weapons, saying its atomic activities are aimed at generating electricity.

Israel has repeatedly voiced its impatience with the pace of diplomatic efforts to curb Iran’s enrichment of uranium, saying they should be coupled with a credible military threat. Both Israel and the United States have said all options remain on the table when it comes to dealing with any nuclear threat.

Such talk has raised international concern of a possible unilateral Israeli strike on Iran that could lead to wider Middle Eastern war.

Hagel, who faced resistance during his Senate confirmation hearing earlier this year from lawmakers who questioned his support for Israel, said part of the purpose of his visit was to underscore to Israelis that “the United States is committed to their security”.

Asked about renewed debate in the Israeli media that Israel might have to strike Iran by itself, Hagel said “every sovereign nation has the right to defend itself and protect itself”.

“Iran presents a threat in its nuclear programme and Israel will make the decisions that Israel must make to protect itself and defend itself,” he said.

But Hagel added the United States and other countries believe there is still time for diplomacy and tough international sanctions to have an impact.

After Israel, Hagel will visit Egypt, Jordan, Saudi Arabia and the United Arab Emirates. His trip comes amid mounting concerns about regional stability due to Iran’s nuclear programme, the rocky transition to civilian rule in Egypt and the civil war in Syria.

Hagel said the United States was still assessing claims that the Syrian government may have used chemical weapons against its military opponents in recent months, a red line President Barack Obama has cautioned would be a “game changer” in how the United States addresses the conflict.

So far the United States has provided non-lethal aid but has declined to arm the Syrian rebels.

“Our intelligence community is still assessing the facts and what we need to know before we can determine whether chemical weapons were used by the Syrian government,” Hagel said.

Chuck Hagel Calls $10B Arms Deal a Warning To Iran