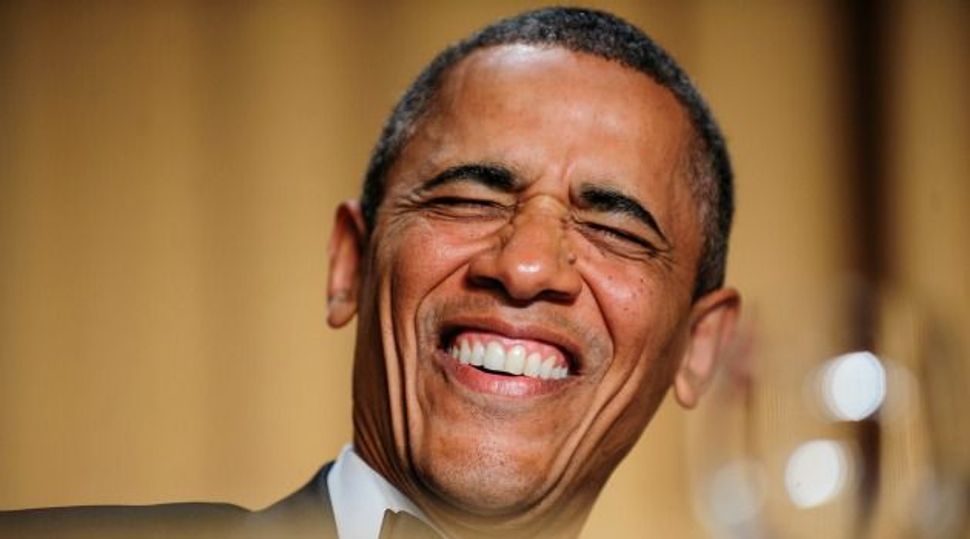 President Barack Obama poked fun at the media, his critics and himself on Saturday at the annual White House Correspondents’ Association dinner, a star-filled event where journalists and celebrities mixed with the Washington elite.

He capped the speech by playing a taped piece with Hollywood director Steven Spielberg who did a spoof claiming his new project would be a biopic called “Obama” starring Daniel Day-Lewis.

Obama then appeared acting as if he were Day-Lewis preparing for the role, mirroring the actor’s spot in “Lincoln.”

Joined at the dinner by his wife, first lady Michelle Obama, the president gently knocked Republicans for not working with him on policy priorities and made a rare reference to his race when urging the opposition party to be cooperative.

“I know Republicans are still sorting out what happened in 2012, but one thing they all agree on is they need to do a better job reaching out to minorities,” Obama said.

“And look, call me self-centered, but I can think of one minority they could start with. Hello? Think of me as a trial run, you know?” he said.

Obama, a Democrat and the first black U.S. president, won re-election in November with overwhelming support from minority voters including blacks and Hispanics.

He took a swipe at people who have doubted his religion and accused him of being a radical leftist, while he made light of his graying hair.

“These days, I look in the mirror and I have to admit, I’m not the strapping young Muslim socialist that I used to be,” Obama said. “Time passes. You get a little gray.”

The president is a Christian who was born in Hawaii, but he included some material for so-called “birthers” who falsely assert he was born abroad.

“I’m also hard at work on plans for the Obama Library, and some have suggested that we put it in my birthplace, but I’d rather keep it in the United States,” he said.

Obama made light of his own rapid rise to power by comparing himself to Republican Senator Marco Rubio, a Hispanic from Florida who is touted as a potential presidential candidate in 2016.

“One senator who has reached across the aisle recently is Marco Rubio, but I don’t know about 2016. I mean, the guy has not even finished a single term in the Senate and he thinks he’s ready to be president,” Obama joked. “Kids these days.”

Obama began running for president during his first term as a U.S. senator from Illinois.

In a room filled with journalists, the president saved some of his most biting jokes for the press.

“I know CNN has taken some knocks lately, but the fact is I admire their commitment to cover all sides of a story, just in case one of them happens to be accurate,” he said, drawing applause.

“Some of my former advisors have switched over to the dark side. For example, David Axelrod now works for MSNBC, which is a nice change of pace since MSNBC used to work for David Axelrod.”

Axelrod was the chief strategist for Obama’s re-election campaign and a former White House adviser. MSNBC is considered to be a liberal-leaning television network.

Obama also made light of his wife’s new bangs, drawing laughter from her when he showed mock pictures of himself with the same hairdo.