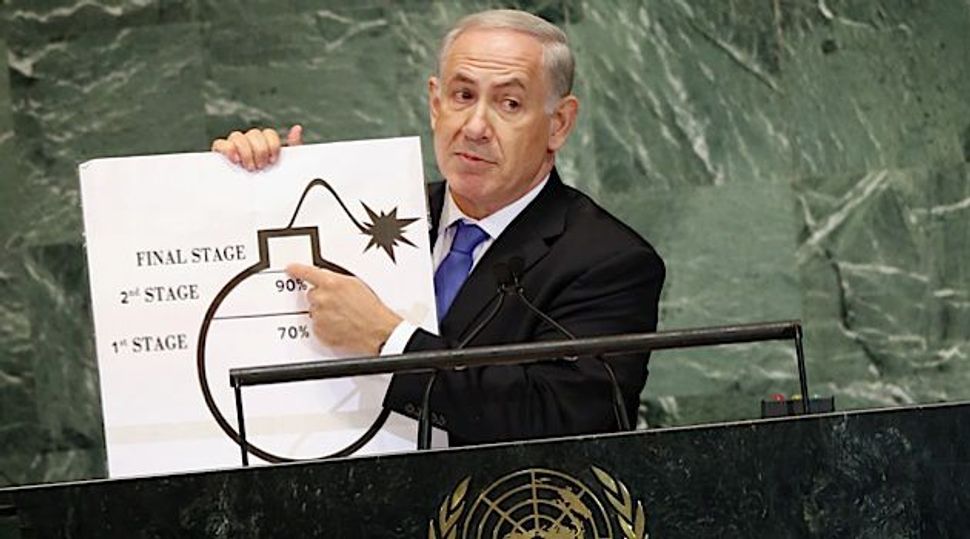 Prime Minister Benjamin Netanyahu said on Monday Iran had not crossed the “red line” he set for its nuclear programme, despite an assessment to the contrary by a former Israeli intelligence chief.

At the United Nations in September, Netanyahu drew a red line across a cartoon bomb to illustrate the point at which he said Iran will have amassed enough uranium at 20 percent fissile purity to fuel one nuclear bomb if enriched further. He said then that Iran could reach that threshold by mid-2013.

Last week, Amos Yadlin, a former chief of Israeli military intelligence, told a security conference in Tel Aviv that “the Iranians have crossed the red line” Netanyahu drew at the U.N. General Assembly.

Without referring directly to Yadlin, Netanyahu said at a meeting on Monday of his Likud-Beitenu parliamentary faction that Iran’s nuclear activities remained short of his benchmark.

“Iran is continuing with its nuclear programme. It has yet to cross the red line I presented at the United Nations, but it is approaching it systematically,” he said in broadcast remarks.

“It must not be allowed to cross it.”

The Islamic Republic says it is enriching uranium only for peaceful energy and medical purposes.

Israel, widely believed to be the Middle East’s only nuclear-armed power, has issued veiled warnings for years that it might attack Iran if international sanctions and big power diplomacy fail to curb what it regards as a drive by Tehran to develop atomic weapons.

Israel has long insisted on the need for a convincing military threat and setting clear lines beyond which Iran’s nuclear activity should not advance. It says this is the only way to persuade Iran to bow to international pressure by curbing enrichment activity and allowing unfettered U.N. inspections.