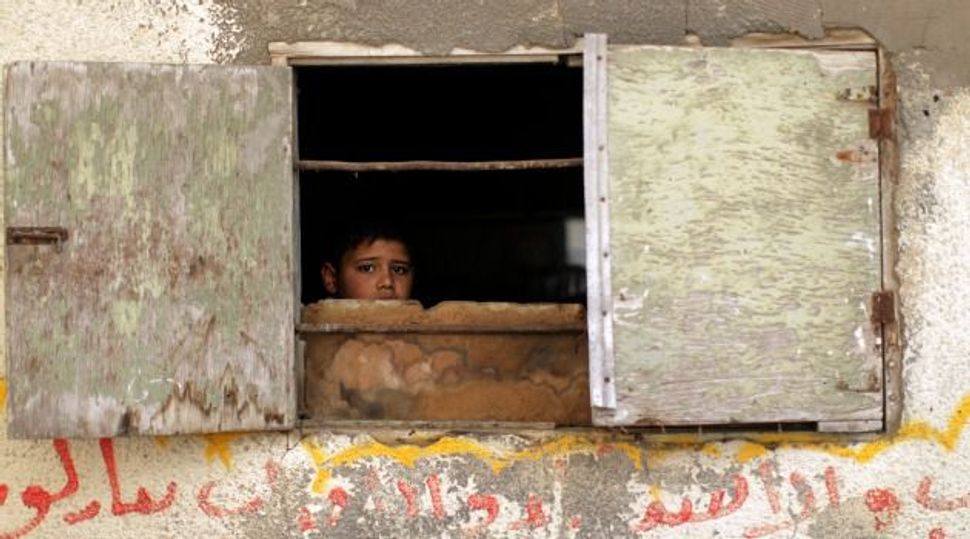 Harsh View: Palestinian boy peers out at funeral for Gaza militant killed by an Israeli strike. Image by getty images

Israel on Tuesday launched its first targeted attack on a militant in Gaza since a war in November, killing a Palestinian jihadist in an air strike that put further strain on a five-month-old ceasefire.

There was also bloodshed in the Israeli-occupied West Bank, where for the first time since 2011, a Palestinian killed a Jewish settler. Israeli soldiers shot and wounded the attacker after he stabbed the man at a busy intersection.

Both incidents held the potential of wider confrontation – along the Gaza frontier, where factions linked to al Qaeda have been carrying out intermittent rocket attacks, and in the West Bank, where clashes between stone-throwing Palestinians and the Israeli military intensified in recent months.

Israel said the Palestinian killed in the air strike, Haitham Al-Mes-hal, 29, was a jihadi who was an expert in making rockets. It accused him of involvement in a rocket attack from Egypt’s Sinai peninsula against Israel’s Red Sea resort of Eilat on April 17, which had caused no injuries or damage.

“I had said we would not sit by quietly and let this pass … we will not accept a drizzle of fire from Gaza or from Sinai,” Prime Minister Benjamin Netanyahu said after the strike.

Islamist militants in Gaza have fired sporadically at Israel in the past weeks despite an Egyptian-brokered truce that ended an eight-day conflict in November in which rockets hit Israeli cities and Israeli warplanes struck Palestinian territory.

Hamas, an Islamist group close to the Muslim Brotherhood now ruling neighbouring Egypt, has cracked down on hardline Salafi rivals it sees as jeopardising its control of the Gaza Strip.

Egypt, which signed a peace treaty with Israel in 1979, has also battled militants in Sinai, where lawlessness has mounted since President Hosni Mubarak’s downfall in 2011.

In Gaza, Mes-hal’s body was wrapped in a black flag of the Salafi factions after the air strike, near a Hamas training camp. “The Sword of Islam” Salafi group, threatened to avenge his death, saying “the response will come very soon”.

An Islamist website that carries statements from al Qaeda-related groups, described Mes-hal as a leader of Magles Shoura Al-Mujahideen, which claimed responsibility for the Eilat hit.

Hamas appeared to take softer tone. A spokesman for the movement, Fawzi Barhoum, said the Israeli attack was “unjustified and a dangerous escalation”, but he urged Egypt to press Israel “to abide by calm and stop the aggression”.

In the nearby West Bank, the killing of Eviatar Borovsky, 31, stoked anger among settlers, who complained the military had failed to respond strongly to mounting stone-throwing incidents.

Borovsky’s attacker, who a military spokesman said grabbed his weapon after stabbing him, was identified as Salam Assad Az-Zaghal of the mainstream Fatah movement. Palestinian officials said he was released two months ago from an Israeli prison after serving a 3-1/2-year term.

Ghassan Daghlas, a Palestinian official in the West Bank city of Nablus, said settlers launched “large-scale attacks” in four villages in the territory after the incident.

“They are throwing stones and attempted to set a house on fire. They also hurled rocks at a school bus and smashed its windows. The situation is going from bad to worse. A mosque was also attacked,” Daghlas said.

Nine Palestinians have been killed by Israeli forces in the West Bank since the beginning of the year, mainly in clashes that have risen sharply in recent months, raising fears that a third popular uprising, or Intifada, might be in the offing.

The Palestinians want to establish a state in the West Bank, the Gaza Strip and East Jerusalem, territories Israel captured in a 1967 war. Peace talks between the sides broke down in 2010.