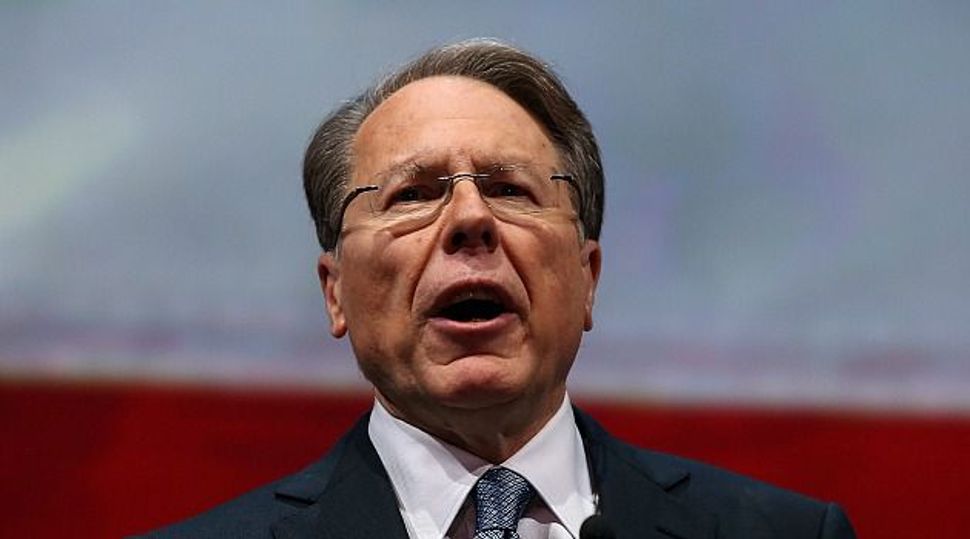 “How many Bostonians wished they had a gun two weeks ago?” LaPierre asked in a speech at the National Rifle Association’s annual convention in Houston.

“Residents were imprisoned behind the locked doors of their own home, a terrorist with bombs and guns just outside,” LaPierre said, referring to the police search in the Boston suburb of Watertown.

Reiterating a theme from earlier speakers, he said law-abiding gun owners were under attack through government moves to control gun ownership, despite the need for self-protection.

“No amount of political schemes, congressional legislation, presidential commissions or media round tables will ever change that inevitable reality.”

The convention is the first national gathering of members since last year’s high-profile shooting sprees at a theater in Aurora, Colorado, and Sandy Hook Elementary School in Newtown, Connecticut.

It also comes less than a month after the U.S. Senate voted down a measure to expand background checks for gun buyers, a step favored by U.S. President Barack Obama and most Americans.

An online Reuters/Ipsos poll released in January showed that 86 percent of those surveyed favored expanded background checks of all gun buyers.

A CBS News/New York Times poll released on Wednesday showed that 88 percent support background checks for all gun buyers and that 59 percent are disappointed or angry about the Senate vote.

Several demonstrations in support of stricter gun control took place across the street from the convention center.

LaPierre announced that the NRA had reached 5 million members, increasing by 1 million since December after the Newtown shooting.

NRA First Vice President Jim Porter told members that the background-check proposal would have made criminals out of honest gun owners.

“Selling a gun to a good neighbor, just like you would do today, becomes a felony, and the government takes your guns,” he said.

Porter, who is expected to be voted in as the NRA’s next president by board members on Monday, highlighted the role of the rank-and-file in the fierce political battle over guns.

“That family, our family encompasses tens of millions of Americans. We are the vanguard of those citizens. The gun lobby – that’s you,” he said. “With our liberties at stake, we trump the billionaires, the media and the politicians every time.”

On Friday and Saturday, a group gathered outside the center to read aloud the names of people who had died from gun violence in the United States since the Sandy Hook massacre in December.

Austin resident Heather Ross said on Saturday morning that she had been there since 7 a.m. on Friday.

“It’s really intense to read these names because a few of them on there are zero or 1 years old, and that’s hard. That’s a baby,” Ross said.

“Then when you read one that’s your age, or your sibling’s age, or you read all the names (of people who died) on your mother’s birthday – that’s very impactful and you go through it a little bit slower.”

A group called Moms Demand Action for Gun Sense in America gathered signatures and messages on large signs set to be delivered to U.S. Senators Ted Cruz and John Cornyn of Texas.

They held a photo session on Saturday with some former Harlem Globetrotters and former NBA players and broadcaster Steve “Snapper” Jones to bring attention to children who were shot and killed.

Another group, Texans for Smart Gun Regulation, organized a protest in front of the convention center Saturday afternoon.

Occupy the NRA, organized by Aaron Black, an unofficial spokesman for last year’s Occupy Wall Street protesters, held a news conference on Saturday morning to “say yes to guns and no to the NRA.”

“I’m tired of watching our democracy being hijacked by these guys,” Black said. “It’s time for people to stand in front of this issue and not just send email petitions around.”