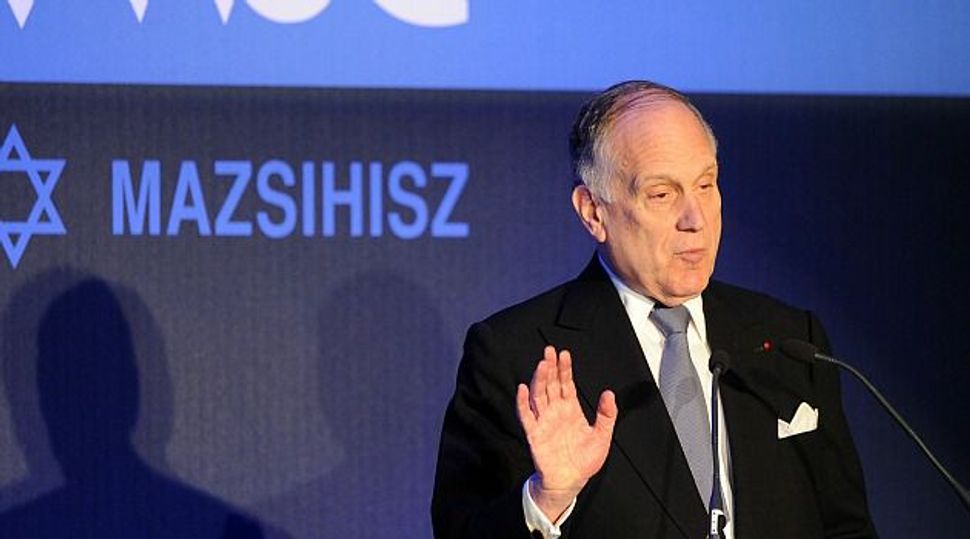 The World Jewish Congress urged Hungary on Tuesday to crack down on the far-right Jobbik party and called on governments in Europe to consider banning neo-Nazi parties threatening democracy and minority rights.

The WJC plenary assembly, held in the Hungarian capital rather than Jerusalem to highlight rising anti-Semitism in Hungary, passed a resolution saying Budapest must recognise that Jobbik poses “a fundamental threat to Hungary’s democracy.

“Decisive action by all democratic forces against these contemporary expressions of extremism must now be taken,” it said, adding a request that Prime Minister Viktor Orban sign an international declaration on combating anti-Semitism.

Jobbik, which openly vilifies Hungary’s Roma minority and has accused Jews of buying up property to take over Hungary, has been a central issue at the three-day WJC assembly, which brought together Jewish leaders from about 100 countries.

Orban addressed the opening session of the assembly on Sunday evening, issuing a strong denunciation of anti-Semitism but avoiding any mention of Jobbik.

“He missed a golden opportunity,” said WJC President Ronald Lauder, who while introducing Orban had specifically asked him to denounce the populist party.

Jobbik, which won 17 percent of the vote in the 2010 election and has 43 of the 368 seats in parliament, held an “anti-Zionist and anti-Bolshevik” rally in Budapest to protest against the WJC meeting being held in the Hungarian capital.

Orban’s Fidesz party has a two-thirds majority in parliament, but has lost ground in opinion polls since it took power in 2010. It still has a strong opinion poll lead over opposition parties however and has a good chance of winning year’s election.

Support for Jobbik meanwhile has hovered around 10 percent this year, but around half of Hungarian voters are undecided.

Robin Shepherd, author of a study for the WJC on neo-Nazi parties in Europe, told the assembly Fidesz was not anti-Semitic but it competed with Jobbik for votes among nationalists frustrated by the economy crisis and resentful of foreign influence in Hungary.

“If Orban goes too hard against Jobbik, he’s worried he won’t be able to scoop up Jobbik’s voters,” he said.

The assembly also debated the rise of far-right parties such as Golden Dawn in Greece, which came from nowhere to win about seven percent in elections there last year amid a deep economic crisis.

Shepherd said support for Golden Dawn had risen in opinion polls since the election and the Athens government was so concerned about the country’s economic crisis that it did not immediately respond to the challenge it presented.

David Saltiel, leader of the Greek Jewish community, agreed and told the assembly: “Our country was caught by surprise.”

But Saltiel said the government, after lobbying by the WJC, had assured him it would soon pass a tough hate speech law that would outlaw incitement against people because of their race, religion, ethnicity or sexual orientation, and impose up to six years in prison on offenders.

Parliamentary deputies would not be excluded, he said, and parties that receive public funding would see it suspended if their leaders publicly deny the Holocaust – which Golden Dawn leaders have done in the past.

“We think with this law, (Golden Dawn) will be brought back to the small numbers it had before,” he said.

The resolution also urged Germany and other countries with neo-Nazi parties to consider banning them.

German Chancellor Angela Merkel has decided not to seek a ban on the far-right National Democratic Party (NPD) because it is not clear whether such a ban would be constitutional.

But the Bundesrat, the upper house of parliament that represents the 16 federal states, has begun its own effort to ban the party, he said.