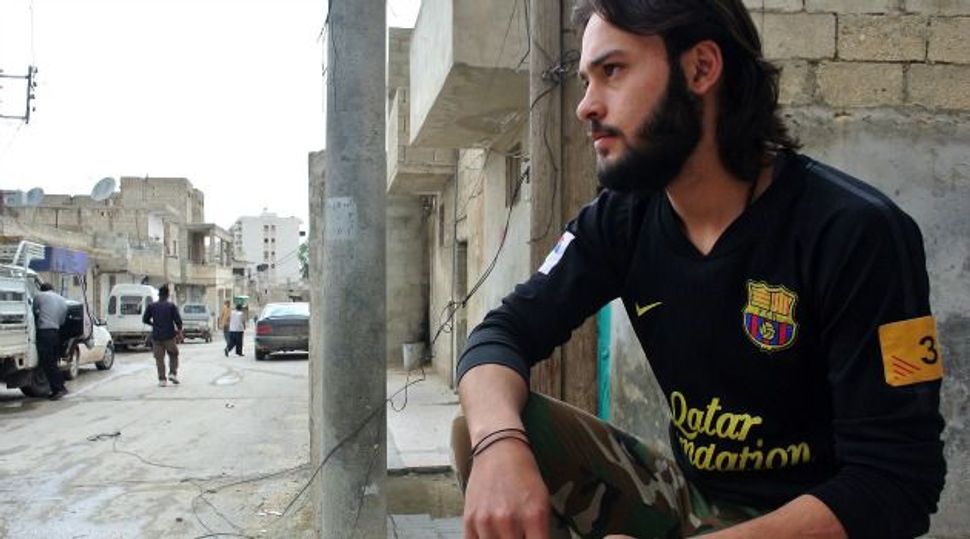 Rising Brutality: Syrian rebel stands guard in city of Alleppo. A video of a rebel commander cutting the heart out of a government soldier has raised new alarm about the brutal civil war. Image by getty images

A video of a Syrian rebel commander cutting the heart out of a soldier and biting into it is emblematic of a civil war that has rapidly descended into sectarian hatred and revenge killings, Human Rights Watch said on Monday.

The New York-based group said an amateur video posted on the Internet on Sunday shows Abu Sakkar, a founder of the rebel Farouq Brigade who is well known to journalists as an insurgent from Homs, cutting into the torso of a dead soldier.

The video has caused outrage among both supporters of President Bashar al-Assad and opposition figures.

“I swear to God we will eat your hearts and your livers, you soldiers of Bashar the dog,” the man says to offscreen cheers of his comrades shouting “Allahu akbar (God is great)”.

The Syrian conflict started with peaceful protests in March 2011, but when these were suppressed it gradually turned into an increasingly sectarian civil war which, according to one opposition monitoring group, has cost more than 80,000 lives.

Majority Sunni Muslims lead the revolt, while Assad – whose family have ruled for over four decades – gets his core support from his own Alawite sect, an offshoot of Shi’ite Islam.

Peter Bouckaert of Human Rights Watch said that he had seen an original, unedited copy of the video and that Abu Sakkar’s identity had been confirmed by rebel sources in Homs and by images of him in other videos wearing the same black jacket as in the latest clip and with the same rings on his fingers.

“The mutilation of the bodies of enemies is a war crime. But the even more serious issue is the very rapid descent into sectarian rhetoric and violence,” said Bouckaert.

He said that in the unedited version of the film, Abu Sakkar instructs his men to “slaughter the Alawites and take their hearts out to eat them”, before biting into the heart.

Abu Sakkar has been seen in previous videos firing rockets at Lebanese Shi’ite villages on the border and posing with the body of a soldier purportedly from the Lebanese Shi’ite militant Hezbollah group, which is helping Assad’s forces.

Reuters cannot independently verify videos from Syria, where access is restricted by the government and security constraints. (An edited version of the video can be found at https://www.youtube.com/watch?v=Z9IRn5b0aik)