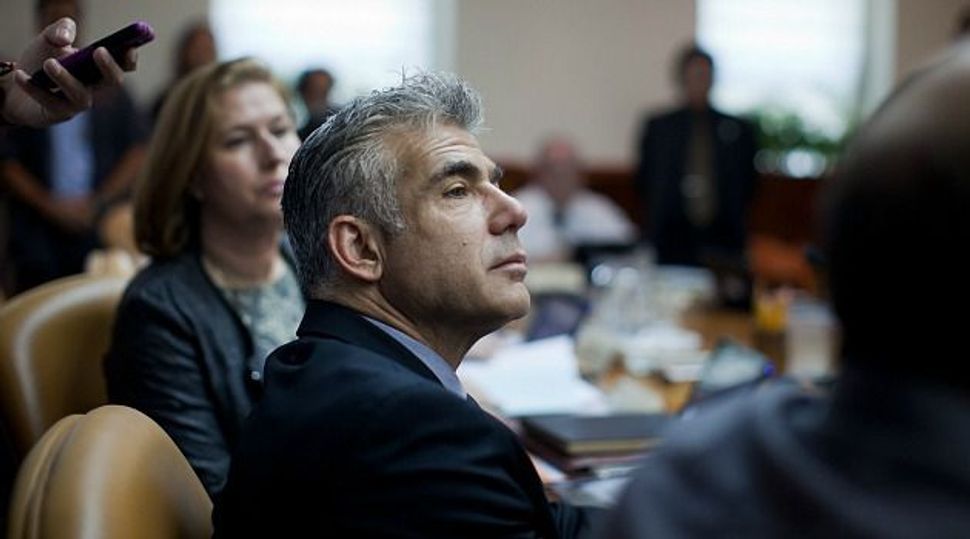 Just months after a dazzling political debut, Israel’s new finance minister Yair Lapid has come crashing down to earth with a budget that critics say hits the very people he vowed to protect – the middle classes.

The deficit-cutting package was approved by the cabinet early on Tuesday and now passes to parliament, where Lapid faces a buoyant opposition eager to damage the rookie politician whose seemingly impregnable image has suddenly shattered.

Propelled by his movie-star good looks, Lapid’s Yesh Atid (There is a Future) party came second in January’s election, winning over almost every undecided voter in the final days of the campaign to the dismay of Prime Minister Benjamin Netanyahu.

But in barely two weeks, his poll ratings have nosedived, his ever-active Facebook page has become a wall of abuse and his many enemies are already writing his political obituary.

“Yair Lapid is finished. Wiped out. Done for,” said a column in Israel’s centre-left Haaretz newspaper on Sunday.

With the new government only two months old, news of Lapid’s demise is greatly exaggerated and a swift turnaround of state accounts in 2014 could yet propel the former television host towards his coveted goal – to become prime minister.

Experts have calculated that the austerity measures will cost the average Israeli household an amount equivalent to nearly one month’s average gross salary over a year.

Economists say the much-maligned budget, which mixes tax rises with spending cuts, does however stand a good chance of achieving its goal and reducing the deficit to three percent of gross domestic product in 2014 from a projected 4.65 percent this year.

But besides hoping his maths are right, Lapid is going to have to work hard to convince his sceptical supporters that he can live up to his campaign rhetoric and tackle powerful forces in Israeli society, such as the unions and corporate giants.

“I am sad about the reaction to the budget,” said Dov Lipman, a rabbi and one of Yesh Atid’s 19 parliamentarians.

“Challenging the unions and the monopolies are goals of ours, but a decision was made that this was not the right time. The economy cannot be fixed overnight,” he told Reuters.

Many people were surprised when Lapid emerged from coalition negotiations as the finance minister. Although one of his campaign slogans had been “Where’s the Money?”, he himself had no economic background and wanted to become foreign minister.

Many analysts thought it was a cunning move by Netanyahu, his political-rival-turned-coalition-partner, to push him into the financial hot seat, knowing full well that the economy was in a much worse shape than he had let on ahead of the election.

“I wouldn’t be surprised if Netanyahu had set him up. It would be the correct move in politics,” said Reuven Hazan, head of political science at Jerusalem’s Hebrew University.

“If anyone thinks that in politics you put the right person in the right position, rather than put your biggest challenger in the worst possible position, then that person knows nothing.”

While Lapid faced a deluge of abuse last week after unveiling his first budget, a smiling Netanyahu was enjoying a succession of photo opportunities during a visit to China.

Ministers normally have six months to prepare an annual budget, but the January election meant Lapid had just six weeks to put together a package covering both 2013 and 2014.

Former Bank of Israel deputy governor, Avia Spivak, suggested it would have been wiser for Lapid to hold off on 2014 deliberations. “We needed more time to assess the situation,” said Spivak, who teaches at Ben Gurion University.

Lapid ploughed ahead regardless, and discovering a 35 billion shekel ($9.6 billion) hole in the accounts, he turned to his favourite means of communication, Facebook, to explain the predicament.

Warning of tough times ahead, he said that he had hoped to “renovate the house”, but had found instead that there was a “monstrous overdraft” to pay off because the previous owners had taken “out huge loans and had a party”.

Lapid says the pain is shared out equally, noting that he also upped corporate taxes by 1.5 percentage points and confronted one of the state’s sacred cows – the defence budget, which faces a three billion shekel cut.

To add insult to injury to his fans, Lapid also struck a swift deal with the main union. Rather than go to war with the labour bosses, as he had promised, he sought instead to head off the threat of a strike and agreed to delay measures that he had promised would bring lower prices, such as privatising ports.

Looking to revive the spirit of 2011, when hundreds of thousands of Israelis protested against the high cost of living, activists called for a revival of the street demonstrations last weekend.

“He has just screwed all of us over and made all of our lives a lot harder and a lot worse,” said Dara Libiberski, 23, a protester in Tel Aviv on Saturday.

“I can’t afford for my life to get more expensive.”

Only a few thousand turned out for the march, but more protests have been called for this coming Saturday and Lapid will be in political trouble should they start to gain traction.

Ironically, Israel’s fiscal difficulties arise in part from the concessions Netanyahu made to defuse the unprecedented 2011 street movement – such as expanding free pre-school care for toddlers and raising some public sector pay.

Indeed, alongside the belt-tightening, actual government spending will rise more than five percent year-on-year in 2014 to pay for an array of projects – well above inflation.

“People forget that for the last year or two, Netanyahu has had an open cheque book,” said Jonathan Katz, macro strategist for HSBC in Tel Aviv. He added that while Lapid had angered his voters, he had also helped restore Israel’s market credibility.

In a sign of that, the risk premium for Israeli 10-year bonds compared to U.S. Treasuries had fallen to under 160 basis points from just over 200 before the budget was announced.

Lapid’s own poll ratings have also sunk. One survey said that only 47 percent of Yesh Atid voters planned to back him in future, while 28 percent said they would not. Some 25 percent were undecided.

But Hazan, from Hebrew University, predicted that if Lapid started to stand up to the vested interests, as he promised in weekend television interviews, and if the economy turned round, then he could suddenly find himself in a strong position.

“In two years time he will start campaigning to be prime minister or else his party will be in the single digits … and will begin to unravel,” he said.