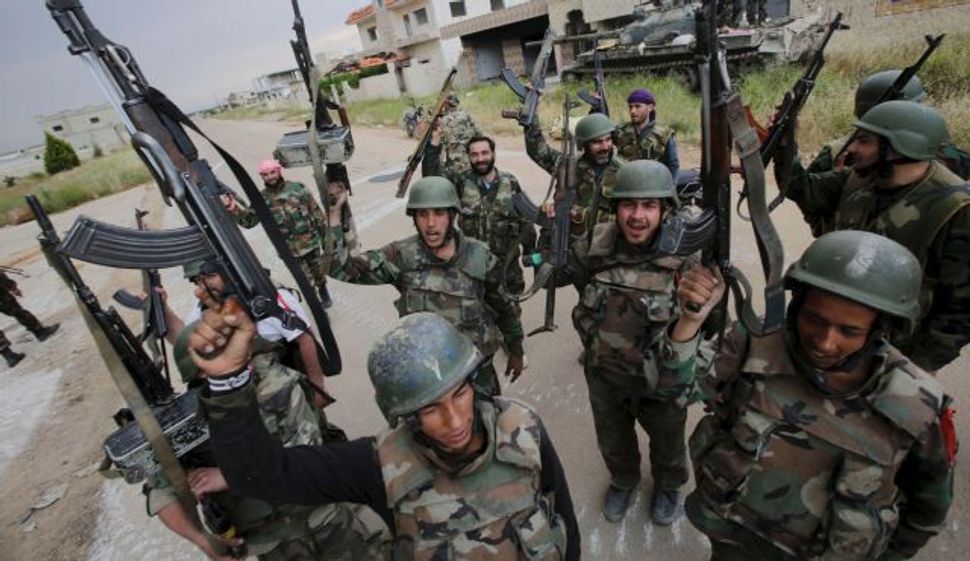 Syrian troops celebrate as they take control of the village of Haydariyah, some seven kilometers outside the rebel-held city of Qusair, May 13, 2013. Image by Haaretz/AFP

Iran on Friday denied it has forces in Syria supporting President Bashar Assad’s army, one day after foreign backers of the Syrian leader’s rebel foes demanded Tehran withdraw its fighters from the country’s territory.

“The true enemies of Syria make up these accusations to provoke the people of this country,” Foreign Ministry spokesman Abbas Araqchi said, quoted by Iranian state television.

At a meeting in Jordan on Thursday, the Friends of Syria grouping of Western and Arab governments called for the immediate withdrawal from Syria of Iranian fighters and Lebanese Hezbollah guerrillas.

They were reported to be fighting alongside the Syrian army and militias loyal to Assad in the town of Qusair, near the border with Lebanon.

“In response to a question about accusations that Iranian and Hezbollah forces were present in Syria, Abbas Araqchi said Iranian forces have never been and are not present in Syria,” the state television report said.