Despite Repression, Hamas Survives in Shadows of Palestinian-Run West Bank 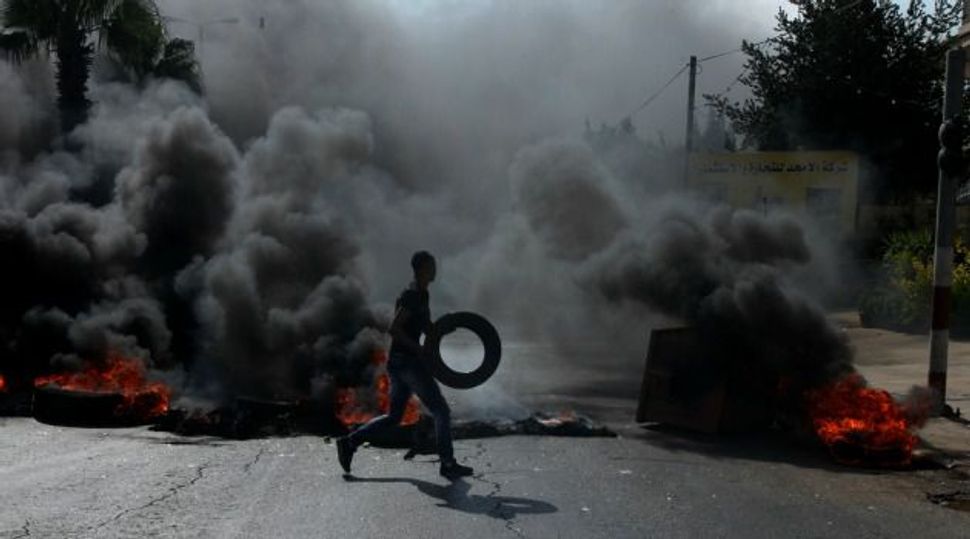 One-Faction State: Palestinians protest the high cost of living in the West Bank. The ruling Fatah faction keeps a lid on any opposition, especially from its Islamist rival Hamas. Image by getty images

In his sparse village home adorned only with framed verses from the Quran, Mohammed Ghannam opens his shirt, pointing silently to his bruised chest.

Ghannam, 44, whose job was to deliver the call to prayer in Dura’s local mosque, said plainclothes security forces from the Palestinian Authority (PA) detained him last month for belonging to the Islamist movement Hamas and beat him mute.

“They didn’t ask me any questions, just punched me hard in the face and the chest,” he wrote limply on a notepad. “They hit my head again and again against a concrete wall.”

Led by the secular Fatah party, the Western-backed PA has pursued surveillance, firings, arrests and torture to bar its Islamist militant rivals Hamas from public life in the West Bank, since the Palestinian territories were split in 2007 when Hamas seized control of the Gaza Strip coastal enclave.

Earlier this month, Fatah and Hamas pledged to bury their differences, form a unity government and find a common strategy toward Israel. But their harsh treatment of each other’s activists in the territory they each control makes such reconciliation a tough prospect.

Hamas is an Islamist organisation with ideological ties to the Muslim Brotherhood movement now in ascendancy in Egypt and other Arab states. It rejects peace with Israel and its crowded Gaza Strip territory has endured years of severe hardship under trade and travel restrictions enforced by Israel and Egypt.

Hamas has fired missiles from Gaza into Israel and fought two wars with Israel since 2008, most recently in November.

By contrast, Fatah, has been embraced by the outside world as the mainstream leadership of the Palestinian cause and accepts the principle of negotiating peace with Israel. Its West Bank territory is far more prosperous and open than Gaza under Hamas – but it is still a harsh place for its rivals.

Twenty-eight complaints of torture by the West Bank security forces were submitted in April to the PA’s official rights watchdog, the Independent Commission for Human Rights. There were 312 claims in 2012, up from 200 the year before.

Many of the complaints focus on agencies tasked with political security, whose personnel are recruited exclusively from Fatah supporters.

Muhammad Jamil, head of the London-based Arab Organisation for Human Rights, called the forces’ crackdown a “systematic effort to silence differing political opinions, which undermines the cohesion of Palestinian society” and said Western countries funding and equipping them “bear a moral responsibility”.

The organisation surveyed 300 people jailed by the PA in political and security cases in the first half of 2012. Nearly a fifth said they had faced “cruel torture” during the period. Almost all said they had been tortured during previous jailings.

Hamas is similarly accused, by Fatah and rights groups, of widespread torture and political repression in the Gaza Strip.

In one small town, a former officer of the PA’s preventative security forces explained how his agency keeps a lid on Hamas by paying a monthly stipend to some 40 “snitches” to monitor mosques, schools, university elections and even funerals.

His men make arrests at any sign of Hamas spreading ideas, gaining recruits or weapons, said the officer, a Fatah stalwart, speaking on condition of anonymity.

“The hell with their ‘resistance’ and their rockets that do no real damage to Israel – it’s just a show to get followers. They hate us because we arrest their people…but we know their weapons are meant for us, to take power,” the man told Reuters.

Fatah, the former guerrilla movement of Yasser Arafat, was the undisputed dominant force in Palestinian political life for generations.

But after Arafat’s death in 2004, years of frustration with corruption and stalemate in peace talks with Israel led the more austere and religious Hamas to victory in parliamentary elections in the West Bank and Gaza in 2006.

The friction sparked a civil war between the two groups. Hundreds of people were killed and the Palestinian territories ended up under divided control. Each accuses the other of having carried out summary executions of their partisans.

“If they try that kind of coup here in the West Bank, my M16 is ready,” the security man said. “It’ll shoot straight.”

PA forces, formed after the 1993 Oslo Peace Accords, were first drawn from Fatah officers freed from Israeli jails after the first Palestinian Intifada (Uprising) began in 1987.

Palestinian security officials say their state-in-waiting needs a monopoly on weapons and that other groups must be disarmed to allow negotiations with Israel. They say their arrests focus only on weapons and planned attacks, and any abuse of prisoners is the work of a misguided few.

“President Abbas is the one who decides the national strategy, and he has chosen peaceful popular resistance, without arms,” Major General Adnan Damiri, a Fatah veteran and a founder of the Palestinian security forces, told Reuters.

“I grew up with nothing, a refugee with no shoes on my feet and for years I chose the way of the guerrilla,” Damiri said. “But like I always tell Israeli TV channels: We tried to throw you into the sea and you tried to throw us into the desert. We both failed, so we have to find a new way.”

For now, Hamas backers in the West Bank mainly keep a low profile or risk Israeli and Palestinian jails.

Yet the group hopes to ride a wave of upheaval that has swept long-repressed Islamists into power throughout the region, believing they represent ideas whose time has come.

In Silwad village in the West Bank, historian and Hamas supporter Awni Fares points to the rocky hills clustered with ancient olive trees where British colonial bases and Ottoman outposts once stood, long swept aside by history.

The PA’s inability to halt the spread of Jewish settlements in the West Bank or deliver a peace deal vindicates Hamas, which demonstrated its resolve in its latest war with Israel last November, said the bearded and bespectacled teacher.

“The sense is growing that through resistance, we can win,” Fares said. “Fighting occupation by any means is a right. You see Ofra settlement here? They attack us, they take our land. To us, Zionism is the worst kind of colonialism. It threatens our existence.

“There’s no room for a Gandhi here,” he added.

Fares has spent five years in Israeli jails and two months detained by the PA. He denies engaging in armed activity.

The PA’s rights body said 750 employees from public schools had complained of losing their jobs since 2007 for their party leanings, among many hundreds of other fired government workers.

Hamas’s West Bank rump takes moral high ground from its 2006 electoral victory, arguing that it was never given the opportunity to govern. Abbas has postponed elections for his own presidential post and extended his term for four years.

Idle in her Nablus office in the northern West Bank, Hamas legislator Mona Mansur sits beneath a portrait of her husband, a top Hamas political leader killed by an Israeli missile strike in 2001 at the height of the Palestinians’ Second Intifada.

“After gunmen burned down Hamas MPs’ offices in 2007, the security forces monitor visitors to my office. They even stopped and questioned a human rights lawyer,” she said.

With its charities and social services office shuttered by PA authorities, Mansur says there is no way Hamas can reach out to its support base and compete fairly if new polls are held.

“Fayyad’s bloc got less than 1 percent and we got more than 60. He becomes prime minister and we’re under their heels. Is this democracy?” she said, referring to Salam Fayyad, the Palestinian prime minister who resigned last month.

Fayyad, an independent, was a close ally of the West whose resignation is now seen as providing the opportunity for reconciliation between Fatah and Hamas.

Israel says Hamas presents an intractable terrorist threat and its reconciliation with Fatah would effectively kill any peace process.

Hamas’s campaign of suicide bombings in Israeli buses and cafes during the Second Intifada seared an indelible mark on Israel’s psyche and military strategy.

In a sprawling army base adjoining the Beit El settlement just north of the PA’s seat in Ramallah, Barak Raz, an Israeli military spokesman, a pistol at his side, spoke confidently of putting Hamas on the back foot.

Suicide bombings have stopped in Israel. Several factors have contributed to the improved security: Raz credits Israel’s own network of informants and its “separation barrier” – a wall built in 2002 to keep militants out and considered illegal by the United Nations.

Another of the main keys to Israeli security is the PA’s pursuit of Hamas, Raz said.

“The more they do, the less we have to,” he told Reuters. “And those who call this ‘collaboration’ are missing the point – that this is something they do out of their own interest.”

The PA-Israeli security cooperation has undermined Hamas’s ability to form cells and gain weapons. Israel says the group’s militants are determined to abduct an Israeli soldier or civilian as a bargaining chip to free Palestinian prisoners.

In 2011, Israel released 1,027 jailed Palestinians to free Israeli soldier Gilad Shalit, seized by Hamas guerrillas in 2006 and hidden away in Gaza. The exchange, Raz said, emboldened Hamas and gave it a “backwind” of popular support.

Washington strongly opposes reconciliation between Fatah and Hamas. U.S. officials hoped aid to the Palestinian security forces would defuse tensions with Israel and pave the way for the founding of a Palestinian state at peace alongside it. That hasn’t worked out.

“Our rhetoric was very good about supporting the moderates, Abbas and Fayyad – but financially and diplomatically, they have not been given enough to deliver the goods to their people,” said Steven White, a retired U.S. Marines major.

White served from 2005 to 2011 as a top adviser for the U.S. Security Coordinator for Israel and the Palestinian Territories, an American program facilitating PA cooperation with Israel.

The United States has channelled some $645 million toward building up the PA’s forces and judiciary since its 2007 split with Hamas, as well as some $2.4 billion in budgetary assistance since 2005, money that goes in part to paying salaries.

Human Rights Watch has repeatedly called upon Western governments to re-evaluate their aid to PA forces after several detainees died from suspected torture and no personnel were publicly convicted for abuse.

In a statement to Reuters, the European Union’s training mission for the civilian police said it encouraged the PA to have “all such allegations investigated as a matter of urgency”.

Hamas and many average Palestinians say the Western missions deliberately aimed to undermine the PA’s internal rivals, something White denied.

“Congressional and international conditions barred us from funding a government that refused to recognise Israel and renounce violence,” he said. “Hamas has stuck to their narrative. If it showed any realpolitik and accepted these conditions, Western countries would be in a tougher spot.”

Despite Repression, Hamas Survives in Shadows of Palestinian-Run West Bank