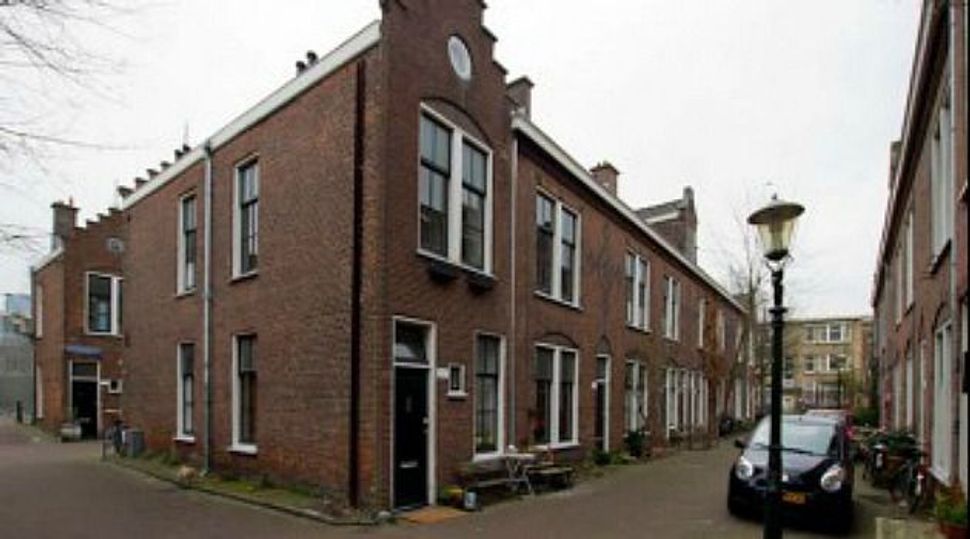 Jewish Enclave: About a dozen Jewish families live in a predominantly Muslim neighborhood of The Hague. Image by JTA

On a cold winter night in 2008, Wim Kortenoeven was startled by the crackling of a large fire raging near his home on the edge of this city’s last remaining Jewish enclave.

Rushing from his apartment, Kortenoeven walked 70 yards and crossed the line separating his Jewish-owned housing project from the predominantly Muslim borough containing what Dutch media have taken to calling the “Sharia triangle” — Sharia referring to Islamic law.

On the seam line, he encountered dozens of Dutch Moroccans looking at several parked cars that vandals had set on fire.

Fearing explosions, Kortenoeven shouted to the people looking down from their balconies to go back inside, but his intervention was ignored.

“Onlookers started closing in on me, shoving me, asking if I was police, what I was doing in ‘their neighborhood,’” he said. Kortenoeven scuffled with one man but managed to get away.

Kortenoeven has since moved, but about a dozen Jewish households remain in the little-known Jewish enclave known as the Van Ostade Housing Project. The gated community of 200 units built in the 1880s to house poor Jews is surrounded by the Schilderswijk neighborhood — 91 percent of its residents are foreign-born, half of them Moroccan or Turkish.

Earlier this month, Schilderswijk became national news after a Dutch newspaper reported that part of the neighborhood had become a “Sharia triangle” that police dare not enter. The report prompted a high-profile visit from the stridently anti-Muslim politician Geert Wilders, whose party called this month for a government study of anti-Semitism among Muslim immigrants.

“It is unacceptable that women in skirts should be harassed here,” Wilders said during his visit. “This is Holland. Sharia does not apply here.”

Dutch police have denied that Schilderswijk has become a lawless territory and insist they have security under control. But the Holland Wilders fears is already a reality for some Jews of Van Ostade.

“You get a lot of stares and comments,” said Jewish resident Iris Tzur, who says it’s not comfortable for a blonde woman in a dress to walk the streets of Schilderswijk.

Pinchas Moelker, an Orthodox Jewish resident, says he hides his yarmulke under a hat and always tucks in the knitted fringes of his prayer shawl. He also installed a low-profile mezuzah that blends into the door frame.

Others here have installed mezuzahs inside their doors.

Such concerns aside, the remaining Jews of Van Ostade have no plans to leave, saying they enjoy a sense of togetherness that richer, less immigrant-heavy neighborhoods lack. Moelker hosts weekly Shabbat dinners for his neighbors, “who get so drunk that they zigzag all the way back home.” And Avi Genosar, who served in an elite Israeli army unit before coming to Holland to study, says the area’s high crime levels don’t bother him.

“Here I can get fresh, cheap vegetables, tahini, olive oil and the other Middle Eastern foods I’m used to,” Genosar says.

Things were much different when the Van Ostade Jewish Housing Project was built by Jewish philanthropists more than a century ago.

In 1880, there were about 6,000 Jews in The Hague, many of them living in penury in the city’s disease-infested slums, according to the Jewish Historical Museum in Amsterdam. Van Ostade was one of Western Europe’s largest Jewish housing projects, bringing dozens of Jewish families in from the cold and charging them only a nominal rent.

By 1930, the city’s Jewish population had grown to 10,000 and many more families moved to Van Ostade, but even then Jews comprised only 35 percent of the project’s residents. Many Jewish families passed up the subsidized rent, preferring to live near the synagogue about a half-mile away.

During the Holocaust, virtually all of the city’s Jews were deported and murdered. Today, only about 250 self-identified Jews remain. When waves of Muslim immigrants arrived in the 1970s, the old synagogue became a mosque.

A Star of David in the architecture of the Van Ostade Jewish Housing Project in The Hague. (The Center for Information and Docimentation on Israel, www.cidi.tv)

Still, Van Ostade remained in Jewish hands, even as the old Jewish neighborhood near the synagogue became the local Chinatown. The project is run by an all-Jewish board that rents out subsidized apartments to low-income tenants. Jewish residents are encouraged to spread the word among their Jewish friends, but there are few takers.

“The atmosphere in the Jewish neighborhood itself is very nice,” Kortenoeven says. “Everybody greets you hello. The people are good folks. Many of them are educated people, artists, some students. The problem is some elements in the environment around the neighborhood.”

The impact of Muslim immigration can be felt in other ways in Schilderswijk, as well. Earlier this month, De Telegraaf reported that a local school that had been a Jewish institution before the Holocaust shelved plans to install a commemorative plaque for fear it would upset Muslims. Separately, a sign advertising an exhibition about the school’s Jewish history had to be placed inside lest it upset the locals, a co-organizer of the event told De Telegraaf.

Gerard Brasjen, a spokesman for the school’s board, told JTA he was not aware of the sign issue. The plaque placement, he said, had nothing to do with Muslim sensitivities.

“The plan to place it stalled not so much because of the Jewish-Muslim issue but because it’s perhaps not very wise to put up any sort of plaque in the Schilderswijk,” Brasjen said. “It’s no quiet area, you know.”