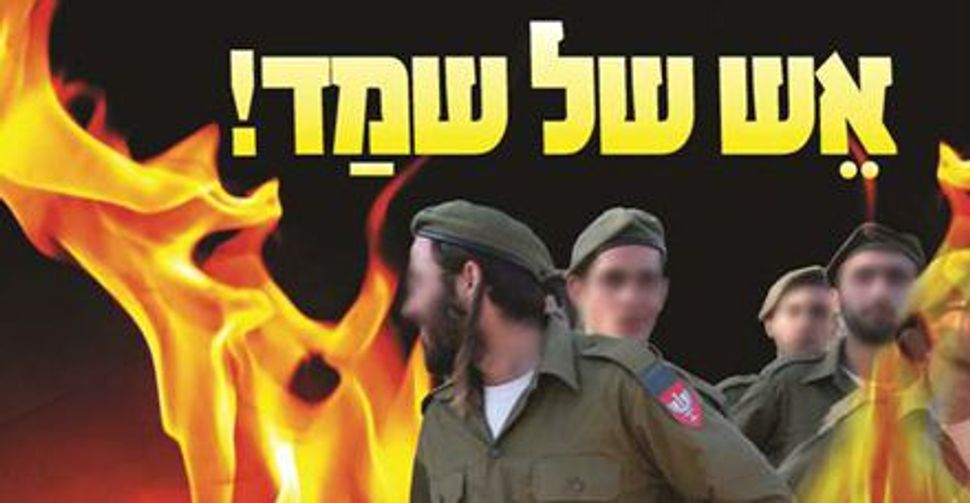 Posters advertising a massive ultra-Orthodox rally scheduled for this Sunday in Manhattan employ highly inflammatory language against Israel and the Israeli army.

“The evil rulers in the Holy Land want to incite and seduce young men and teenagers to acquiesce to idol worship and to participate in the impure army,” reads one Yiddish and Hebrew poster, a digital copy of which was obtained and translated by the Forward.

Leaders of the Satmar Hasidic community called the protest to oppose the Israeli government’s recent efforts to draft ultra-Orthodox Israelis. Organizers expect upwards of 15,000 ultra-Orthodox protesters in Foley Square in downtown Manhattan at 3pm on Sunday.

Though Satmar Hasidim are theologically anti-Zionist, event spokesman Michael Tobman insisted that the rally itself is focused narrowly on the issue of the draft. “This is to denounce in the strongest possible terms the misguided impending Israeli policy to conscript and to extend mandatory military service,” Tobman said. “This is about a very specific policy and political issue. It’s just not about that larger meta-ideological schism,” Tobman said, referring to Satmar anti-Zionism.

The Yiddish-language posters, however, decry not only the new Orthodox draft policy, but also the Israeli government and the army itself.

One poster, which depicts a bloody dagger plunged into a sea of men wearing black hats, warns in blood-smeared text that “the evil ones in the Holy Land have lifted up a sword” against the ultra-Orthodox community in Israel.

Extending Israel’s compulsory military service to the ultra-Orthodox, who have been exempted by law for the entire history of the Israeli state, was a major issue in the last Israeli election. A Knesset committee agreed on May 29 to a piece of draft legislation that would force most ultra-Orthodox men to serve in the military and impose criminal penalties on draft-dodgers. Ultra-Orthodox Jews in Israel and the United States strongly oppose the legislation, arguing that it threatens their culture and lifestyle.