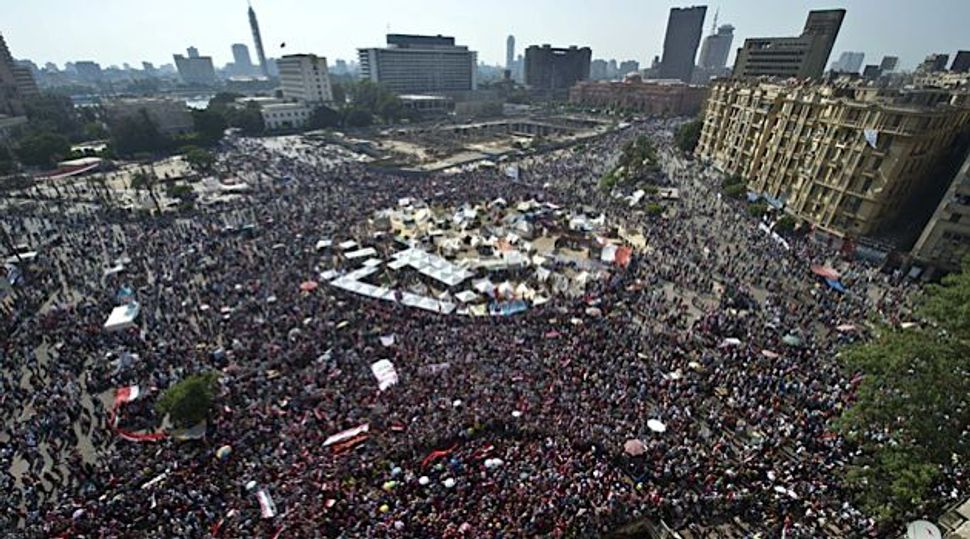 Hundreds of thousands of Egyptians in protests across the country called on President Mohamed Morsi to step down.

On the first anniversary of Morsi’s inauguration, anti-government demonstrators on Sunday evening in Cairo reportedly set the national headquarters of the ruling Muslim Brotherhood party on fire with fire bombs.

Morsi reportedly was transferred from the presidential palace to the Presidential Guard’s headquarters for better security.

Protesters marched outside the presidential palace, as well as in Tahrir Square. Large rallies reportedly also took place in other cities, including Alexandria and Suez.

The demonstrators reportedly called for Morsi’s ouster and protested against the radical Muslim Brotherhood.

Opposition organizations claim to have collected 22 million signatures calling on Morsi to resign. Israeli officials so far have made no official statements regarding the violence in Egypt.

On Friday, Jewish-American college student Andrew Pochter was stabbed to death during a protest against the Muslim Brotherhood in Alexandria.

Pochter, a student at Kenyon College in Ohio near Columbus, was in Egypt teaching English to children and studying Arabic.