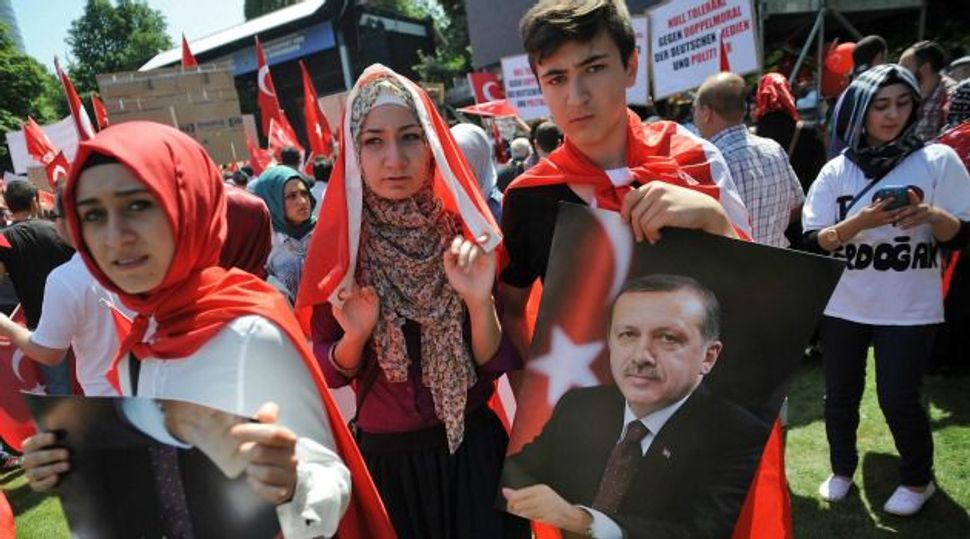 The Berlin branch of the American Jewish Committee is calling German authorities to investigate anti-Israel rhetoric that took place at a rally of Turkish immigrants in Düsseldorf.

Chants of “Down with Israel” and “Israel be cursed” in Turkish were recited at Sunday’s demonstration, according to an AJC-Berlin press release.

“We are horrified that supporters of Prime Minister Erdogan are using political protests in Germany to fan anti-Israel sentiment,” said AJC Berlin Director Deidre Berger. “Stoking the flames of anti-Semitism through denunciations of Israeli policies is dangerous.”

Berger called on German politicians to condemn the anti-Israel agitation.

The chants were brought to public attention by Lale Akgun, a former member of the German parliament. Akgun, who was born in Turkey and immigrated to Germany when she was a child, attended the demonstration in Düsseldorf and reported about the anti-Israel chants on her Facebook page.

An estimated 3.5 million Turkish immigrants live in Germany, the largest such community outside of Turkey. Thousands of them have participated in large demonstrations throughout Germany in recent weeks regarding the current disturbances in Istanbul.