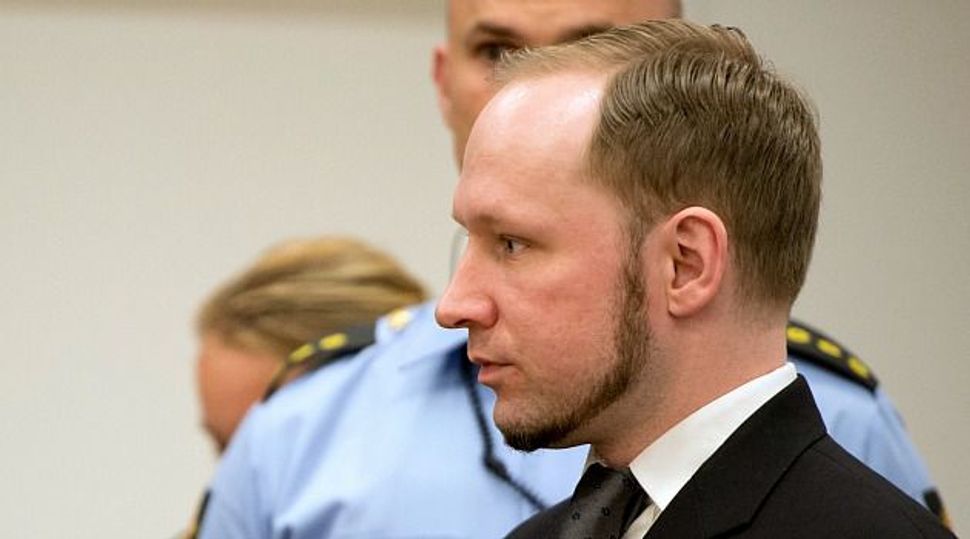 Birds of Feather: Norweigian mass killer Anders Breivik, shown here in court, has been arrested after his wife tried to buy guns in France. Image by getty images

A neo-Nazi linked to Norwegian mass killer Anders Behring Breivik was arrested in southwestern France on Tuesday after his wife bought four rifles, raising suspicions he could turn to violence, the Paris prosecutor’s office said.

Kristian Vikernes, who is also a convicted murderer from Norway, had in the past received a copy of a manifesto from Breivik, the office and media reports said.

Officers were searching his home for weapons and explosives, a police source told Reuters.

Far-right militant Breivik killed 77 people in a bombing in central Oslo and a shooting spree on a nearby island in July 2011. He was imprisoned for the maximum 21-year term last year.

Breivik sent a copy of a manifesto setting out his ideology to Vikernes, an official at the prosecutor’s office said.

“That was at the origin of the investigation … There were several suspicions that made the services fear he could possibly carry out a violent act,” the official said.

The “Norwegian neo-Nazi” had been arrested in Correze, the office told Reuters.

Vikernes’ wife had a legal firearms permit when she bought the four rifles, the official said.

On his website, Vikernes discusses Breivik’s manifesto, but also criticises him for killing innocent Norwegians.

Breivik’s 1,500-page manifesto outlined his planned crusade against Muslims, who he said were taking over Europe and could only be defeated through a violent civil war.

Vikernes, a heavy metal musician and writer known as Varg, was convicted in 1994 of stabbing a man to death in Oslo and burning down several churches.

He was released in 2009 and moved to France with his wife and three children.