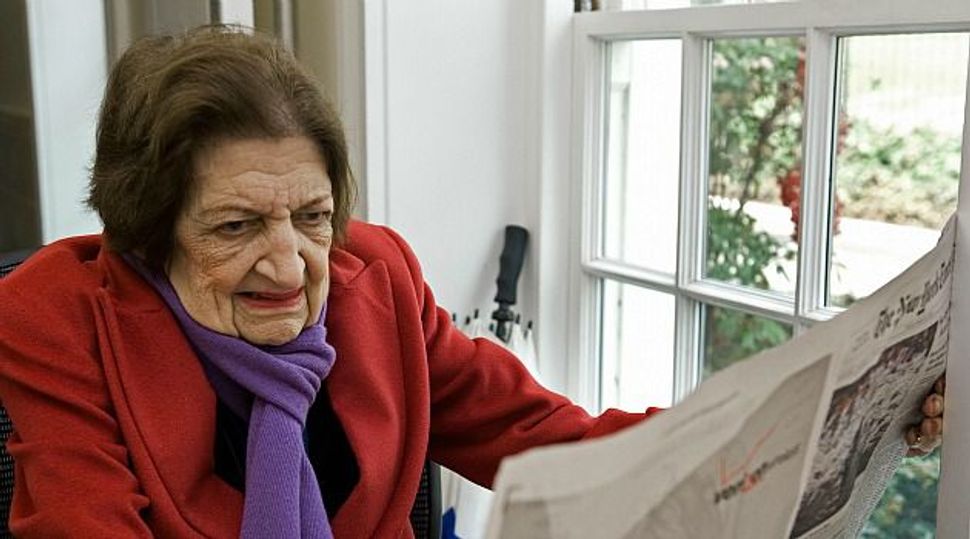 Thank You, Mr. President: Helen Thomas served as White House correspondent for 49 years before retiring amid a controversial comment about Israel and the Palestinians. Image by getty images

Former White House correspondent Helen Thomas, a trailblazing journalist who reported on every U.S. president from John Kennedy to Barack Obama, died on Saturday at the age of 92, The Gridiron Club and Foundation said.

Thomas, who worked the White House beat for 49 years for United Press International and Hearst newspapers, died after a long illness, Susan Hahn of the Washington journalists’ organization said in a statement.

As the senior news service correspondent at the White House, Thomas ended dozens of presidential news conferences with the familiar phrase “Thank you, Mr. President.”

She was known for her straight-to-the-point questioning of presidents and press secretaries in a manner that some considered dogged. Others, including many fellow reporters, considered her style in her later years to be too combative and agenda-driven.

President Barack Obama in a statement praised “her fierce belief that our democracy works best when we ask tough questions and hold our leaders to account,” and noted that in her long tenure Thomas “never failed to keep presidents – myself included – on their toes.”

In the last 10 years of her career Thomas was a columnist for Hearst, a job that allowed her opinions to surface more than in her work as a hard-news reporter for UPI.

Thomas announced in June 2010 that she was retiring from Hearst, effective immediately, after comments she made about Israel and the Palestinians, including that Israel should “get the hell out of Palestine,” were captured on videotape and widely disseminated on the Internet.

Thomas later issued a statement: “I deeply regret my comments I made last week regarding the Israelis and the Palestinians. They do not reflect my heart-felt belief that peace will come to the Middle East only when all parties recognize the need for mutual respect and tolerance. May that day come soon.”

Thomas believed the Washington media had grown soft and was reluctant to challenge government, views she shared in her 2007 book “Watchdogs of Democracy? The Waning Washington Press Corps and How It Has Failed the Public.”

She was especially rough on former President George W. Bush, who in 2003 she described as the “worst president ever,” and the Iraq war, which she felt the media had abetted by not challenging Bush strongly enough on it.

In 2009 she asked President Barack Obama, “When are you going to get out of Afghanistan? Why are we continuing to kill and die there? What is the real excuse and don’t give us this Bushism ‘If we don’t go there, they’ll all come here.’”

Veteran NBC News correspondent Andrea Mitchell on Saturday tweeted that Thomas “made it possible for all of us who followed,” and Dana Perino, press secretary for George W. Bush, tweeted, “First day I ever took the podium she came to encourage me.”

Thomas was assigned to the White House in 1961 by UPI in part because of the great interest in first lady Jacqueline Kennedy, as well as the new young president.

She would go on to become the dean of the White House media corps and her front-row center chair in the briefing room eventually had a plaque with her name, the only seat so designated.

Thomas grew up in Detroit, the daughter of Lebanese immigrants. Middle Eastern affairs were a strong interest and impromptu comments about Israel and the Palestinians in May 2010 were her undoing.

Asked by an interviewer from the website rabbilive.com if she had any comments about Israel, Thomas responded, “Get the hell out of Palestine.” She said Jews should “go home, to Poland and Germany, America and everywhere else.”

After the interview spread on the Internet, her comments were criticized by the White House, the White House Correspondents’ Association, the co-author of one of her books and the agency that handled her speaking engagements, among others. Shortly after, she announced her retirement, two months short of her 90th birthday.

Thomas established a number of firsts for women journalists in becoming one of Washington’s best known reporters. She was the first woman officer in the White House Correspondents Association in its 50-year history, becoming its first woman president. In 1975, she broke the 90-year all-male barrier at the Gridiron Club, an organization of leading Washington journalists, and became its first female president in 1993.

She also supported scores of women starting out in the news business.

Thomas became UPI White House bureau chief in 1974, the first woman to head a wire service bureau there. She stayed in that position until 2000 when she joined Hearst.

Thomas’s career began as a copy girl on the Washington Daily News and she joined what was then known as United Press in 1943.

Thomas first came to public notice during the Watergate era when she started receiving late-night phone calls from Martha Mitchell, the wife of Attorney General John Mitchell, discussing the scandal.

“I have witnessed presidents in situations of great triumph and adulation, when they are riding the crest of personal fulfillment, and I have seen them fall off their pedestals through an abuse of power or what President Clinton called ‘a lapse of critical judgment,’” she wrote in the memoir “Front Row at the White House: My Life and Times.”

Thomas married a professional rival, Douglas Cornell of the Associated Press, in 1971. He died in 1982.