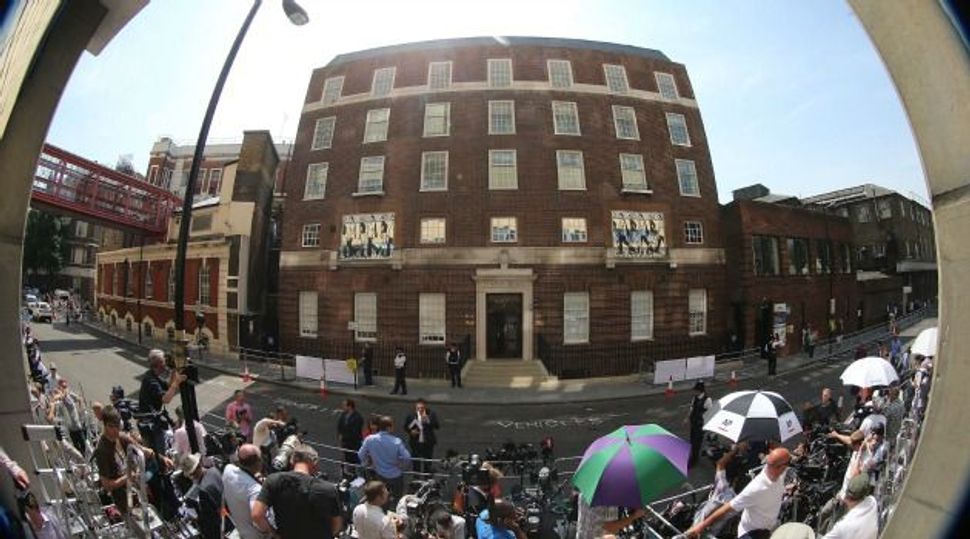 Jewish Connection: Media gather outside the Lindo Wing of St. Mary?s Hospital in London, where Kate Middleton was expected to give birth to her first child. Who knew the annex was funded by a wealthy Sephardic Jews? Image by getty images

When Kate Middleton gave birth to a baby boy after being rushed to the Lindo Wing at St Mary’s Hospital, anxious to avoid hundreds of paparazzi camping outside.

She almost certainly missed the little plaque at the entrance, which pays tribute to the anonymous donor “who was not unmindful of his neighbors’ needs” and who paid for the wing in 1937.

In fact he wasn’t so anonymous: the wing is named after him. Frank Charles Lindo was a wealthy Jew, descended on his mother Adeline’s side from the Heilbut family, and on his father Charles’s side, it appears, from one of London’s most famous Sephardi families. While it is not clear exactly how he is related, the Lindo name is particularly associated with the silver Lindo Lamp, the earliest known English menorah, which was commissioned in 1709 on the marriage of Elias Lindo to Rachel Lopes Ferreira.

Born in 1872, Frank Lindo married Violet Portman, a member of a British aristocratic family and a member of the board of management at St Mary’s. When Lindo died in 1938, he had donated £111,500 to the hospital, including £5,000 on the morning of the opening of the Lindo Wing so that it could open free of debt. While nowadays considered state-of-the-art, at the time it was meant for ”patients of moderate means” who could not afford private care but were too well off to be treated in a charity hospital for the “deserving poor”. In his will, Lindo left his house at Aldeburgh to the hospital as a convalescent home for the nursing staff, with an endowment fund of £25,000 for its maintenance.

“His gifts, sympathy and understanding made possible the erection and equipment of this building for the relief of sickness and suffering,” says the memorial plaque, “and will remain for all time a monument of his outstanding generosity.”

Surely he would have shepped much nachas from the royal baby born in the birthing suite he funded.

The royal couple, officially known as the Duke and Duchess of Cambridge, travelled by car to the St. Mary’s Hospital in west London before dawn and entered through a back door to avoid media camped outside the main entrance.

Kate is due to give birth to the child at the private Lindo wing of the hospital, where her husband was born to the late Princess Diana in 1982.

Kate and William, both aged 31, met when they were students at St. Andrews University and were married in April 2011 in a spectacular wedding broadcast around the world.

The royal birth has provoked a similar frenzy, with national and international media keeping up a deluge of speculative reports throughout Monday from outside the hospital.

The birth will be announced in the traditional way with an envelope containing the baby’s details taken from the hospital to Queen Elizabeth’s London residence, Buckingham Palace, where the news will be posted on a board outside the main gates.

“Things are progressing as normal. It wasn’t an emergency,” a royal spokeswoman said.

Prime Minister David Cameron said it was an exciting time for Britain.

“Best wishes to them, a very exciting occasion and the whole country is excited with them. Everyone’s hoping for the best,” Cameron told the BBC.

The baby will arrive at a time when the royal family is riding a wave of popularity. An Ipsos Mori poll last week showed 77 percent of Britons were in favour of remaining a monarchy over a republic, close to its best-ever level of support.

The royal birth might also help raise the national mood, battered by economic problems, unemployment, cuts in public spending and a rising gap between rich and poor.

The festive atmosphere has been heightened by a heatwave and a string of British sporting victories in tennis, rugby, cricket and cycling.

Royal supporter Terry Hutt, 78, who has waited outside the hospital for 12 days, acknowledged his joy over the imminent arrival.

“We’ve got a lovely married couple and baby will make three and they will be a family. It means everything to me, girl or boy, as they will be king or queen one day,” said Hutt, dressed in a suit and hat emblazoned with Union Jacks.

Royal sources said Kate has planned a natural birth with William, a Royal Air Force search and rescue helicopter pilot, to be at her side. The royal couple do not know the baby’s sex.

The child will be third in line to the throne regardless of gender behind grandfather Prince Charles and father William after Britain and 16 other Commonwealth nations agreed to change royal succession rules so males no longer take precedence.

“Fundamentally all of them have agreed in writing to this,” Cameron said. “It would not be a problem.”

Royal officials have confirmed the baby will be known as His or Her Highness Prince or Princess (name) of Cambridge. The name may not be announced immediately – it took more than a week for an announcement of William’s name.

Bookmakers have a girl as the favourite with preferred names Alexandra, Victoria, Charlotte and Diana, in honour of William’s mother, who died in a car crash in Paris in 1997. George is the favourite boy’s name followed by James.

Queen Elizabeth, who celebrated 60 years on the throne last year, will be among the first to be informed of the arrival of the baby. It will be delivered by Marcus Setchell, the queen’s former gynaecologist.

After the birth, commentators said Kate was expected to spend time at her parents’ house in the village of Bucklebury, about 50 miles (80 km) west of London, before eventually moving to London’s Kensington Palace, William’s childhood home.

The royal baby has already generated huge excitement globally, fuelled by the massive popularity of Kate, who has become a fashion icon, with her attire scrutinised and copied every time she steps out in public.

Scrutiny of Princess Diana’s life and her death while pursued by paparazzi instilled a deep distaste for the media in William and he has done his best to shield his wife from such attention.

Analysts said any economic impact from the royal birth would be positive but limited, with no public holiday and purchases of souvenirs or alcohol to toast the baby likely to be the main boosts.

“Having said that there is a lot of international interest in the royal baby with high foreign media coverage, which does help to advertise the UK globally,” said Howard Archer, economist from IHS Global Insight.

Not all Britons, however, were giddy over the event.

The website of the Guardian newspaper offered readers the option of clicking on a “Republican” prompt, removing all references to the royal birth from its pages.