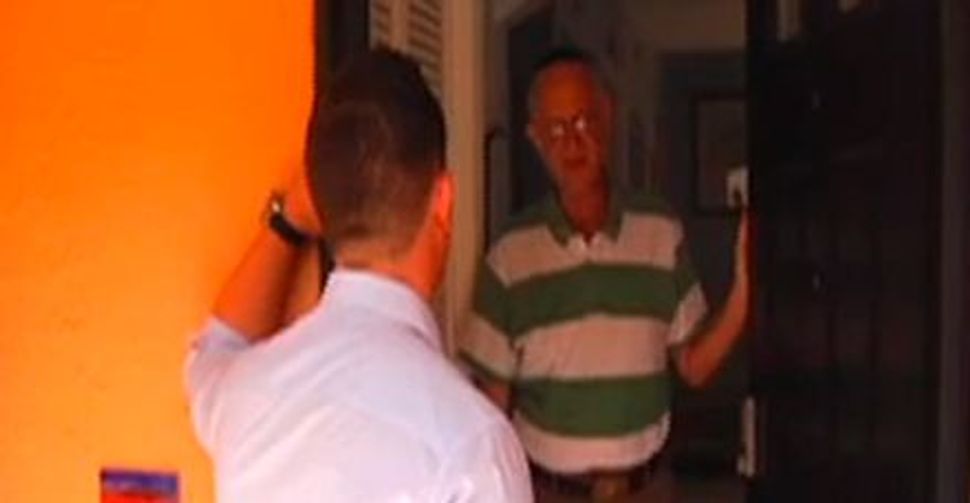 No Comment: Accused abuser Richard Andron spoke to a local TV station but declined to comment on the allegations against him.

Richard Andron, the man accused of sexually abusing boys in New York and New Jersey decades ago, has spoken for the first time — though he did not say much.

Andron, 67, answered the door of his Boca Raton home to a reporter from CBS12 News, in West Palm Beach, Florida, on July 25. Wearing a black yarmulke and looking frail, Andron spoke only to decline the CBS reporter’s offer to air Andron’s version of events.

“I need to talk to an attorney before I talk to anybody,” Andron said, before waving at the camera and closing his door.

Andron, a longtime member of the Boca Raton Synagogue, was named in a high-profile lawsuit filed July 8 in U.S. District Court in White Plains, N.Y. He is one of three men accused of abuse by former students of Yeshiva University High School for Boys, in Manhattan.

The lawsuit alleges that Andron was “allowed to roam the halls” of Y.U.’s high school dormitory during the late 1970s and early ’80s even though he had nothing to do with the school. It cites three men — a Y.U. college student and two Y.U. high school students — who say Andron invited them to stay at his apartment, where he attempted to touch or did touch their genitals.

The Forward has identified a further seven men who say they were abused by Andron in New York or New Jersey during the same period.

Some angry Boca Raton congregants want to know whether the rabbi of the Boca Raton Synagogue, Efrem Goldberg, his predecessors or board members were aware of the allegations against Andron before they became public.

Goldberg announced July 24 that the synagogue’s board of directors has set up a special committee to reexamine how the synagogue deals with members accused of abuse and congregant safety.