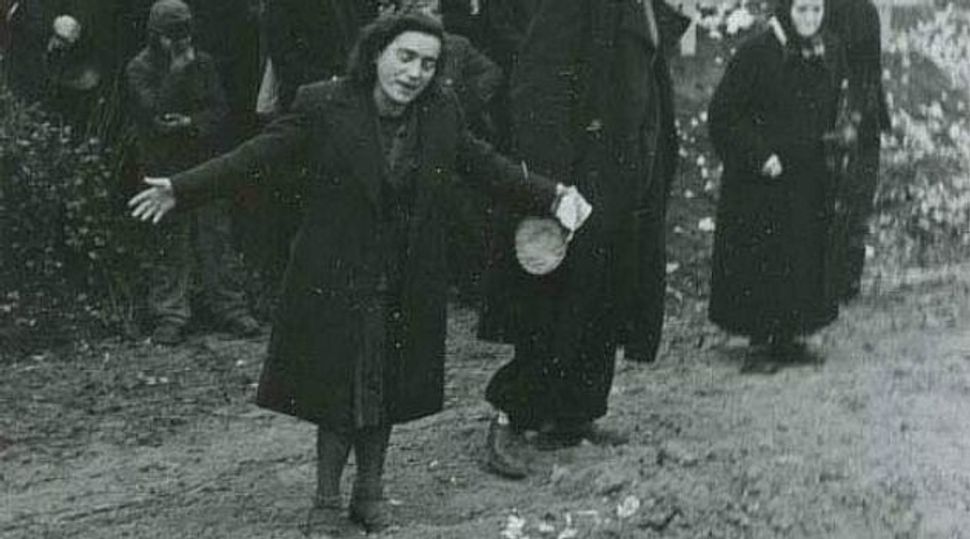 Lucija Rajner last saw her father, Vladislav, on Nov. 14, 1941, through a barbed-wire fence at a concentration camp in Belgrade.

That autumn, Rajner and her mother passed food, letters and bedding to him, until a guard told them he wouldn’t need such supplies anymore. Rajner never learned his fate, but assumes he died the same way as 6,000 other Jews and 1,500 Roma who passed through the camp – gunned down or gassed en masse.

A small plaque is all that marks the location’s dark history. It was screwed to a crumbling brick wall in 2006, when most of the land had already been sold for 27 million euros ($35 million) to a retail tycoon who plans to spend 160 million euros to turn it into the biggest shopping mall in the Balkans.

Rajner and a small group of historians and activists say the destruction of Topovske Supe is emblematic of how far Serbia still has to go in recognising the Holocaust on its soil.

“I don’t know why the state shows this kind of disrespect to things which should not be forgotten,” said 79-year-old Rajner.

In a region dotted with memorials to Partisan battle victories, the 70,000 Jews who died in Yugoslavia during World War Two were subsumed into the narrative of Yugoslav victims of fascism, part of the doctrine of ‘Brotherhood and Unity’ propagated by Josip Broz Tito to diminish national and ethnic differences within the federation he ruled from 1945 to 1980.

After Estonia, Serbia was the second Nazi-occupied territory in Europe to be formally declared ‘free of Jews’ in August 1942, when 90 percent of the country’s 16,000 Jews had perished.

With Tito’s death, unity gave way to the virulent nationalism that would eventually tear Yugoslavia apart, and Serbia began stressing the suffering of Serbs at the hands of Nazi puppet rulers in Croatia.

“But if you ask them about Serbia, it is a remnant of how things were seen in the communist era, in which there was no recognition,” he said.

Serbia hopes to start talks on joining the European Union in January next year, a process that will require more work in resolving regional tensions two decades since Yugoslavia’s descended into war. But, Byford said, it may also bring pressure on Serbia to confront the fate of thousands of Yugoslav Jews.

“There will be pressure to construct a Holocaust memorial and to include the Holocaust in school curricula,” he said.

Serbia is a signatory to the non-binding 2009 Terezin declaration, committing to return property to the families of Holocaust victims and to ensure mass graves are identified and protected. But implementation has been stalled.

Serbia lags behind several of its neighbours in recognising the crimes committed against Jews on its soil. Neighbouring Hungary, Croatia and Macedonia each have museums dedicated to the Holocaust. A small museum in Serbia, founded in the 1960s, looks at the general history of Jews in Yugoslavia.

To its opponents, the shopping mall is all the more galling given who stands behind it. Miroslav Miskovic, head of the Delta empire behind the project, is one of the richest men in the Balkans and a symbol for many Serbs of the murky nexus of politics and business that has dogged the country since the days of strongman Slobodan Milosevic during the 1990s.

Miskovic made a fortune during Yugoslavia’s collapse despite international sanctions on Serbia and a permanent state of crisis. He thrived further under the democrats who replaced Milosevic in 2000.

Then in December last year, police arrested Miskovic on suspicion of fraud. He posted a record $16 million bail in July pending trial. Delta and Miskovic have denied any wrongdoing.

Asked about Topovske Supe, Delta points to its choice of Israeli architecture firm MYS to work on the project, having been involved in another Delta shopping mall in Belgrade.

Delta Real Estate vice president Vojislav Glavinic told Reuters MYS would work with the Jewish community and the Israeli embassy to design a memorial that would be “visible and representative”.

Glavinic said in a statement that Delta expected to have the necessary building permits from the city government by the end of the year.

But the project could yet run into opposition from Serbia’s Agency for Protection for Cultural Monuments, which says it has not received an application from Delta for permission to build.

“As the institution whose mission is to save, conserve and present important sites for future generations, we would like to save and conserve all the buildings of Topovske Supe and represent the Holocaust that happened there to the public,” the agency’s deputy director, Aleksandra Fulgozi, told Reuters.

Topovske Supe is not the only former concentration camp in the Serbian capital. More than 6,000 Jewish women and children are believed to have perished at Sajmiste, opened on the site of the Belgrade fairground which fell under the control of the Nazi puppet regime in Croatia.

Authorities have marked the spot with a memorial, though critics believe the move had more to do with the Partisan fighters and Serb political prisoners who died there too.

Much of the location has been turned into housing, restaurants and a sports club. “The fact that we allow two places where so many people were held, where almost no one made it out alive, to be used in this manner is emblematic of Serbia’s culture of forgetting,” said Teodor Kovac, 90, who lost his father at Topovske Supe and his mother at Staro Sajmiste.

“No one wants to talk about the fact that without collaborators from here, the Nazis would never have been so effective,” she said. “This is not just about Jews; it’s a general carelessness towards important history.”