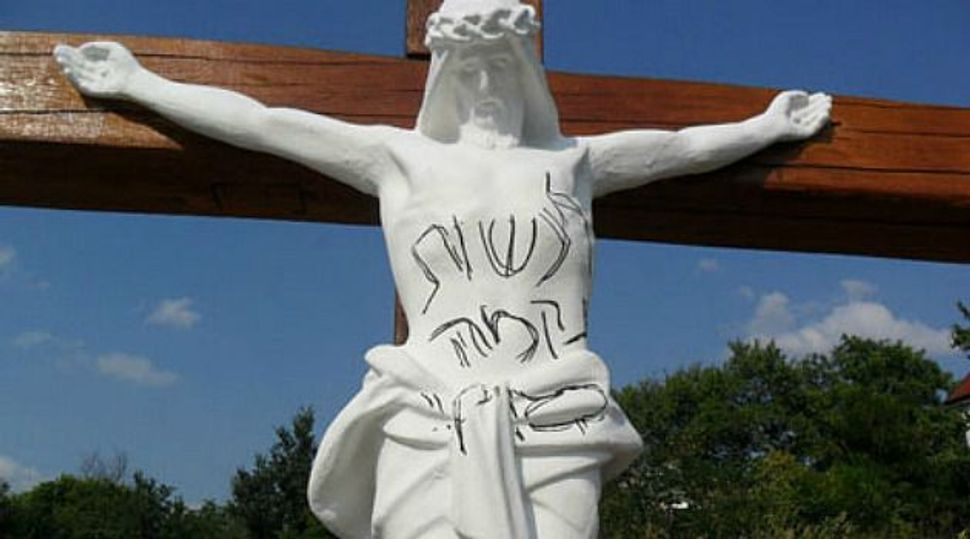 Hebrew graffiti was discovered Aug. 12 on a cross opposite the grave of Rabbi Nachman of Breslov, the 18th century founder of the Breslov hasidic movement, the Ukrainian news site allday.in.ua reported

“To exact vengeance on the gentiles,” reads the message, which was scrawled across the torso of a figure of Jesus Christ. A further inscription on Jesus’ leg reads, “Stop desecrating the name of God.”

Uman is a major pilgrimage site for followers of Rabbi Nachman, whose gravesite is the focal point of an annual Rosh Hashanah celebration. Last year, the festivities drew an estimated 40,000 Jews.

The cross was installed the summer, timed to coincide with the 1,025th anniversary of the mass conversion of medieval kingdom of Kievan Rus, the precursor of contemporary Russia and Ukraine.

Tensions between pilgrims and local citizens have risen in recent years as the numbers of pilgrims have increased.

In the wake of the graffiti incident, Jewish leaders in Uman have called for the cross’s relocation.

“We respect other religions, and don’t wish to damage symbols of other religions. But, unfortunately, not all of our coreligionists understand this. They could break or destroy the cross. That would lead to a genuine war between hasidim and Christians. We cannot allow that, so we request that the cross be moved to a different location,” said Shimon Busquila, a representative of the Rabbi Nachman International Fund, who was quoted by the Russian news site Korrespondent.ru.

One local who asked not to be identified told Vzglyad, “If they touch the cross, we will retaliate on the grave of their tzaddik.”

Sergei Yaremchuk, a member of the local committee of Svoboda, Ukraine’s right-wing, nationalist political party, described the incident as “a provocation to incite ethnic hatred.”