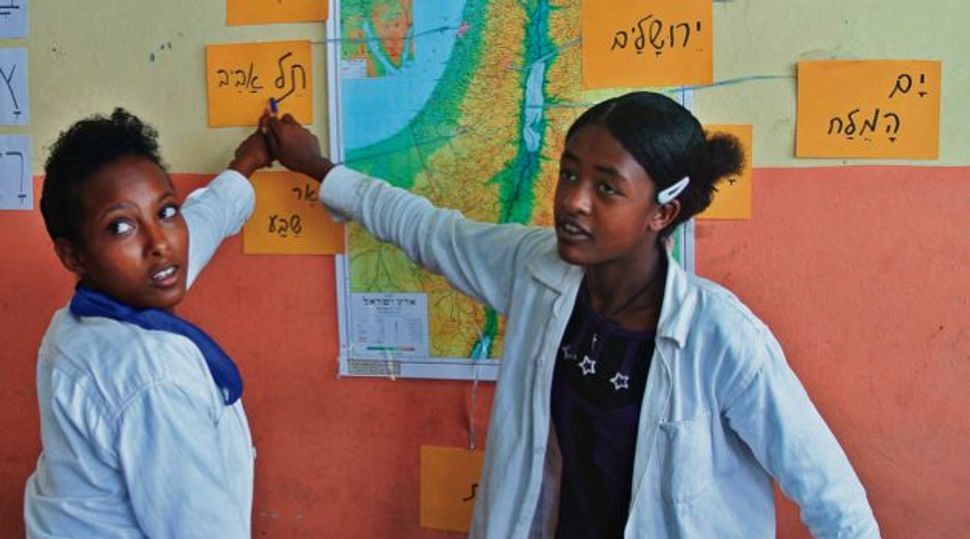 Geography Class: Ethiopian Jewish students locate cities on a map of Israel at the Jewish Agency school in Gondar. Image by getty images

Jewish Agency Chairman Natan Sharansky turned over the keys to the Jewish school of Gondar, Ethiopia, to the town’s mayor.

Monday’s handover ceremony of the school, which was funded and maintained by the Jewish Agency, comes as the final flight of Ethiopian immigrants prepares to leave for Israel.

Some 2,500 Ethiopian children awaiting their immigration to the Jewish state studied in the school. The Jewish Agency donated all the school buildings and equipment to the municipality of Gondar.

“Jews lived in Gondar for 2,500 years however, their longing to return home never weakened,” Sharansky said at the ceremony. “Today we bring to an end a journey that spans thousands of years — the conclusion of Operation Wings of a Dove.”

Operation Wings of a Dove was launched in November 2010 when the Israeli government decided to check the aliyah eligibility of an additional 8,000 or so Ethiopians.

The petitioners are known as Falash Mura — Ethiopians who claim links to descendants of Jews who converted to Christianity generations ago but who now seek to return to Judaism and immigrate to Israel. They have been accepted to Israel under different rules than those governing other immigrants.

A steady trickle of approximately 200 Ethiopian immigrants per month has been coming to Israel since 2010,

A final flight of 400 Ethiopian immigrants is set to arrive in Israel on Aug. 28. Nearly 7,000 immigrants from Ethiopia, the majority of whom are Falash Mura, have immigrated to Israel since 2010.