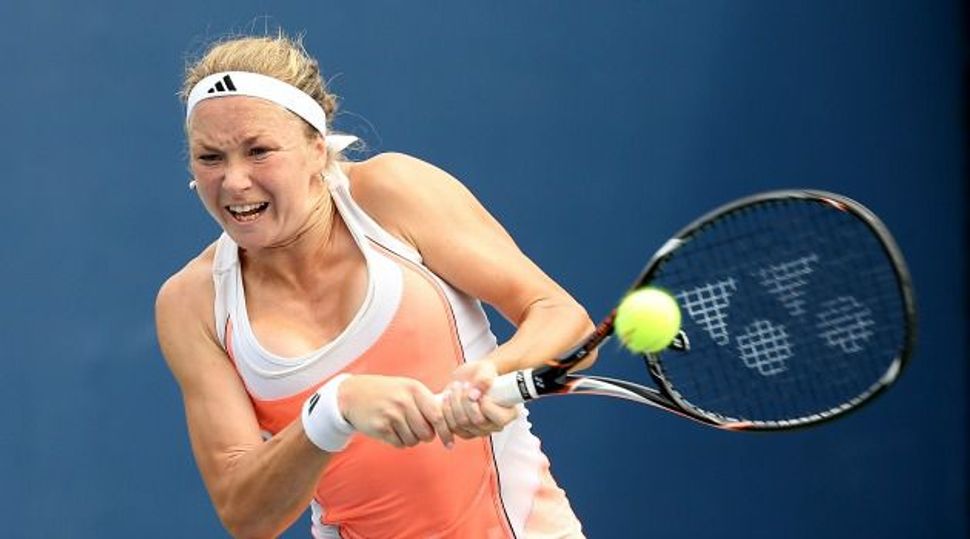 It was a tournament of firsts for Israeli Julia Glushko but in the end there was only the sting of disappointment after she was ousted in the third round of the U.S. Open on Saturday.

The 23-year-old qualifier had four chances to reach the round of 16 but the dream run fell short against Daniela Hantuchova of Slovakia, who advanced with a 3-6 7-5 7-6 (4) victory.

Glushko first won three matches to qualify. She beat 20th-seeded Russian Nadia Petrova 6-3 6-4 in the opening round of the main draw for the first tour-level win of her career and followed that by beating wildcard Sachia Vickery 7-5 6-3.

Although Glushko held four match points on Hantuchova’s serve in the 10th game of the third set, she failed to convert any and eventually lost in a climactic tiebreaker 7-4 after saving two match points herself in the decider.

“It was a good experience. It was my first time playing third round in a slam,” Glushko told Reuters before the pain of losing took over her emotions.

“I’m just so disappointed from today that I can’t be happy yet for it. I’m a happy person, just so sad.”

Glushko was born in Ukraine to tennis coaching parents and moved to Israel when she was nine years old.

“I grew up in Israel and I totally have the mentality of an Israeli person,” she said with a laugh.

The second-lowest ranked player left in the draw at 128, Glushko felt bad about not quite matching the battling example of her mentor, veteran Israeli player Shahar Pe’er.

Israeli Fed Cup team mate Pe’er has won six tour titles and been as high as 11th in the rankings with quarter-final showings at both the U.S. Open and Australian Open.

“Me and Shahar are really good friends, which is great to have because she inspires me so much,” Glushko said.

“She is the biggest fighter I know. She would do anything to win, do anything on court to win. I’m on the Fed Cup team since I was 17, so it’s been six years.

“And I saw her coming back from 4-0 in the third set, things that are unbelievable. It inspires me to be next to people like that.”

Glushko is just now tasting success on the WTA Tour after claiming eight singles and eight doubles titles on the ITF circuit.

“I did win five matches,” she said of her time at Flushing Meadows.

“It was great and I beat some really good players and I’m going to be top 100 for the first after these two weeks, so it is exciting.”

The 30-year-old Hantuchova, a winner of six career tour titles whose grand slam resume includes reaching the semi-finals of the Australian Open in 2008, will meet unseeded American Alison Riske for a place in the U.S. Open quarter-finals.