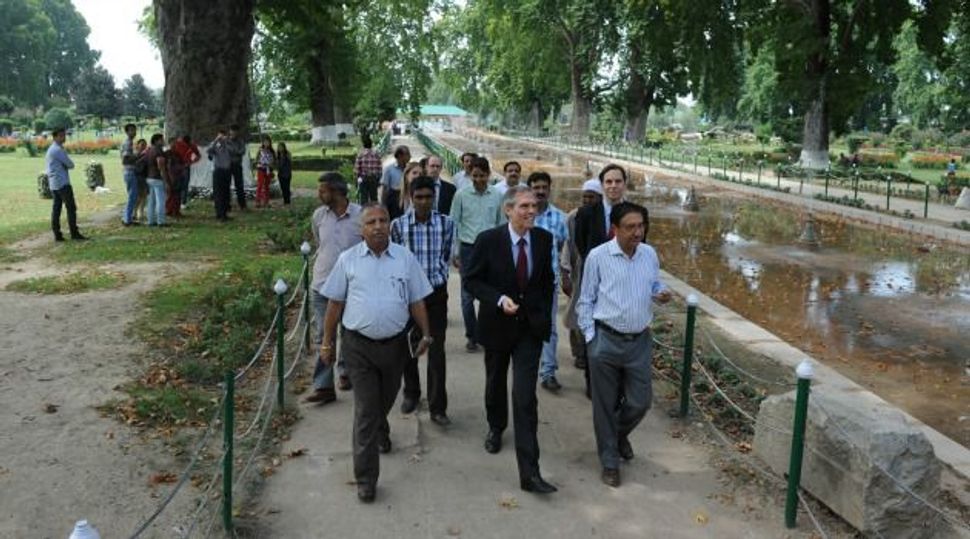 A planned concert by the Bavarian State Orchestra and renowned conductor Zubin Mehta in Indian-controlled Kashmir has angered separatist groups in the disputed Himalayan region, and security forces are mounting a major operation to keep the visitors safe.

The concert, the first of its kind in Kashmir, is expected to attract an audience of 1,500 guests on Saturday, including government ministers and diplomats. It will be held in a Mughal-era terraced garden on the banks of the picturesque Dal Lake in Srinagar, the summer capital of India’s Jammu and Kashmir state.

The event has been organised by Germany’s ambassador to India, Michael Steiner, who told a news conference that the aim of the concert was to “reach the hearts of the Kashmiris with a message of hope and encouragement”.

Kashmir is divided between India and Pakistan. Separatists say that holding the concert on the Indian side effectively legitimises New Delhi’s rule.

It takes place against a backdrop of an upsurge in violence in the Kashmir valley. Militants have staged a number of attacks against Indian security forces in and around Srinagar in recent months. Militants struck an army convoy in June, a day before Indian Prime Minister Manmohan Singh was due to visit the area, killing eight soldiers.

India and Pakistan have fought three wars over Kashmir, one of the most highly militarised regions in the world. Soldiers on the disputed border regularly trade mortar and machinegun fire. About 700,000 Indian troops, paramilitary forces and police are stationed in Jammu and Kashmir state.

Kashmir separatist leader Syed Ali Shah Geelani has called for a general strike in the region on Saturday to protest what he says is Indian occupation of the disputed territory.

“The majority of people here are suffering from state repression. Under these circumstances there is no relevance for a music programme,” he said.

A little-known militant group, which has claimed responsibility for previous attacks, has threatened to attack tourists if the concert goes ahead.

“We will not allow the orchestra of Zubin Mehta to perform in Shalimar Garden. If the German Ambassador remains adamant on holding the event, we will target foreign tourists for which the diplomat shall be responsible,” Sami-ul-Haq, a spokesman for Al Nasireen, Farzandaan-e-Millat and Shuhda (Martyrs’) Brigade, said in a faxed statement to local media.

The Germany embassy was not immediately available for comment.

Inspector-General of police in Kashmir A.G. Mir said security forces were trying to find out if the threat “is for real or some kind of mischief”.

“But adequate security measures are in place for the concert,” he stressed.

As the orchestra plays pieces by Beethoven, Haydn and Tchaikovsky, speedboats will patrol the lake and security forces will set up a security cordon two miles from the event. Only guests with special passes will be able to enter the area after being frisked and scanned by metal detectors.

“It is the biggest ever security exercise for us. Around 1,500-2,000 guests including ambassadors of European countries, central ministers and bureaucrats are arriving here for the concert,” said a senior security official who declined to be named.

The concert will be broadcast live by television channels in India and Europe, the German Embassy said in a statement.

“In the months ahead of the concert, Ambassador Steiner has talked to Kashmiris from all walks of life to make the concert an inclusive event,” it said.

Indian-born Mehta, 77, has conducted thousands of concerts during his long career. He has worked with the Israel, Vienna, and Berlin philharmonic orchestras and was the music director of the New York Philharmonic for 13 years.