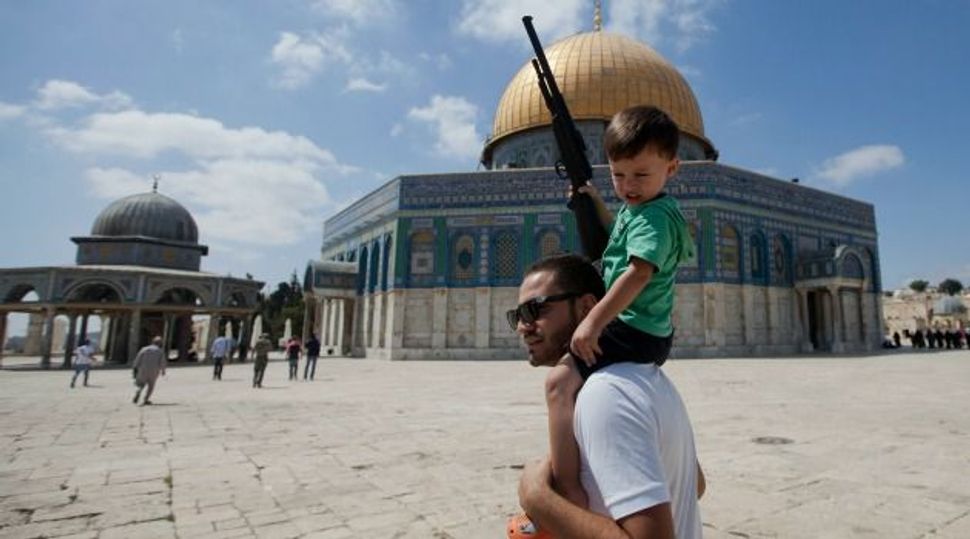 Disputed Place: Palestinian boy holds a toy gun as he rides on his father?s shoulders on the Temple Mount in Jerusalem. Image by getty images

The rabbi of the Western Wall called on the world to condemn riots by Muslims on the Temple Mount during Rosh Hashanah.

Palestinians threw rocks at police and at Jewish worshipers on Friday on the Temple Mount, the holiest site for Jews, following Muslim prayer services at the Al-Aksa Mosque there, as well as at sites in the Old City of Jerusalem. Some 15 rioters were arrested.

“Their goal was to hurt the Jews who came to pray at the Western Wall on Rosh Hashanah,” Rabbi Shmuel Rabinowitz said in a statement issued Saturday night.

“All violence should be condemned, but all the more so when it comes to the holiest place of the Jewish people. The world should condemn this act, and express contempt for this attempt to hurt worshipers on a holy day.”

Rabinowitz pointed out that during the recent Muslim holy month of Ramadan, police and Jewish officials facilitated the Muslim community’s need to worship at the holy site, even though it meant “difficulties for Jewish worshipers at shared holy sites” such as the Western Wall.

The arrests came two days after the arrests of at least seven Palestinians who threw stones at Jewish visitors to the Temple Mount in advance of Rosh Hashanah.