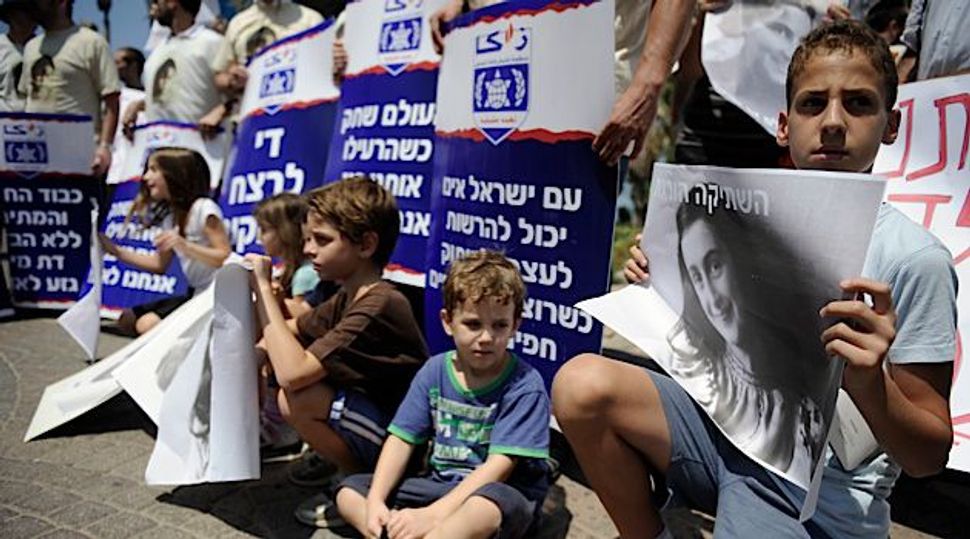 Protesting a Neighbor: Children in Israel gather outside of the Russian embassy in Tel Aviv to protest the use of chemical weapons in Syria. Image by Getty Images

A skeptical Israel saw potential positives in Syria’s acceptance to surrender control of its chemical weapons to Russia, hoping the mooted deal would make Iran think twice about its nuclear project.

Israeli officials had expressed dismay in private about U.S. President Barack Obama’s handling of the Syria crisis, fearful his hesitant response to the use of chemical weapons in Syria would only embolden Iran – the prime protector of Damascus and the focus of Israeli concerns about a potential nuclear threat.

But Syria’s acquiescence to a Russian proposal that it give up its chemical stockpiles in the face of possible U.S. military action was seen as a success by some supporters of Prime Minister Benjamin Netanyahu, albeit with caveats attached.

“The very fact the U.S. was getting ready to act militarily in Syria is positive with regards to the situation in Iran,” said Zalman Shoval, a former Israeli ambassador to Washington and a member of Netanyahu’s right-wing Likud party.

“Confidence in an American commitment that Iran won’t get the bomb has been strengthened,” he said, cautioning that Israel would nonetheless be looking carefully at Syria’s next moves to see if they made good on their pledge to give up poison gas.

Dismissing Tehran’s assertion that its nuclear programme is not intended to produce weapons, Israel views the civil war in neighbouring Syria almost entirely through the prism of Iran.

When Obama accused Syrian government forces of crossing a “red line” last month in using chemical weapons, Israel said some punishment was needed. It feared that inaction would only encourage Tehran to ignore another “red line” – one that Netanyahu himself has set on Iran’s nuclear capabilities.

Obama’s surprise decision to seek backing from a reticent Congress appeared to put a military response in doubt, but the diplomatic solution championed by Russia has reinforced Israel’s view that the mere threat of force carries great weight.

“This would never have happened without the credible threat of American military action,” said another former Israeli ambassador to Washington, Itamar Rabinovich.

Netanyahu has ordered his inner circle of ministers not to speak in public about Syria and officials have ruled out taking part in any eventual U.S. strikes on its neighbour, looking to prevent any catastrophic escalation with its old foe.

Israel launched air strikes on Syria earlier this year which officials said were aimed at disrupting Iranian moves to send arms to Lebanon’s Hezbollah militia. Syria has not retaliated.

Netanyahu’s office declined comment on the latest moves, but one of the prime minister’s closest political allies, former foreign minister Avigdor Lieberman, urged caution, saying it was not clear if Syria’s chemical weapons would ever be removed.

“We have experience, including with the Iranians. A lot of nice proposals are used by regimes to stall, to bide their time, and nothing actually happens,” he told Israel Radio, saying Syrian President Bashar al-Assad was not trustworthy.

To be reassured, Israel would want to see a genuine effort made to eliminate his chemical arsenal, said Giora Eiland, a former Israeli national security adviser.

“If the (Russian) offer only includes supervision of chemical weapons, then we have done very little, but if it also includes real moves to dismantle chemical weapons, that is no small thing,” said Eiland. “For us it is a good result, without our having had to do anything.”

Just as Washington has urged Syria to give up its chemical weapons, so Israel has called on Iran to hand over all its uranium enriched above 3.5 percent, to stop further enrichment and close its underground nuclear facility at Fordow – a site Israel says is meant to enrich the metal to weapons grade.

Iran, which says it wants nuclear power not warheads, has rejected the demand and has resisted increasingly stringent international sanctions designed to make it back down.

Energy Minister Silvan Shalom said on Tuesday Israel saw it as vital that Iran see Syria quickly forced to give up chemical weapons or, if it did not, suffering U.S.-led attacks:

“Because if there is no response on Syria,” Shalom said, “There certainly won’t be any response on Iran.”