Hamas Leaders in Gaza Seek To Lower Tension With Egypt 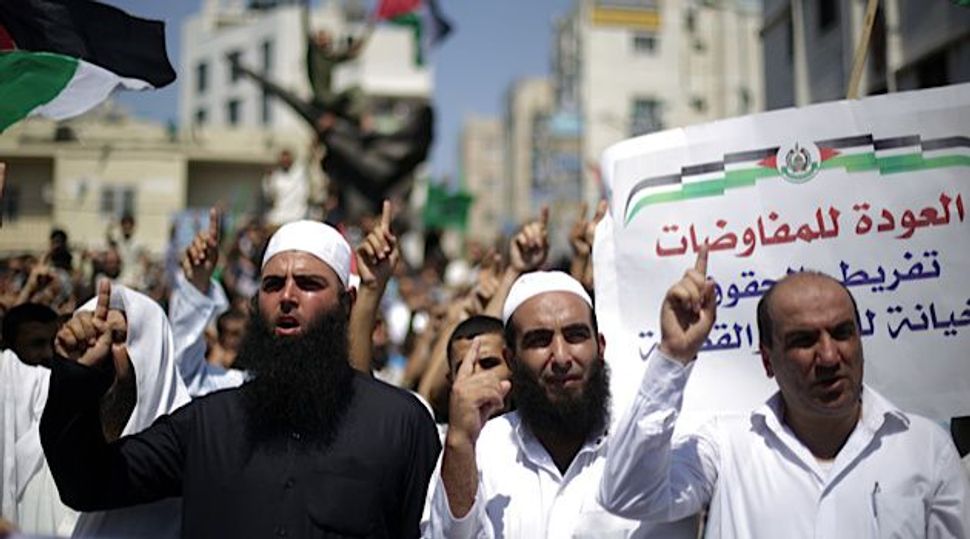 The Hamas Islamist group ruling Gaza sought to ease tensions with Cairo on Wednesday by ordering Muslim preachers to mute their criticism of the Egyptian government over what some of the clerics have called its war on Islam.

“Preachers should avoid speaking of the internal affairs of Egypt and focus on our Palestinian national issues and our struggle for the liberation of our land and the freedom of our prisoners (held by Israel),” said Ismail Rudwan, the Hamas-appointed religious affairs minister in Gaza.

He told Reuters he delivered that message in meetings he had held with scores of preachers in mosques in the southern Gaza Strip and planned to see more clerics in other parts of the Palestinian territory.

Events in neighbouring Egypt have resonated strongly in the Gaza Strip. Hamas is an offshoot of Egypt’s Muslim Brotherhood. Brotherhood figure Mohamed Mursi was overthrown as president by the military in July following mass protests.

Efforts by the army-backed government in Egypt to crush the Brotherhood and its closure of cross-border smuggling tunnels used to move weapons and goods into the Gaza Strip have dealt a major blow to Hamas.

Hamas denies such allegations, and Rudwan said it regards Egypt as a “strategic supporter of the Palestinian cause”. The group, spurned by the West over its refusal to recognise Israel and renounce violence, won a Palestinian election in 2006 and seized control of Gaza in 2007 from forces loyal to Palestinian President Mahmoud Abbas.

Egypt also has been angered by Gaza street rallies in which Hamas fighters have flashed a four-finger salute – a show of support for Mursi.

His ousting was seen as a setback for Hamas, especially as the group’s ties with traditional allies Iran and the Lebanese Hezbollah party have also suffered over its siding with rebels battling Syrian President Bashar al-Assad.

In a television interview with an Egyptian channel, Moussa Abu Marzouk, a senior Hamas official who lives in Cairo, voiced his respect for Egypt’s military and described the Hamas men’s gesture at the protests as a mistake.

But there has been no sign of any easing of Egypt’s border crackdown in which tunnel closures have caused fuel shortages that have forced Gaza taxi drivers to buy Israeli-imported petrol and diesel at double the Egyptian price.

Egyptian authorities also have imposed tight restrictions at the Rafah border terminal, Gaza’s main window to the world, limiting to 250 the number of Palestinians allowed to cross daily into Egypt. Some 1,200 people a day used to pass through before Mursi’s removal.

Hamas says some 5,000 people, including students planning to study in Cairo and beyond and patients seeking treatment in Egypt, are stuck in Gaza awaiting permission to cross.

Gaza, home to 1.7 million Palestinians, is also under an Israeli blockade. In 2010, Israel began easing its economic restrictions and allowing more products into the territory through its border crossing.

Hamas Leaders in Gaza Seek To Lower Tension With Egypt