Kerry and Netanyahu Meet in Israel To Discuss Syria 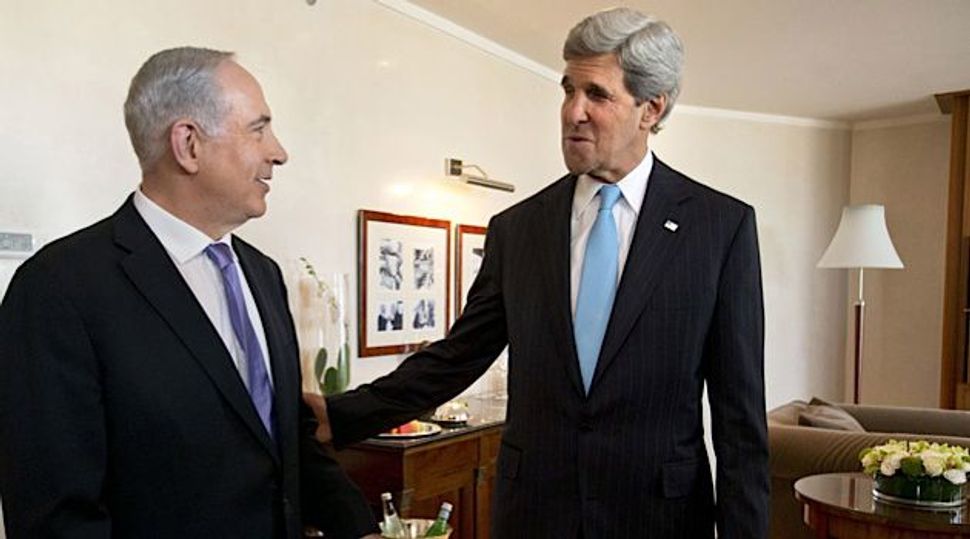 U.S. Secretary of State John Kerry briefed Prime Minister Benjamin Netanyahu on Sunday on a U.S.-Russian deal to remove Syria’s chemical weapons, an accord that drew a guarded response from the Israeli leader.

Netanyahu, in a speech before the meeting, said the agreement would be judged on whether it achieved “the complete destruction” of the Syrian government’s chemical weapons stockpiles, and he pointed toward Iran’s nuclear programme as another test of world resolve.

The deal that Kerry reached with Russian Foreign Minister Sergei Lavrov in Geneva on Saturday called for Syrian President Bashar al-Assad to account for his chemical arsenal within a week and let international inspectors eliminate it all by the middle of 2014.

Israel has largely stayed on the sidelines of Syria’s civil war, a two-and-a-half-year conflict that has killed more than 100,000 people and pits the Iranian-allied Assad government against rebels who include Islamist militants deeply hostile toward the Jewish state.

Kerry and Netanyahu convened at the prime minister’s office in Jerusalem to discuss the agreement and U.S.-brokered peace talks between Israel and the Palestinians, which have shown little sign of progress.

Israeli officials had expressed dismay in private about U.S. President Barack Obama’s handling of the Syria crisis, fearful possible failure to follow through with threatened military action would embolden Iran.

In his speech, Netanyahu drew an analogy between the Syria deal and international efforts to prevent a nuclear-armed Iran.

“Here, too, the determining factors will be actions and results – not words,” said Netanyahu.

“In any case, Israel must be poised and ready to defend itself, by itself, against any threat – and this capability and readiness are more important now than ever,” he said.

Netanyahu has repeatedly hinted at the possibility of Israeli military strikes on Iran should Western sanctions and diplomacy fail, and has called on Tehran to hand over all its uranium enriched above 3.5 percent and to stop any further purification of the metal toward possible weapons-grade level.

Iran says its nuclear work is for peaceful purposes only.

Israeli Strategic Affairs Minister Yuval Steinitz, who is close to Netanyahu, said the deal on Syria had “disadvantages and advantages”.

“On the one hand, it lacks the necessary speed (in removing chemical arms from Syria). On the other hand, it is much more comprehensive, as it includes a Syrian commitment to dismantle the manufacturing facilities and to never again produce (chemical weapons),” Steinitz told Army Radio.

The United States blames the Syrian government for an Aug. 21 poison gas attack in the Damascus suburbs that killed some 1,400 people. Assad denies the allegation.

Also on Army Radio, Avigdor Lieberman, chairman of parliament’s Foreign Affairs and Defence Committee, said intelligence that Israel has gathered on neighbouring Syria could help verify Assad’s compliance with the accord.

“We will understand Assad’s intentions only in a week when he is meant to hand over a full list of all the chemical weapons at his disposal, and I think Israel has a not bad idea of what chemical weapons he has,” Lieberman said.

On Wednesday, Netanyahu said Assad must be stripped of his chemical arsenal and that the outcome of the Syrian crisis would resonate loudly in Iran.

And, on Sunday, Steinitz said, “I don’t know how the Iranians are reading the deal, because it is also problematic as far as they are concerned. Here is their ally, Assad, forced to give up his chemical weapons.”

Kerry and Netanyahu Meet in Israel To Discuss Syria