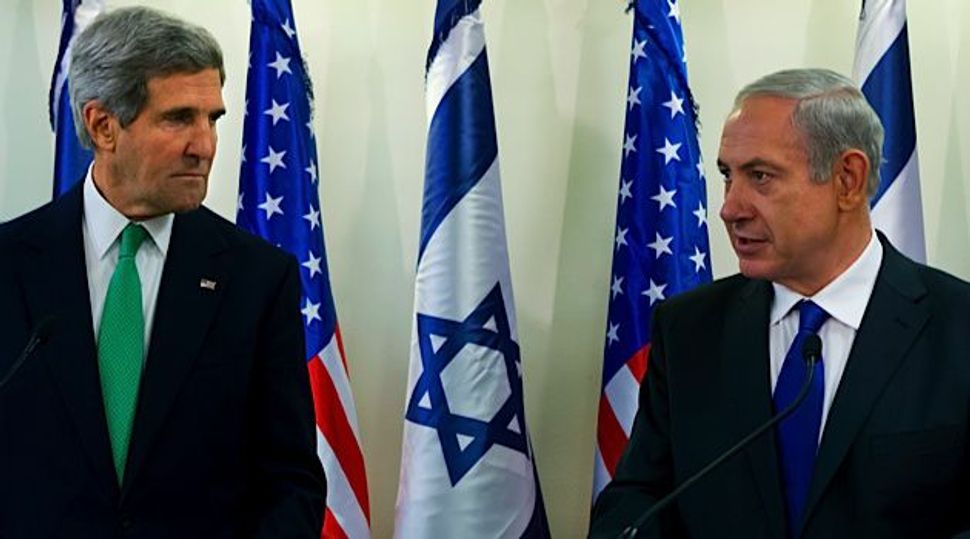 U.S. Secretary of State John Kerry assured Israel on Sunday a U.S.-Russian deal to remove Syria’s chemical weapons would be effective, addressing concern that a lack of resolve would embolden Iran in its nuclear drive.

“We cannot have hollow words in the conduct of international affairs, because that affects all other issues, whether Iran or North Korea or others,” Kerry said after talks with Israeli Prime Minister Benjamin Netanyahu.

Kerry briefed Netanyahu on what he called “the most far-reaching chemical weapons removal ever”, after the Israeli leader said the deal would be judged on whether it achieved the arsenal’s “complete destruction”.

Israeli officials had privately expressed dismay about U.S. President Barack Obama’s handling of the Syria crisis, fearful that any failure to follow through with threatened military action would encourage Iran to press on with its nuclear work.

“The Syrian regime must be stripped of all its chemical weapons, and that would make our entire region a lot safer,” Netanyahu said after his talks with Kerry.

Standing alongside Netanyahu, Kerry said the framework agreement he reached with Russian Foreign Minister Sergei Lavrov in Geneva on Saturday “has the full ability … to strip all of the chemical weapons from Syria”.

Kerry reiterated that the military option remained should Syrian President Bashar al-Assad fail to comply with the deal.

The accord called for Assad to account for his chemical arsenal within a week and let international inspectors eliminate it all by the middle of 2014.

“The egregious use of chemical weapons by the Assad regime against innocent men, women, children, their own citizens, all indiscriminately murdered in the dead of night is unacceptable,” Kerry said, referring to an Aug. 21 attack that Washington says killed more than 1,400 people.

“And we have said in no uncertain terms that this should never happen again. This country (Israel) understands the words ‘never again’ perhaps more than any other,” he said, a reference to the Nazi Holocaust in which six million Jews were killed, many of them in gas chambers.

Israel has largely stayed on the sidelines of Syria’s civil war, a two-and-a-half-year conflict that has killed more than 100,000 people and pits the Iranian-allied Assad government against rebels who include Islamist militants deeply hostile to the Jewish state.

Netanyahu reiterated his call for a “credible military threat” to back up sanctions and diplomatic efforts aimed at curbing Iran’s nuclear programme. Iran says its nuclear work is entirely peaceful.

In an interview on ABC’s “This Week with George Stephanopolous” aired on Sunday, Obama defended his handling of the Syrian crisis.

Obama also said he and new Iranian President Hassan Rouhani had exchanged letters about the Syrian situation and that Tehran understood that a potential nuclear-armed Iran “is a far larger issue” for the United States.

“In any case, Israel must be poised and ready to defend itself, by itself, against any threat – and this capability and readiness are more important now than ever,” he said.

Netanyahu has called on Tehran to hand over all its uranium enriched above 3.5 percent and to stop any further purification toward possible weapons-grade level. Israel is widely assumed to have the Middle East’s only nuclear arsenal.