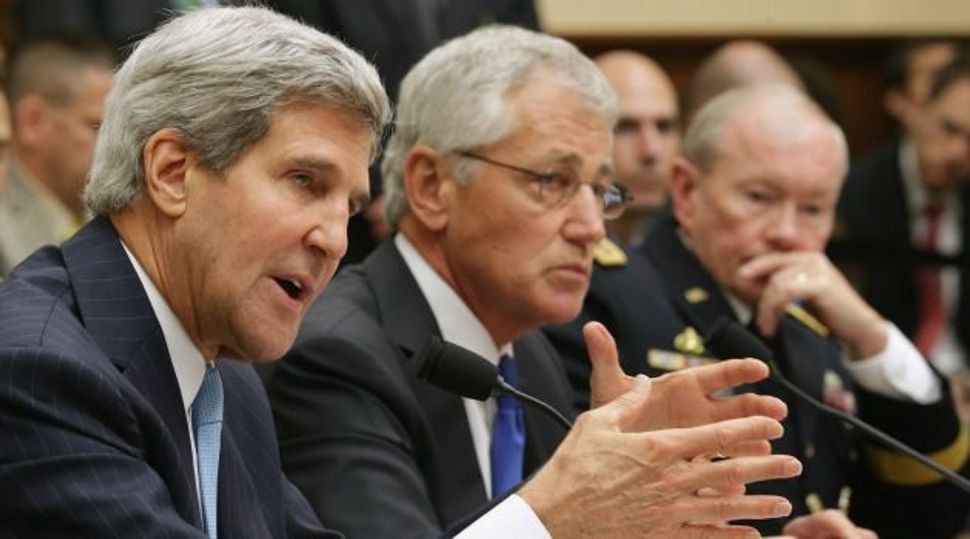 (JTA) — Pro-Israel groups suspended their high-profile lobbying effort for a strike on Syria now that the United States and Russia have struck a deal to strip the Assad regime of its chemical weapons.

A spokesman for the American Israel Public Affairs Committee, which organized a Capitol Hill blitz last week aimed at persuading Congress to back a strike, confirmed Monday that lobbying has been suspended for now.

The American Jewish Committee and the Jewish Council for Public Affairs, which also had been involved in the lobbying, said they would suspend lobbying, too.

“We sent many messages over the last week and a half; we are not formulating new letters to the Hill,” Jason Isaacson, the AJC’s director of international affairs, told JTA. “Our message is out there should it be required.”

Jewish groups had hesitated at first to sign on to the lobbying effort, fearful that their support would be construed as a pro-Israel initiative. But they dove in after President Obama called for a strike last month and senior administration officials solicited their help in persuading Congress to sign off on the military action.

AIPAC sent 250 of its members for personal meetings with Capitol Hill lawmakers, a show of strength the lobby reserves for major initiatives. The group kept up its effort even after Obama called last week for Congress to delay a vote while he explored the Russian proposal for international monitors to take over and destroy Syria’s arsenal of chemical weapons.

The AJC in a letter Sept. 12 to Congress members said the threat of credible military action must be maintained even as the United States looked at the Russian plan. Leading pro-Israel figures echoed the view.

“Every day that goes by without congressional authorization, it undermines the vitality of the threat,” Abraham Foxman, the Anti-Defamation League’s national director, said in an interview Friday.

By Monday, however, the groups had changed their tune, suspended their lobbying and endorsed the putative deal brokered in Geneva over the weekend by U.S. Secretary of State John Kerry and his Russian counterpart, Sergei Lavrov.

Under the terms of the agreement, Syria would be stripped of its chemical weapons by the middle of 2014. If it refuses to comply, the situation would be referred to the U.N. Security Council.

Syrian President Bashar Assad’s regime has yet to formally give its assent to the deal, though government officials have indicated a willingness to approve it.

“While we remain cautious about President Assad’s true commitment to disarmament, we welcome this agreement as an ambitious but hopeful first step to eliminate chemical weapons in Syria,” the ADL said in a statement Monday.

Martin Raffel, the senior vice president of the Jewish Council for Public Affairs, which had advocated for a strike, said his group would now “take its lead from the administration.”

The flurry of activity followed an attack on Aug. 21 in which a rebel stronghold near Damascus was hit with chemical weapons that are believed to have killed more than 1,400 people, including hundreds of children.

Russian President Vladimir Putin has said the attack was likely perpetrated by opposition forces, but the United States maintains it was almost certainly launched by Assad.

After sealing the deal with Lavrov in Geneva, Kerry flew to Israel, where he appeared at a joint news conference Sunday with Israeli Prime Minister Benjamin Netanyahu.

Netanyahu cast Israel’s investment in the deal in the same terms that pro-Israel groups had framed their support last week for strike authorization: as a message to Iran.

“What the past few days have shown is something that I have been saying for quite some time – that if diplomacy has any chance to work, it must be coupled with a credible military threat,” Netanyahu said. “What is true of Syria is true of Iran and, by the way, vice versa.”