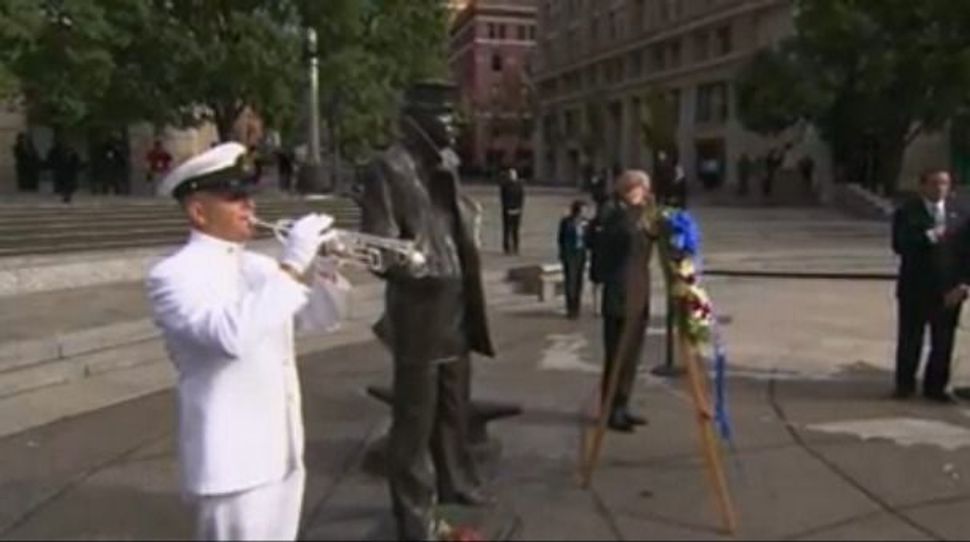 Jewish Past: The ?Lone Sailor? statue used for the memorial service to honor the 12 victims of the Navy Yard shooting was created by Jewish sculptor Stanley Bleifeld.

A memorial service was held Tuesday morning at the U.S. Navy Memorial in honor of the victims of Monday’s shooting at the Washington Navy Yard, ABC7 News reported.

Defense Secretary Chuck Hagel, D.C. Mayor Vincent Gray and other senior Department of Defense Officials laid a wreath in front of “The Lone Sailor,” the statue created for the memorial by Jewish sculptor Stanley Bleifeld in 1987.

Bleifeld, who served in the Navy during World War II, created four sculptures for the Navy Memorial (including the famed “Homecomeing”). Other famous works include the Knights of Columbus Memorial in Connecticut, and “The Baseball Players” at the Baseball Hall of Fame in Cooperstown, N.Y. He died in 2011.

Flags will fly at half-staff across the nation through Friday night in memory of the 12 victims of Monday’s shooting.

“This is a tragic day for the Department of Defense, the national capital area, and the nation,” Hagel said in a statement Monday.