Jewish Underdog Shocks Putin in Race for Mayor of Russia’s No. 4 City 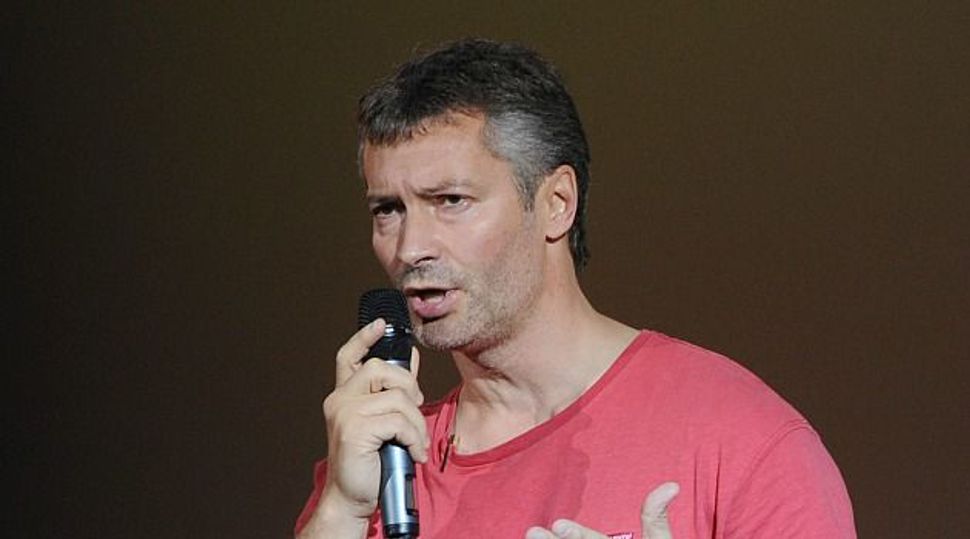 He has published poetry, sat in a Soviet prison, collected Russian religious icons and treated drug addicts with a tough programme that has drawn praise but also criminal prosecution.

Now Yevgeny Roizman is about to begin his latest incarnation, as mayor of Russia’s fourth-largest city – one of the highest posts to be held by an opposition politician since President Vladimir Putin came to power in 2000.

Roizman, 50, beat the ruling United Russia party candidate in a mayoral election on in Yekaterinburg, a city of 1.4 million in the industrial belt of the Ural Mountains which is a venue in the 2018 World Cup soccer finals.

His victory sent a powerful signal: Kremlin favourites can be defeated, even where Putin’s political base is strong.

“Thank you, Yekaterinburg!” Roizman declared after his victory in the city where late President Boris Yeltsin was once the regional Communist Party leader and where the last Russian tsar was killed by Bolshevik revolutionaries in 1918.

United Russia, Putin’s main instrument of power in electoral politics for a decade, won the vast majority of the 7,000 local elections held across the country on Sunday.

But Roizman’s win, along with a strong second-place showing for opposition leader Alexei Navalny in Moscow, could give hope to Russians who want change but saw a protest movement fade last year after Putin’s election to a third term.

Roizman is not as radical in his opposition as Navalny, who has led anti-Putin protests, dubbed United Russia the “party of swindlers and thieves” and says the five-year prison sentence he faces for theft is Putin’s punishment for his activism.

A member of parliament from 2003 to 2007, Roizman ran as a candidate for Civic Platform, a pro-business party led by tycoon Mikhail Prokhorov, the owner of U.S. basketball team the Brooklyn Nets.

United Russia’s mayoral candidate was Yakov Silin, 52, a career bureaucrat and deputy governor of the region whose image was plastered on billboards throughout the city and who courted elderly voters with “pensioners’ day” price cuts in local shops and museums in late August.

Roizman countered with a grassroots campaign that included door-to-door visits and feelgood events like a Saturday fun-run.

Roizman won 33.3 percent of the vote, ahead of Silin on 29.7 percent, suggesting that the Internet and street politics could counter the sway of state media.

“I’ll vote for Roizman because I don’t want to vote for Silin, whom they are doing their best to drag into the mayor’s office,” homemaker Yelena Ivanova, 42, said before the election. “The rest of the candidates are grey and drab.”

Yekaterina Makarova, a 26-year-old IT company employee, took issue with fulsome praise for Silin in campaign leaflets and newspapers she found stacked outside her door before the vote.

“It turns out he is our everything – our life, the stars, the sky,” she said. “It’s very intrusive and unpleasant.”

Navalny, who used his blog to urge voters in Yekaterinburg to back Roizman, told a rally in Moscow on Monday that a new political reality was emerging.

Roizman, whose T-shirts and salt-and-pepper stubble give him the look of an ageing hipster, has a colourful history.

He was jailed in the Soviet era on robbery, extortion and weapons charges that were later voided, and has been accused of connections in the 1990s with an local organised crime gang.

More than a decade ago he founded City Without Drugs, whose vigilante-style raids on alleged peddlers and tough-love rehabilitation centres for addicts turned him into a local celebrity but also drew criminal investigations.

Last year, the foundation’sformer vice president was charged in absentia of false imprisonment for allegedly detaining six female patients against their will.

Roizman’s opponents tried to capitalise on his chequered past. One poster put up around Yekaterinburg showed a frightened little girl saying: “Mama! Don’t vote for the bandit!”

“Drug dealer, not drug fighter,” a newspaper headline during the campaign read.

Roizman complained of being excluded from local media and denied access to sites were he planned campaign events, but said the Kremlin had made one crucial oversight.

“They could have kept me out, but they let me run in this election,” he told the newspaper Izvestia. “And I won.”

Observers say Roizman’s power as mayor will be limited because a “city manager” appointed by the local parliament has controlled much of the business of the provincial capital, 2,000 km (1,240 miles) east of Moscow, since 2010.

One regional government official, who spoke on condition of anonymity before the vote, voiced fear that Moscow would take revenge for a win by Roizman by withholding funds earmarked to ready the city for hosting the World Cup.

“If the right person doesn’t become mayor, of course there is a threat that the federal authorities will withhold financing for the preparations for the championship,” the official said.

The Russian government denies using federal subsidies to encourage loyalty to Putin’s party. But a report by the Moscow-based Higher School of Economics this year showed regions where United Russia led in the 2011 parliamentary election received bigger handouts from Moscow.

Jewish Underdog Shocks Putin in Race for Mayor of Russia’s No. 4 City