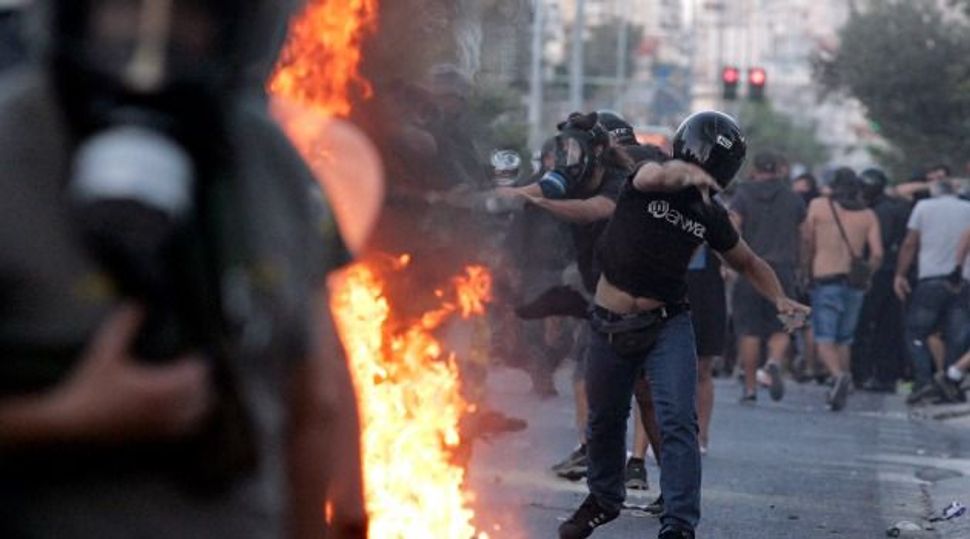 Greek police searched the offices of the Golden Dawn party on Wednesday after an anti-racism rapper was stabbed to death by a man who sympathised with the far-right group.

The killing touched a nerve in Greece, where an economic crisis has worsened social tensions, and rallies in several cities to mark the death turned violent.

A 45-year-old man was arrested and admitted to the killing, police said. Greece’s citizen protection minister said the suspect was a Golden Dawn sympathiser.

Pavlos Fissas, 35, who went by the stage name Killah P, was stabbed twice in the heart and chest on Tuesday night in a brawl after a soccer match shown in a cafe in Keratsini, a working-class suburb of Athens.

Police said the offices of a political party were searched for evidence linking it to the attack, but stopped short of naming Golden Dawn. They later arrested a Golden Dawn official for a weapons offence after finding a police-style night-stick in the party’s offices in Piraeus.

More than 5,000 people rallied in Athens on the spot where Fissas was stabbed. Police fired teargas at protesters who hurled stones and petrol bombs at a police station and set garbage containers on fire, Reuters witnesses said.

“The government of (Prime Minister Antonis) Samaras is the instigator by allowing murderous Golden Dawners to roam around unpunished and armed with knives,” said KEERFA, the United Movement Against Racism and the Fascist Threat.

“It’s time to punish the neo-Nazi murderers of Golden Dawn and to throw the Samaras government – a miserable gang of bankers, the troika (of international lenders) and neo-Nazis – into the trash.”

The leader of the right-wing Independent Greeks party, Panos Kamenos, who visited the scene of the crime to pay his respects was attacked and lightly injured by a group of protesters.

Clashes between police and demonstrators were reported in two other Greek cities, Patras and Thessaloniki.

The killing of Fissas has revived calls to ban Golden Dawn, Greece’s third most popular party according to recent opinion polls, which denies constant accusations of involvement in a wave of attacks on immigrants and leftists.

With an emblem resembling a swastika, the party rose from obscurity to enter parliament last year. Its leaders have denied the Holocaust and defended Greece’s 1967-1974 military junta.

Golden Dawn is a “criminal organisation” that should be declared illegal, the co-ruling Socialist PASOK party said.

The far-right party has condemned the killing and denied accusations by “wretched sycophants” of any involvement.

“(The accusers) are miserable and wretched not only because of their brazen lies and slander but because they are exploiting a tragic event for politicking, to win votes and to divide Greek society,” Golden Dawn said in a statement.

The government plans to sharpen the law defining what a criminal organisation is, said Citizen Protection Minister Nikos Dendias.

“The abominable murder in Keratsini by an attacker sympathising with Golden Dawn, according to his own statement, illustrates, in the clearest way, the intentions of neo-Nazism,” Dendias said.