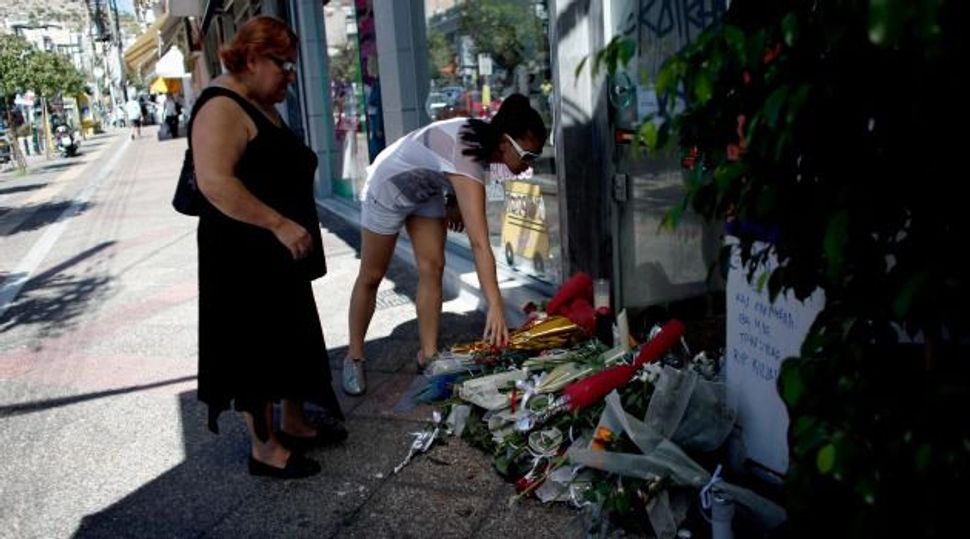 The Greek government asked judges on Thursday to move against Golden Dawn, saying it had evidence the far-right party was a criminal organisation and a threat to public safety.

The move comes two days after a self-proclaimed sympathiser of the party, Greece’s third-most popular, admitted stabbing to death 34-year-old Greek rapper Pavlos Fissas, who was buried on Thursday.

The seemingly politically motivated killing of Fissas, who performed anti-racist raps as Killah P, touched a nerve in Greece, where economic hardship has divided society, and rallies in several cities to mark his death turned violent on Wednesday.

Citizen Protection Minister Nikos Dendias said in a publicly released letter to the country’s top civilian court that the authorities had evidence that members of Golden Dawn were involved in a string of attacks over the past two years and asked prosecutors to take up the case.

“This activity goes beyond isolated events … it undermines the authority of law, infringes on human rights and human dignity, endangers public order and the security of the country,” Dendias wrote.

Authorities have received reports or were investigating 32 cases of violent attacks by members, officials at the ministry told reporters on condition of anonymity. The cases included four knife attacks on immigrants, one of which was fatal.

Rights’ groups have long accused the party of being linked to attacks on immigrants but this is the first time it would be investigated by a court, if it decides to take up the case.

Greek police raided the party’s Athens headquarters to look for evidence for the first time on Wednesday.

Greece’s coalition partners have quarreled for months over whether to ban Golden Dawn, which rose from obscurity to win 18 out of 300 seats in parliament last year, on a fiercely anti-immigrant and anti-corruption agenda.

Several lawmakers have openly opposed a ban, saying it would boost its appeal and turn its members into martyrs.

A step-by-step approach, beginning with the prosecution of individual members would be a more adequate way to deal with the party, government spokesman Simos Kedikoglou said on Thursday. “A simple ban will not do,” he told Greek radio.

In a tense atmosphere in an Athens cemetery, more than 2,000 mourners bid farewell to Fissas on Thursday.

“Pigs! Fascists! Murderers!” mourners chanted as relatives carried Fissas’s white coffin into a graveyard on a hill overlooking the working-class Keratsini suburb were he was stabbed. As others sang his songs, one man shouted: “Immortal!”

Fissas was stabbed twice in the heart and chest on Tuesday night in a brawl after a soccer match shown in a cafe, having been ambushed by unknown assailants.

A self-proclaimed supporter of Golden Dawn confessed to the killing. The 45-year-old, who has been pictured in Greek media with his arm around a Golden Dawn lawmaker, was due to appear before a prosecutor on Saturday.

The party, whose emblem resembles a swastika, condemned the killing and denied involvement. It said those who accused the party were spreading “wretched calumnies” to win votes.

Its members have been seen giving Nazi-style salutes but the party rejects the neo-Nazi label.

“This is a witch hunt against Golden Dawn nationalists … their dirty plans won’t succeed,” the party’s leader Nikos Mihaloliakos, who has openly denied the Holocaust, said in a video posted on the party’s website on Thursday.

Prime Minister Antonis Samaras on Thursday called for calm during what he said was an “extremely critical time” for Greece.

“This government is determined to not allow descendents of Nazis to poison society, to commit crimes, to terrorise and to undermine the foundations of a country that gave birth to democracy,” Samaras said in a televised address to the nation.

Several rallies by anti-establishment groups and unions, which turned a 48-hour anti-austerity strike that began on Wednesday into a protest over his killing, were under way late on Thursday.

Greece, the epicentre of the euro zone debt crisis, has been hit hard by years of deep recession brought on by tough austerity required by international lenders. On Athens’ streets, talk was of Golden Dawn and austerity.

“I hope the people who voted for them will wake up because now their own kids are in danger,” said a 49-year-old resident who gave her name as Katerina.

About 2,000 people gathered to protest at the killing in the working class Athens suburb of Nikaia late on Thursday, waving flags and banners reading: “We won’t tolerate fascism”.