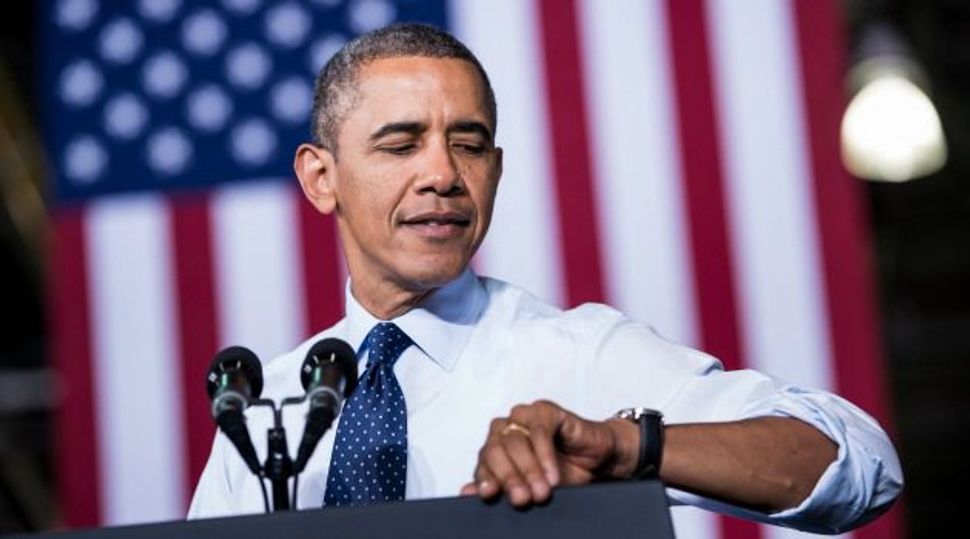 Even as it crafts a response to overtures from Iranian President Hassan Rouhani, the Obama administration is working to reassure Israeli officials there will be no easing of sanctions on Tehran unless it first takes tangible steps to limit its nuclear program, U.S. and diplomatic sources said.

Private discussions taking place at various levels both in Washington and Israel appear intended to calm Israelis’ fears that the United States is moving prematurely toward rapprochement with Iran at a time when they are already questioning U.S. resolve to keep open the threat of military action.

But judging from the latest public comments from senior Israeli officials, the White House faces an uphill struggle to overcome those misgivings.

The outreach to close U.S. ally Israel comes as Rouhani, who has issued a barrage of favorable gestures toward the United States, prepares to travel to New York for his debut address at the United Nations on Tuesday and the tantalizing possibility of meeting President Barack Obama face-to-face.

In public comments, Obama and his aides have been cautious not to embrace Rouhani without reservations. But they have made clear that they are ready to test his intentions to seek a diplomatic solution to Iran’s long-running nuclear dispute with the West.

“We’re going to make judgments based on the actions of the Iranian government, not simply their words,” White House deputy national security adviser Ben Rhodes told reporters on Friday, previewing the speech Obama will deliver before the U.N. General Assembly just hours before Rouhani takes to the world stage.

Rhodes reiterated that Obama, who has exchanged letters with Rouhani, had no meeting scheduled with his Iranian counterpart, who has struck a dramatically different tone than his stridently anti-U.S. predecessor, Mahmoud Ahmadinejad.

But the White House has left open the possibility they could still meet on the U.N. sidelines, and a U.S. official has privately acknowledged the administration’s desire to engineer a handshake between the two leaders, which would be the highest-level U.S.-Iranian contact since the 1979 Islamic Revolution.

Such a meeting likely would not go down well with Israel, where some officials have expressed dismay about how Obama’s handling of the Syria crisis might affect the Iranian standoff. They fear that his failure to follow through with threatened military strikes in Syria could encourage Iran to press on with its nuclear work.

The United States and Israel accuse Iran of seeking to develop a nuclear weapons capability. Iran says its program is entirely peaceful and for power generation purposes.

The U.S.-Israeli consultations, which were first reported on the New York Times website late on Friday, are expected to intensify as both sides lay the groundwork for a Sept. 30 Oval Office meeting between Obama and Israeli Prime Minister Benjamin Netanyahu, a U.S. official said.

OUTREACH BOTH PUBLIC AND PRIVATE

As part of a public outreach parallel to the private contacts, the U.S. ambassador to Israel, Dan Shapiro, told the Israeli newspaper Ma’ariv that Washington recognized that a nuclear-armed Iran would be “much more dangerous” than Syria’s chemical weapons.

Despite that, Israeli Strategic Affairs Minister Yuval Steinitz told another Israeli newspaper “there is no more time” for negotiations between Iran and world powers and warned that Tehran was on course to develop a nuclear bomb within six months.

That followed a statement from Netanyahu’s office on Thursday that Rouhani’s pledge in a U.S. television interview that Iran would never develop a nuclear weapon amounted to “fraudulent words” that should fool no one.

On Friday, Rhodes sought to placate Israeli concerns, saying there was “not an open-ended window for diplomacy” with Rouhani, a relative moderate who took office in August.

But Rhodes insisted there was still “time and space” for a peaceful resolution, possibly a veiled message to Israel against any kind of go-it-alone military action to target Iran’s nuclear sites as threatened in the past.

Oren echoed White House assertions that it was the threat of U.S. military action that drove Syrian President Bashar al-Assad to agree to get rid of his chemical weapons stockpile, and insisted in an interview that “the American military threat to Iran has to be endowed with that same credibility.”

Elliott Abrams, a Middle East adviser under Republican former President George W. Bush, said Obama had undercut his leverage with Iran by striking a deal with Russia on Syria’s chemical weapons rather than launching the military strike that he appeared poised to order in late August.

“What happened with regards to Syria (suggests) that the Americans don’t want any kind of military engagement, so all options are not on the table with regards to Iran,” said Abrams, now at the Council on Foreign Relations think-tank. “This makes an Israeli strike more likely. They may think the U.S. is out of the game.”

But some other analysts believe the chances of a unilateral Israeli strike have diminished significantly, not just because Rouhani’s overtures have raised hopes internationally for a negotiated end to the impasse. Netanyahu also has little support from the Israeli public for a go-it-alone approach.