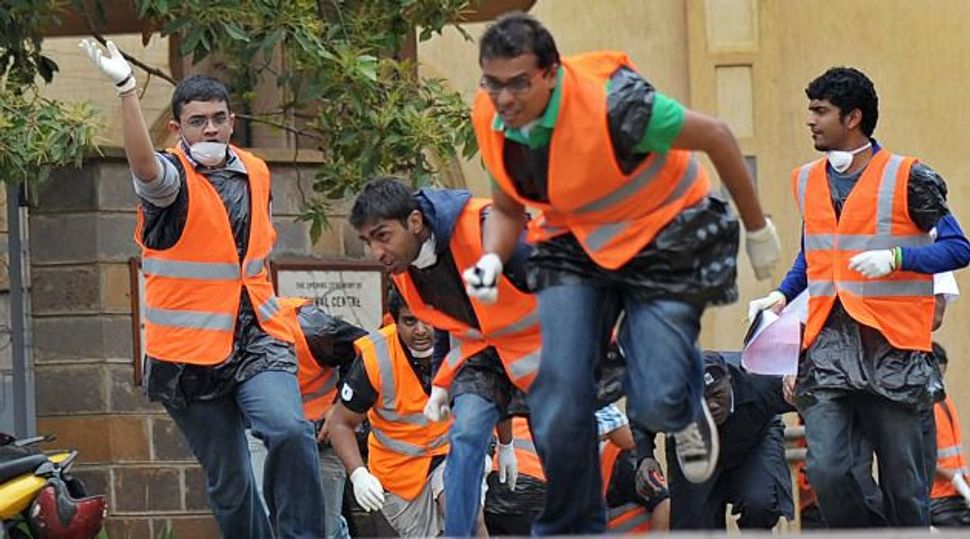 “Israel empathizes with the Kenyan people’s pain and with your own personal loss due to the terror attack. We value your nation’s determined struggle against terrorism,” Netanyahu said in a phone conversation on Monday night, according to his office.

The call came as security forces at the upscale Westgate mall worked to secure the area, free hostages and apprehend the terrorists.

At least 62 people are known killed in the attack and siege which began on Saturday afternoon, though the death toll could rise once the siege is completely over.

An explosion and gunfire were heard in the mall at about 6:30 a.m. Tuesday, the Associated Press reported, despite Kenyan government reports that the crisis was over.

Kenya’s Foreign Minister Amina Mohamed said that two to three Americans and a British citizen of Arab origin were among the gunmen.

The French news agency AFP reported that Israel agents were involved in the rescue operations, something that was neither confirmed nor denied by Israeli officials.

One Israeli was injured and three others escaped harm, according to Israel’s Ministry of Foreign Affairs. Several Americans also were injured.

Militants from al Shabab, a Somalia-based terror group linked to al-Qaida, claimed responsibility for the attack. Al Shabab said the attack was revenge for Kenya’s military operations in Somalia that began nearly two years ago.

Somalia’s al Shabaab Islamist group said on Tuesday there were “countless dead bodies” in a Kenyan shopping mall as security forces searched for militants still holed up in the complex after a weekend attack that authorities say killed 62 people.

The al Qaeda-linked attackers are believed by Western sources to include Americans and possibly a British woman who may be the widow of a suicide bomber who took part in an attack in London in 2005. Al Shabaab in Somalia rejected suggestions that foreigners were involved.

A burst of gunfire in the early morning broke hours of calm on the fourth day since the militants stormed into the Westgate centre in Nairobi during a busy Saturday lunchtime, spraying bullets and lobbing grenades.

Helicopters buzzed over the complex, which is popular with foreigners and prosperous Kenyans. Al Shabaab says it launched the attack in pursuit of demands that Kenya withdraw troops from Somalia, where they have battled the Islamist group. President Uhuru Kenyatta has vowed to stay the course there.

The attack has come at a time when several violent Islamist groups from Mali to Algeria, Nigeria to Kenya – tapping into local grievances but all espousing an anti-Western, anti-Christian creed – are striking at state authority and international interests.

“There are still gunmen in the building,” said an intelligence officer, who asked not to be named, speaking in the morning near the mall, which is surrounded by troops. Asked if there were still hostages, he said: “We are not sure yet.”

Al Shabaab said its militants were still holding out in the Westgate centre and hostages they were holding were still alive.

“There are countless number of dead bodies still scattered inside the mall, and the Mujahideen (fighters) are still holding their ground #Westgate,” the group said on its Twitter feed.

“The hostages who were being held by the Mujahideen inside #Westgate are still alive, looking quite disconcerted but, nevertheless, alive.”

It described its fighters as “unruffled and strolling around the mall in such sangfroid manner”.

The Kenyan military said its forces were carrying out “mop up operations” in the building.

The Interior Ministry earlier said security forces were in control of the mall and that all the hostages had been released.

A trickle of survivors left on Monday, but the fate of those still missing was unclear. It was also unclear how many of the militants had been killed or captured.

The government said on Monday three had died and a television report on Tuesday said “six of the remaining attackers” were killed. There has been no clear official tally.

Images from closed-circuit television inside the mall during the attack, published in a Kenyan newspaper on Tuesday, showed two militants, casually dressed and wearing ammunition belts. One held an assault rifle.

Via its Twitter account, al Shabaab confirmed that the two men were part of the group that attacked Westgate.

Kenyan Foreign Minister Amina Mohamed told the U.S. PBS Newshour television show that “two or three Americans” and a British woman were among the militants.

She said the Americans were “young men, about between maybe 18 and 19” years old. She said they were of Somali or Arab origin and had lived in “in Minnesota and one other place”.

Al Shabaab, which said it been in communication with its members in the mall, dismissed the minister’s comments.

“Those who describe the attackers as Americans and British are people who do not know what is going on in Westgate building,” al Shabaab’s media office told Reuters.

A British security source said it was possible that Samantha Lewthwaite, the widow of Germaine Lindsay, one of the suicide bombers who killed more than 50 people on London’s transport system in 2005, was involved in the Nairobi siege.

When asked about reports that Lewthwaite, dubbed the “white widow” by the British media, was directly involved in the attack in Kenya, the source said: “It is a possibility. But nothing definitive or conclusive yet.”

Lewthwaite is thought to have left Britain several years ago and is wanted in connection with an alleged plot to attack hotels and restaurants in Kenya.

U.S. security sources said they were looking into information from Kenya that residents of Western countries, including the United States, may have been among the militants.

U.S. President Barack Obama, whose father was born in the east African nation, offered U.S. help, saying he believed Kenya – the scene of one of al Qaeda’s first major attacks, in 1998, and a neighbour of chaotic Somalia – would continue to be a regional pillar of stability.

Kenyan officials have tried to reassure the country that they are in command of the situation. Officials said there would be a news briefing on the situation later on Tuesday.

“We continue to appeal for calm, keep vigil and avoid Westgate area,” the Ministry of Interior said on its Twitter account.

The attack on the mall is the worst such incident in Kenya since al Qaeda killed more than 200 people when it bombed the U.S. Embassy in Nairobi in 1998.

When fighters from its Somali ideological counterpart stormed the mall on Saturday, they hit a high-profile symbol of Kenya’s economic power.

Kenya has sent troops to Somalia as part of an African Union force trying to stabilise the country, which was long without a functioning government, and push back al Shabaab.

It has also suffered internal instability. President Kenyatta, who lost a nephew in the weekend bloodbath, faces charges of crimes against humanity at the International Criminal Court for his alleged role in coordinating violence after disputed elections in 2007. He denies the charges.

British Defence Secretary Philip Hammond said he believed six Britons had died in the attack. Other known foreign victims are from China, Ghana, France, the Netherlands and Canada. Kenyan officials said the total death toll was at least 62.

Conflicting comments have fuelled speculation about the attackers’ identity. While the foreign minister said there was a woman attacker killed, Interior Minister Joseph Ole Lenku had said on Monday they were all men but some had dressed as women.