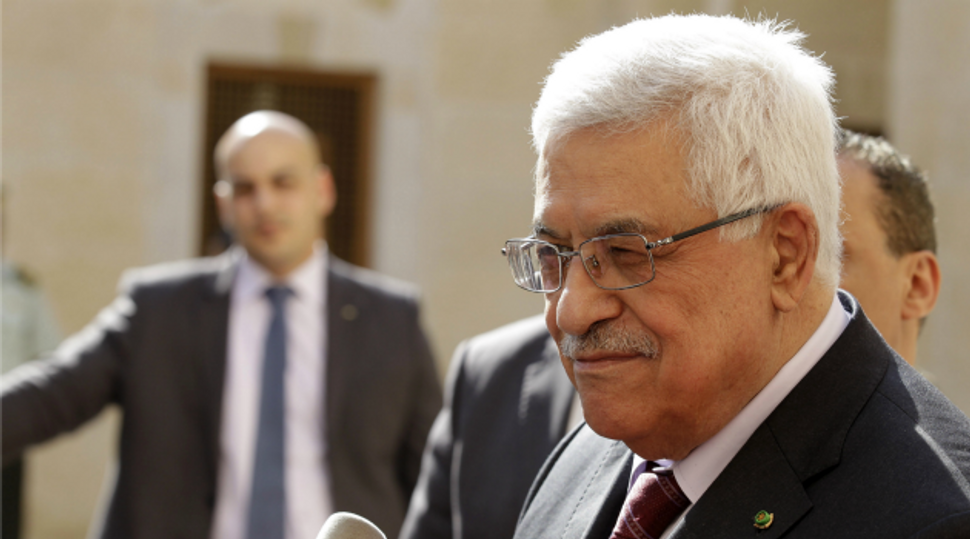 In a meeting with Jewish leaders, Palestinian Authority President Mahmoud Abbas said he was more hopeful now for peace than he was in the mid-2000s.

“If you ask me this question during the intifada, I didn’t have an answer,” Abbas said Monday, referring to the 2000-05 second intifada and having posed a rhetorical question about whether the culture of violence between Israelis and Palestinians could change.

“Hatred, guns, killing, it destroyed everything. Now I can say we have something to talk about. When we talk about living side by side, many people listen.”

Abbas was attending a meeting convened Monday in New York by the Center for Middle East Peace, a group founded by diet mogul Daniel Abraham and headed by Robert Wexler, a former U.S. congressman from Florida.

The meeting was private, but the center distributed notes to reporters afterward.

At the meeting were leaders of the Reform and Conservative movements; Nancy Kaufman, CEO of the National Council of Jewish Women; and leaders of Jewish pro-peace groups. Also on hand were former top U.S. officials, including Madeleine Albright and Sandy Berger, respectively a Clinton administration secretary of state and national security adviser.

Abbas said he remained committed to the two-state solution and urged the meeting participants to press the Israeli government to end settlement expansion in the West Bank.

“We need your support to ensure the successful conclusion of the peace negotiations so that the state of Palestine can live side by side with the State of Israel in peace and security on the ’67 borders,” he said. “I urge the Israeli government to focus on building peace and not building settlements.”

Abbas was in New York to attend the opening of this year’s U.N. General Assembly and is slated to meet Tuesday with President Obama.

The P.A. leader said achieving a final status peace deal within nine months — as envisioned by Obama — was “not impossible.”

Hewing to strictures set by U.S. Secretary of State John Kerry, Abbas would not describe the status of the talks renewed in June under U.S. auspices, but said the United States had a critical role to play in advancing the talks.

Abbas confirmed that he met a key Israeli precondition for the talks, suspending Palestinian attempts to achieve statehood recognition while negotiations are underway, in exchange for Israel’s agreement to release 104 prisoners who have been held since before the 1993 Oslo accords.

Abbas condemned the killing over the last week of two Israeli soldiers by Palestinians, but also called for condemnation of the killings of Palestinians.

“Two weeks ago, four young people were killed by the Israeli army near Jerusalem,” he said. “No one said anything.”

It was not clear to what Abbas was referring, but on Sept. 17, Israeli forces killed one man and wounded at least one during a raid on a refugee camp near Jerusalem to arrest a fugitive.

Abbas noted to the group that six of his eight grandchildren had attended Seeds of Peace, a U.S. program that establishes relationships between youths from Israel, the Palestinian areas, other Arab nations and the United States.